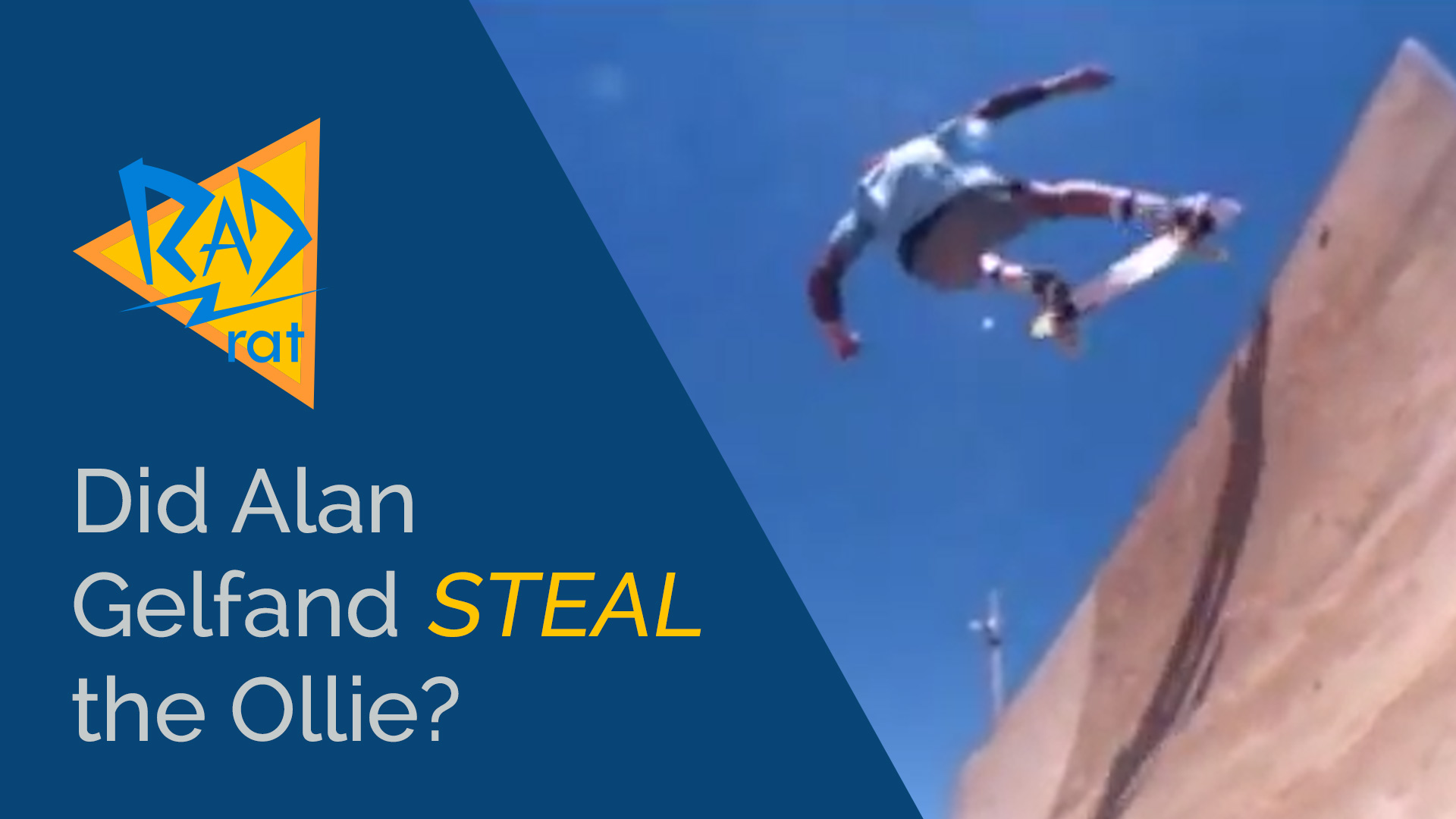 If you do any research on the Ollie, you’ll find two names for who invented it. First is Alan Gelfand, who landed it on vert, and second is Rodney Mullen who did it on flat. Right? Well there’s a guy who claims to have done both variations first. And it actually seems pretty credible. Let’s take a look at the history of the Ollie.

When you get this far back into skating history, things become pretty murky. Footage is hard to come by – because it was the 70s. You would have to actually own a film camcorder, buy film, get it developed, and cut it together. And your local skate crews weren’t really going through all that trouble. So we just have the word of people who were there.

So the story goes, Gelfand debuted his Ollie in 1978, and gained instant fame and fortune.

But there’s an interesting book called ‘The Secret History of the Ollie’. The author went back and interviewed all these guys who were around back then, and this is what he discovered.

So in the summer of ‘77, Gelfand was trying to learn lipslides, and the way he was doing them, all 4 wheels would come off the wall for a second. His friends called it the Ollie pop.

But about a year and a half later, he started showing off his new Ollie Air trick, which is what he would recognize as a frontside Ollie. His picture was in skateboard magazines, and he was even in a movie: ‘Skateboard Madness’…

But did he actually invent it?

Jeff Duerr was another skater at the time, who skated at the same spots as Gelfand. He invented a trick known as the Due Air, or the frontside Ollie. He showed Gelfand, who immediately got really good at it, and the rest is history.

But if this is actually true, why didn’t Duerr blow up and get famous instead of Gelfand?

Well according to Duerr’s article on Ollie physics, the shape of his board led to him doing the trick on steep banks and on flat – which we’ll get to in a minute- but it wasn’t that easy on vert. Gelfand’s board was bigger and slower, which helped control it. He says Gelfand was the first person to be able to do them consistently on vert.

And according to the author of the book, Gelfand loved attention from the media, and Duerr didn’t. If cameras came out, he would just stop skating. Then at one point, someone asked him if Gelfand had taught him the Ollie… and he was so offended that he stopped doing the trick forever.

The author reached out to people from back then and confirmed that this is actually true. When he heard back from Gelfand, he said, “I know you know”. That’s not exactly an admission of guilt, but it seems pretty obvious what he meant.

Now you may have noticed that Duerr claims to have been doing Ollies on flat. In fact, he says that he was Ollieing up curbs and over obstacles in 1978. But he and his friends never figured out how to get any real height. So he still credits Rodney Mullen with the invention of the technique of doing it well – probably meaning sliding the foot up and actually pulling the board up with you in the air. But it’s crazy to think that someone was Ollieing over stuff that early.

And there’s actually another contender for the inventor of the Ollie – Jeff Tatum. Jeff Grosso – the THIRD Jeff in this video now – has an excellent interview with him, where he sits down and they talk about his trick, the JT Air, which we would now call the backside ollie.

It seems like he did invent his version first as well, but it’s backside, and it’s very unlikely that Gelfand STOLE that version of the trick. I’ll leave a link to this video in the description. Check it out for more info about that – it’s a really interesting video.

One thing you’ll appreciate in the video is how blurry the line is here. You could do a one wheeler where you kickturn OVER the coping with only one wheel on the wall, and you can push that a little further into an edger where it’s on top of the coping, then a blowout where you actually get an inch of air. So who is the first person to actually get air on a skateboard? Nobody will ever know for sure. And when exactly does that kickturn become an Ollie? It’s tough to say.

Now there’s no doubt that Alan Gelfand did a lot for skateboarding. Whether or not he invented the Ollie, he definitely made it popular, and that was huge for skateboarding. He drew crowds, and he inspired countless other skaters.

But did he STEAL the Ollie? It sure seems like he did. I wasn’t there, but the author of the Secret History of the Ollie, Craig Snyder, WAS there, and he wrote a 912 page book about it. If you’re interested in that book, check out olliebook.com. That’s also where the article about physics by Duerr that I mentioned earlier is.

So what do you think? Does it matter who invented the Ollie first? Jeff Tatum, in his interview said that no one person ever invents a trick. It’s always being developed by different skaters all over the place. But without Gelfand, we might be saying ‘I just JT’d that 5 set’, or ‘So I did a Due to manual on the box.’ So for that reason alone, I don’t mind that Gelfand got the credit.

1 thought on “Did Alan Gelfand STEAL the Ollie?”