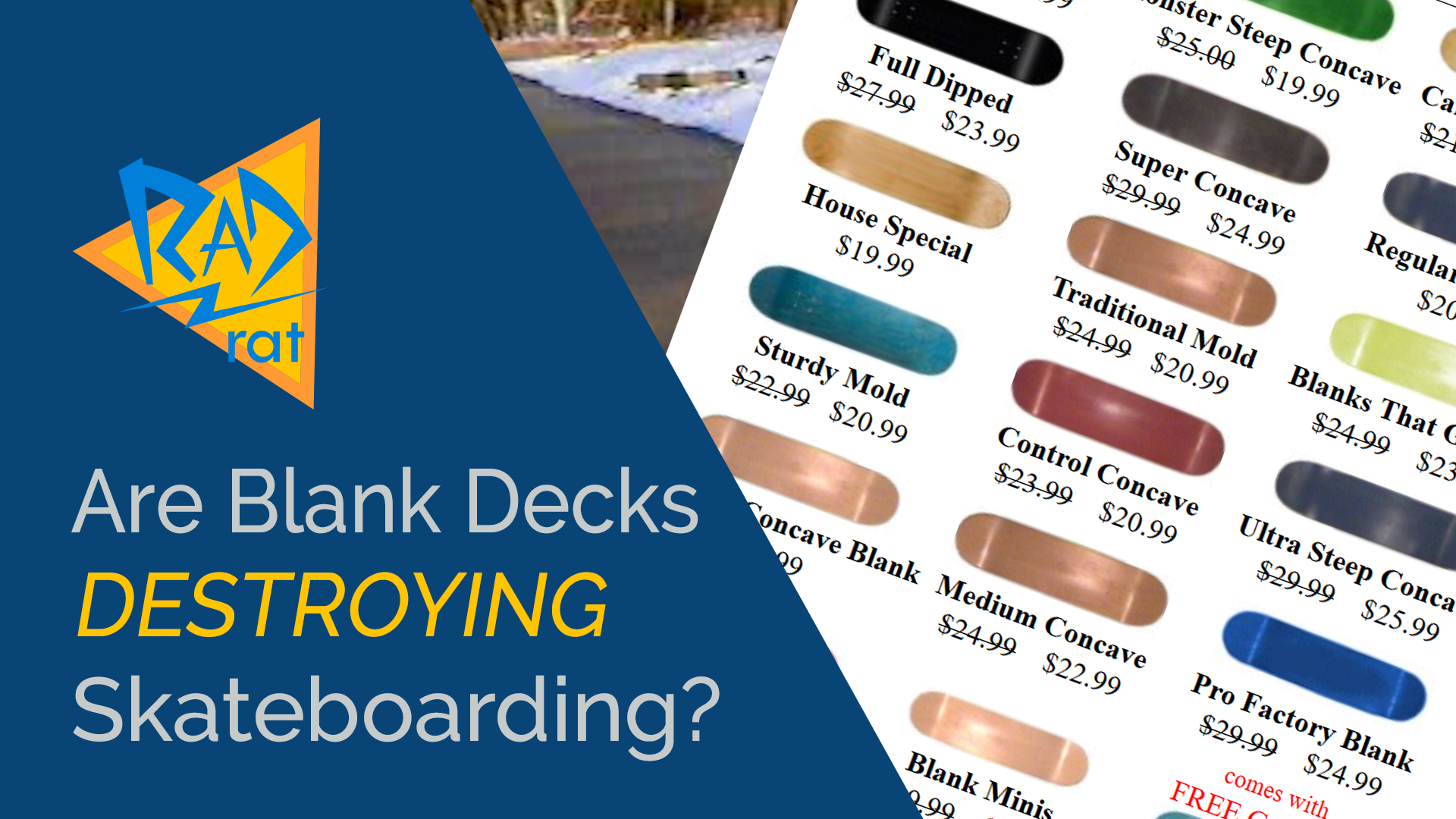 A lot of skaters are using no-brand blank decks to save money. But is that hurting skateboarding in general? Is it worth saving a few dollars? Let’s figure this out.

A lot of new skaters are young. They save up their allowance or cash from raking lawns, and they just want to stretch it as far as they can. Back when I was a kid, I bought tons of blank decks. In fact, I used blankdecks.com and bought them in bulk. If you got at least 10 at a time, they’d be 11 to 15 bucks each, as opposed to 50 or 60 for a pro deck.

And these blank decks are usually made with Canadian maple, and a lot of them are even made in the US. So, as far as the quality is concerned, they’re pretty much indistinguishable from a pro deck. Some say that the glue isn’t quite as good, but in my experience, I’ve had bad pro decks and bad blanks too. It doesn’t really seem to matter.

In fact, back in the day, sites like blankdecks would often heavily imply that these decks were made in the same plants as the pro decks, they were just sold off before the graphics were put on. And they would do this by naming their blanks stuff like “blanks that got pop”, playing off of the Shorty’s motto. So that would mean you’re getting the same build and, but also the same mold for the same shape as a pro deck.

What’s the downside? If big companies aren’t competing by making better products, then they don’t deserve my money. In fact, back then, I would even buy blanks out of principle, like I had to teach… World Industries or Element a lesson. But I’ve changed my views a little bit over the years.

So if you’re paying double or more for your deck, where does that money actually go? There are a few things.

First is pro paychecks. And this is important. For skateboarding to keep progressing and getting better, these guys have to be able to do it full time and not worry about other careers. If you saw my video about the death of inline skating, I mentioned a documentary called Barely Dead. In that video, they talked about how pro inline skaters making a few grand a year, at most. As talented bladers get older, they eventually have to quit skating and get a job outside of it. There are no high end professional videos, sponsors start going away, contests die out… So this is an important one.

The next thing you’re paying for is the art. This one is pretty self-explanatory. Unless you’re painting on your blank decks yourself, you’re missing out on having a nice looking board. It looks better on video, it’s easier to track when it’s flipping. And this is definitely worth a few dollars. Skateboarding is artistic at its heart, and some argue that a blank deck has no soul. No life. No spark.

Alright. What else are you paying for? Research and Development. Not every company is doing this, but you can check out my new technology series to see some of the cool stuff going on out there. You’ve got Plan B with their BLK ICE decks that have the slick layer on the bottom. You’ve got carbon fiber, lightweighting, and all that kind of stuff. Even if you aren’t buying those types of decks, the companies are taking your money and researching this stuff with it. BLK ICE took 2 years to develop before release. There’s research, testing, tooling and manufacturing. If we all bought nothing but blank decks, the industry would never evolve.

And this is the same with wheels and trucks too. Slide plates on wheels, non-slip axles, lighter materials… This stuff wouldn’t be researched and manufactured if we all bought cheap Chinese ripoffs of everything.

And the last thing you’re paying for, which is a little harder to quantify, is just supporting the industry. Companies will take your money and sponsor contests, sponsor new skaters, and generally promote skating. Sure, they’re ideally making money back off of these sponsorships, but it is a gamble. And they aren’t going to be making these bets if they aren’t making enough money to cover potential losses.

Another thing you’re missing out on is the opportunity to support a small company. Maybe there’s a cool local brand in your area, or just a small online company that’s trying something new, like vertical lamination, or other types of new tech. Or maybe they just have really good graphics.

Is it going to make any difference if you, personally, buy blank decks? No, probably not. It’s like anything else. One guy driving a Hummer isn’t going to destroy the environment by himself. But you’re also not doing anybody any good.

Anyway, that’s all I’ve got for this one. What do you think about blanks? Do you think you owe it to skateboarding to pay full price? Obviously, Andrew Reynolds can get by without your money. Do you need to support the big guys? How do you feel about that? Let me know in the comments.

2 thoughts on “Are Blank Decks DESTROYING Skateboarding? Should You Ever Buy Blank Decks?”