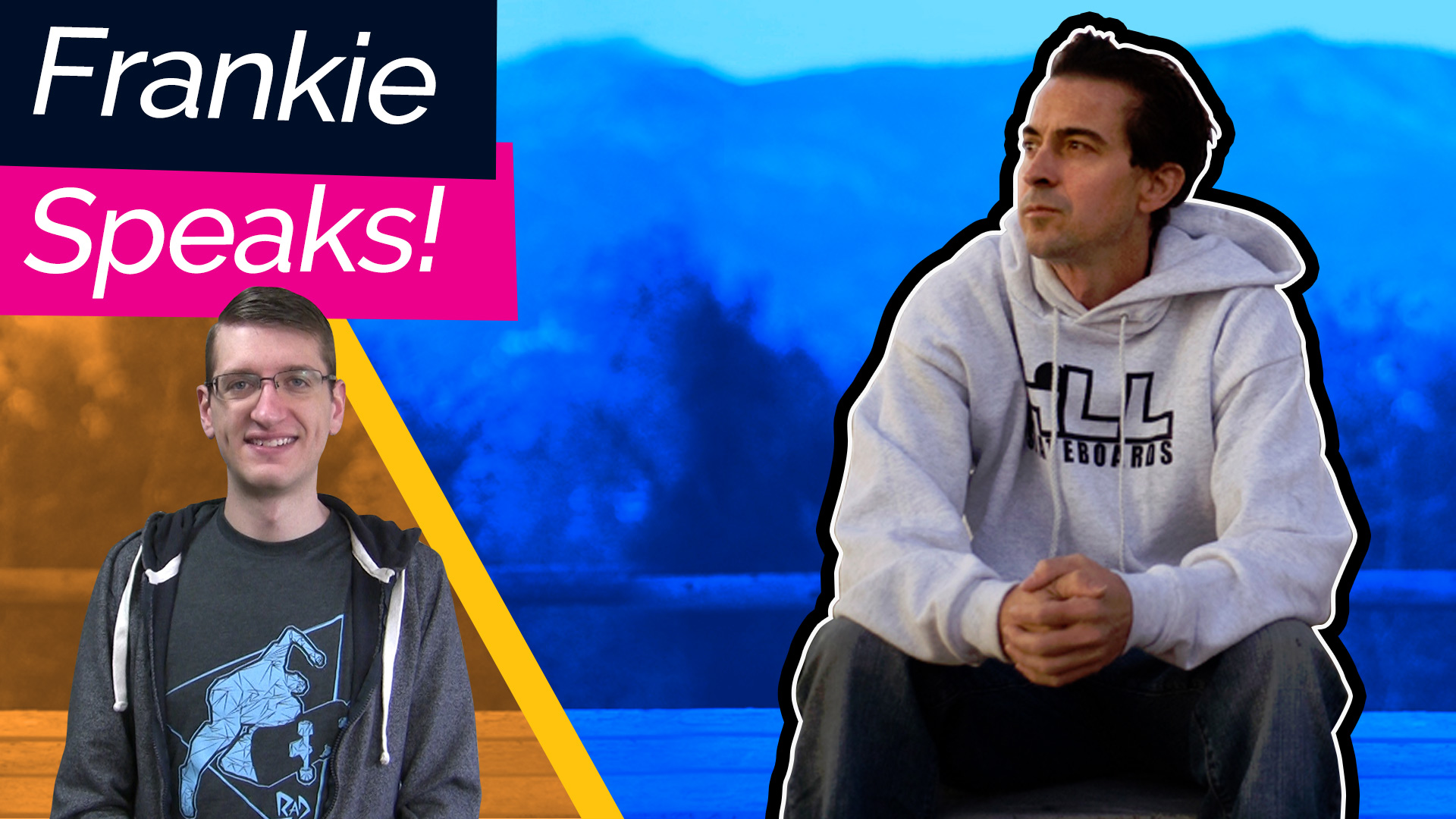 So in my Frankie video, I mentioned that I reached out to him and didn’t get an answer before. A little bit after the video went out, he saw it and replied to me, asking if I had any other questions that he could clear up. I asked you guys on Twitter if you had any other questions, and I got one reply. So this is what I learned.

The first thing to do was clear up exactly what he’s up to in skateboarding these days. It was a little bit unclear with all of the different sites he’s affiliated with and stuff. So here’s what’s up.

The stuff he’s doing is all on hillskateboards.com, which is the same thing as skatehoarding.com. He sent me some videos of the products they have there, like this torture test where they show how strong it is. But they have multiple options, like a hanger for a collectible deck, or one for your setup that you can take off and go skate. I want one of these, but my wall space is pretty much taken at this point.

Also, I showed his old Flash site in the old video, and he says that’s not supposed to be up anymore. So if you want any official Hill Skateboarding stuff, it has to be here.

Also on the legends team of Powell, which I mentioned. So that’s a little more detail on what he’s up to right now, but I had a couple of follow up questions for him that I wanted some comments on.

What’s the biggest thing you had seen someone kickflip before Propaganda? I thought this was interesting, because seeing him kickflip big stuff for the first time seemed like a bigger deal to me. Ollieing big stuff was crazy, but a little more understandable. It makes sense that you can go bigger. But it might have been more of a logical leap to understand that you can kickflip something, catch it with your feet, and drop.

I saw a picture of Mark Gonzales doing a kickflip on a bank and after that I started learning them. I did it from roof-to-roof in Public Domain, and kept developing it from there.
I wasn’t able to find the Gonz picture that he mentioned. I’m sure it’s out there, but I didn’t find it. It’s really cool though. There’s a big difference between seeing a picture of a kickflip on a bank and trying it down stairs. Gotta give him props for that.

How do you feel things would have changed if people had known the truth about the lawsuit? Hopefully you’ve seen the original video here, but the short version is that he got hurt, and got money from workers’ comp. People thought he sued his sponsor Powell and they were upset about it. Here’s the answer:

Yes, I believe things would have been different- I wouldn’t have received so much bad press. I already had a blown knee, and punching me when I was down was a real wake-up call for me. It is finally good to see the truth come out regarding the worker’s comp facts.

It’s interesting to think what might have happened differently. He did make a comeback to skating, but it might have been sooner or in a much different way if he was welcomed back with open arms.

What was it like being a professional skateboarder in high school? His answer:

It was interesting- In my junior year I was beat up almost daily by the jocks at school. I guess it was because I was little, and they saw me as weak. But by the middle of my senior year, the bullies were wearing Airwalks. Let’s just say, they were in my corner after the movie Hook came out and I went Pro. That fame at a young age was the moment being a punk, heavy metaler, and freak, became cool. I’m very happy I got to see the attitude change first hand because of my fame in skateboarding.

That’s really interesting. Skateboarding wasn’t exactly the path to being popular and cool when I was in school, but if one of the kids in your class was a pro skateboarder with a huge brand in skateboarding, you know they would get a lot of respect. Getting beat up by jocks would be completely unheard of. And I did forget to mention Hook. Frankie was skating in it for a quick scene. I was going to mention it, but I didn’t think I could get away with playing a clip for copyright reasons. But screw it. Here’s the clip. [56:16]

So it’s interesting. Sponsored skateboarder? Nobody cares. But being in a movie? Legendary.

The last question tied into that. I wanted to get into his mindset at that time: Did you ever consider college, or was skateboarding it for you?

I didn’t consider college at the time of my senior year. I thought life was going to just roll over for me, but after I blew my knee, worked at a brake delivery company, and all that bad publicity, I came to the conclusion the only thing in this world I will be able to have for myself and not taken away from me would be a education, so that’s why I went back to school.

That is a really good point. Putting all of your eggs in the skateboarding basket is never a good idea. Even for someone with the skill and popularity to pull it off, you just never know what will happen. Always have a backup plan.

Thanks to Frankie for being a good sport with the video and getting back to me with my questions. Hopefully you enjoyed this extra in depth look. Stay tuned for more Retro Rippers videos coming soon.