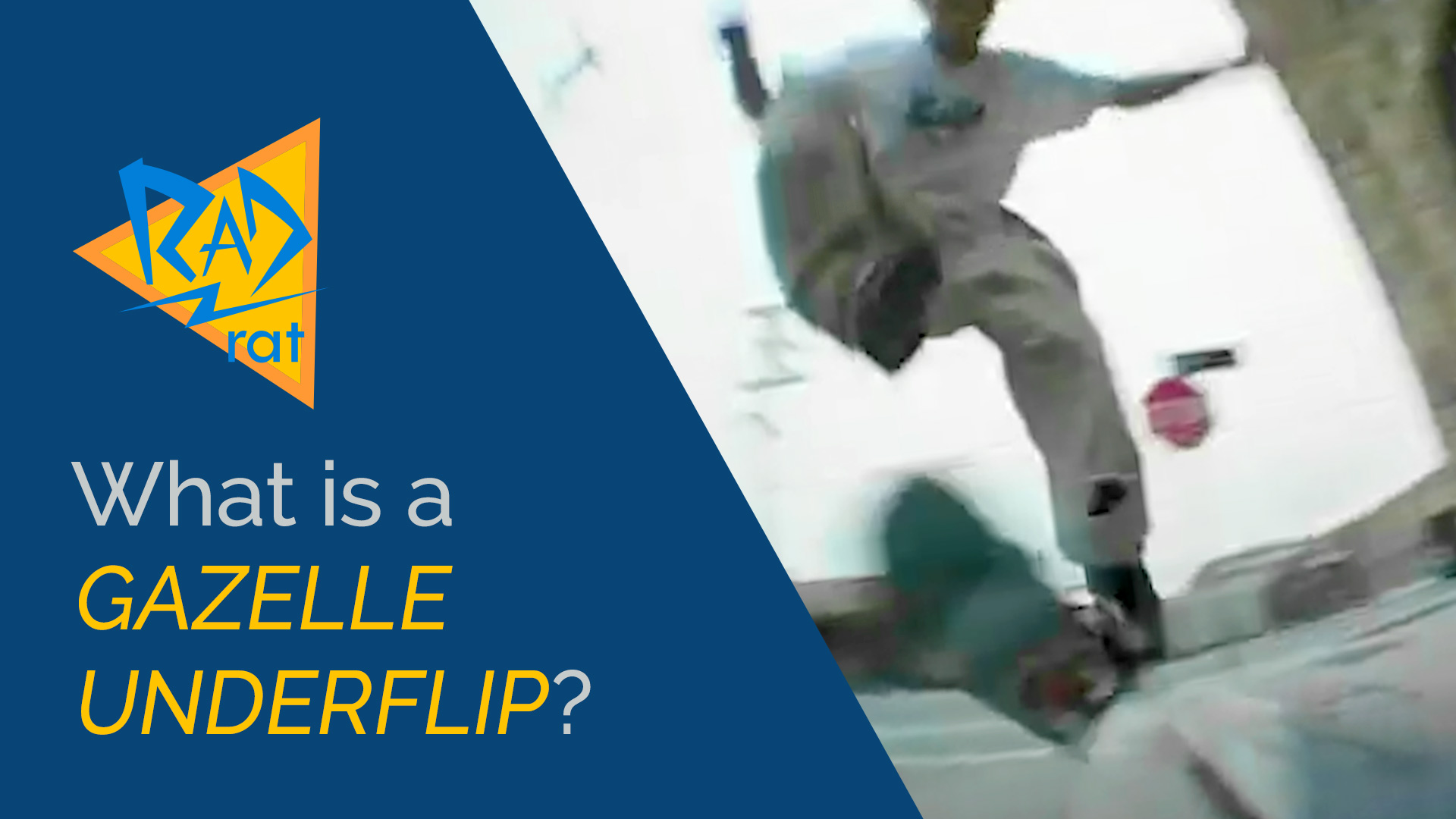 So to understand the gazelle underflip, we have to take a look at the original gazelle. It’s a trick Rodney Mullen invented back in the early 80s, and it’s what we would call a nollie backside 540 shove it with a 360 body varial. So a nollie bigspin with a full extra 180. But nobody considered it nollie back in the day, that’s just how you did shove its. You would put a little weight on the nose to unweight the back wheels, then throw it with your back foot and twist your front ankle.

360 and 540 shove its were very common in freestyle routines, and Mullen even did a 720 one on film. Actually, there are freestylers these days doing 720 shove its like that too.

But one of the most popular variations of the shove it was the gazelle.

You know, it’s interesting. Mullen was doing gazelle kickflips off the tail in 1992. I don’t know what people would have called it at the time though, since gazelles had to be nollie. But that’s skateboarding for you.

Another trick Mullen started doing in the 90s was the 360 double underflip. You’ve seen him do this trick a bunch of times. When I was a kid, I thought he just had weird looking 360 flips until I watched it frame-by-frame.

So an underflip is just when you get your toe under the board, pull up and make it flip. It doesn’t matter how it gets there, but one of the easiest versions of it is the shove it underflip. And it’s also pretty easy to keep the spin going and do a 360 underflip.

Rodney Mullen even did a 540 double underflip too. I remember back in the day, everyone would argue that this was a 540 flip. Not even double, and they thought he was flicking it. But look at his back foot. People still argue on YouTube about it, and that’s beside the point anyway.

So Rodney Mullen stumbles out of Paddy’s Pub and starts skating home. He winds up and throws a trick off the curb out front. He pops nollie backside, and after the board spins 180, he catches it with his toe and starts an underflip. He finishes a 360 while the board spins 540, and rolls away into traffic.

So Mullen does the underflip with his front foot – which is crazy. You know, he doesn’t always use the foot you would expect for underflips. In regular and fakie, he does kickflip underflips with his flicking foot, but in nollie he uses his front foot. Most people would say that it doesn’t really matter which one you use, BUT with gazelles, things start to get a little bit blurry.

This is an old school 360 kickflip. I do them in the original, feet together style. But other guys do them like this. This is Tony Gale, a pro freestyle skater. He spreads his feet out more and even does a little hint of a nollie there.

If you go all out and pop it completely, it’s a nerd flip. This is a Robby Williams trick. He started doing these about 10 years ago and that’s what he called them.

If you take it one step further, you can do gazelle nerd flips, which is a gazelle underflip with the BACK foot. It’s a little easier because you can do a little extra scoop with your back foot as you start the flip. So is this the same trick as Mullen’s? I wouldn’t say so.

But, Robby took HIS trick a step further than that and did 720 gazelle nerd flips, which he calls the bull flip. An absolutely crazy trick, but something that would probably be impossible with only the front foot.

So as you can see, it can get messy. Is it an old school kickflip, or a nerd flip, or an underflip…? Which foot do I use? Hopefully this helped clear that up a little bit. I think if Mullen invented gazelle underflips today, we would probably have to call it a nollie backside gazelle front foot underflip. Just because people have done all these different options by now.

If you liked this video, hit the like button and don’t forget to hit my logo on screen to subscribe for new skateboarding content like this every Tuesday. AND sometimes bonus stuff on other days of the week. What do you think about the gazelle flip? What’s your favorite Mullen trick?