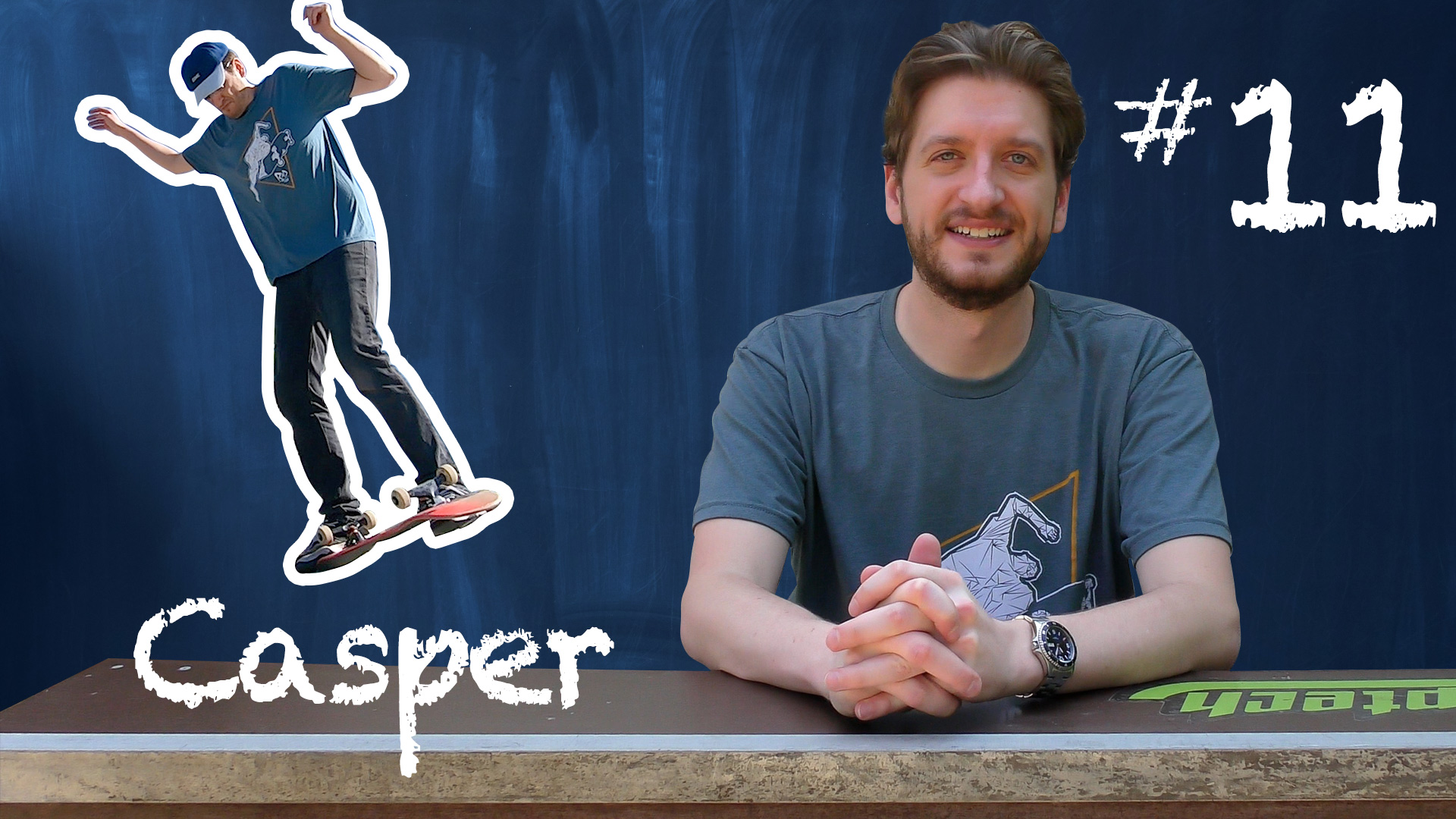 This week, we’re going to learn our second freestyle trick, the casper. It’s like a manual, but with the board upside down! This trick is so cool that seeing it made me want to start skating in the first place. Let’s give it a try.

Heelside railstands and kickflips are both really helpful while you’re working on this one. There are a couple different methods we’re going to use for this one, so you’ll probably find a way that works for you.

The classic version works a lot like a heelside railstand. The one where your front foot tips the board over and your back foot pulls it up. This is a bit more extreme because we’re flipping the board all way upside down.

Put your front toe right in line with the front bolts, but all the way on the edge. Your back foot should be hanging off the toe side of the tail quite a bit. This is another two-footed trick, where your front foot will get the board on its edge, and your back foot will pull it the rest of the way over.

And it helps to be rolling fakie. It can be done stationary or even rolling forward, but those are harder. The momentum will put extra pressure on your back foot, which should help you hold the board in a proper casper position.

When you’re ready, start to tip the board over, and hop backward a bit. Since the board isn’t flipping in the air, it’ll end up a few inches behind where it started.

Push down with the front foot quickly and sharply while pushing it ahead of you, then hook your toe and get ready to catch the board. Your back foot should come off the board when it starts to flip, but put it back right away to catch that tail and begin to put your weight on it. Let the backward momentum push you more onto that back foot, and pull the nose up in the air.

At first, it’s okay if your front foot touches the ground. But try to get in the habit of doing it without touching as quickly as possible so you don’t engrain bad habits. Technically, neither foot should touch the ground. But on a street deck, it’s very common for your back shoe to touch the ground a little. As long as you aren’t putting weight on it, you’re still okay.

Once you’re in the casper, hold it for a second and then get ready to land. The most common way to land, by far, is to do a shove it. The technique is not much like a regular shove it. You’re pulling the board up and over with your front foot while you hop and give it an extra boost with your back foot. And while the board is spinning and flipping at the same time, it’s simpler than it looks. All you’re doing is jumping, pulling your feet together and then back apart. The board doesn’t leave your front foot, so it’s easier to control than you might think.

The other method I like to use is a straight half flip. It’s a little less exciting, but it’s even easier. It’s helpful to learn both methods, because the shove it works great if your weight is on your back foot. And the half flip is best if your weight is starting to fall back toward the front foot. If you learn both, you’ll be in the perfect place to land these pretty much every time.

All you do is let your weight start to drift forward, then hop up. Use your toe to tip the board back over and land on it.

The second way to get into a casper is with a kickflip. The major benefit for this method is stability: the foot position is a lot more comfortable. But landing your back foot solidly on the tail without it slipping out can be tough.

Set your feet up like a kickflip. Pop the trick like usual, but you want to do the lightest flick you can. If you look closely, you’ll see that the board flips over with only ankle motion. You can’t flick and follow through with your whole foot, or else you won’t get your foot back in position on time. You tip the board over gently in the air with your foot, and then catch it on the bottom. It can be a strange feeling, flicking down through the board and catching it.

Meanwhile, your back foot should be ready to land on the tail. Keep it very close to the board. With a kickflip, you generally want to start the flip and pull your feet out of the way. In this case, you want to keep them very close, and it should feel more like a transition than a pop, flick, catch, and land.

Once you’re in, land in whichever way is most comfortable.

The biggest issue I see with the casper are balance and foot touches.

Keeping your balance while rolling backward in a crazy foot position is really tough. To me, it’s the hardest part of the trick. Other than just practicing, you can try doing it off the nose. Traditionally, caspers are on the tail, and the technique of getting the board to flip is going to use the same foot motions as a heelside railstand. But if you try nose caspers, you’ll get to roll forward. That can be a bit easier for some. To me, they feel more awkward, but that might not be the case for you. I’ve been doing them off the tail for a long time.

The other major problem I see is letting your front foot touch the ground. In fact, I used to think I was amazing at caspers before I realized that this wasn’t an optional style choice. I was tipping the board over, standing on the ground, then easily doing 360 flips and landing. If that’s the best you can do for the sake of this course, I’m not mad at you for it. But if you want to get more into flatground tricks like this, it makes sense to get used to the balance aspect of it. If you’re having trouble catching the bottom of the board and holding it up, consider trying the kickflip version. With your front foot in the air and flicking already, it’s much closer to the position it’ll eventually end up in.

If you’re doing the fakie version of this trick, try adding in a spin. A half cab casper isn’t too tough, and it feels really good to do it and get the shove it out too. 360s can be good as well, especially if you do it on a bank.

Aside from that, there are a million ways to take the casper. Do a shove it with a quarter flip instead of a half and land it to rail. Do a full flip and land it back to casper. Do a varial one and a half flip out. The sky is the limit with this one. Rail to caspers should be in your reach too.

Don’t get obsessed with filming. It’s a lot of fun, but it’s not everything. It can add a lot of stress to your skating that doesn’t have to be there. If something isn’t fun anymore in skating, don’t do it. It’s not your job.

Practice your noseslides a bit. Next week, we’re doing our first grind. So refresh yourself with the feeling of doing those noseslides to get yourself back in the right head space for our last trick.

The last trick of this series is a 50-50 grind! Once we get this one, you’ll have a really well-balanced basis for your skating! I’ll see you then.