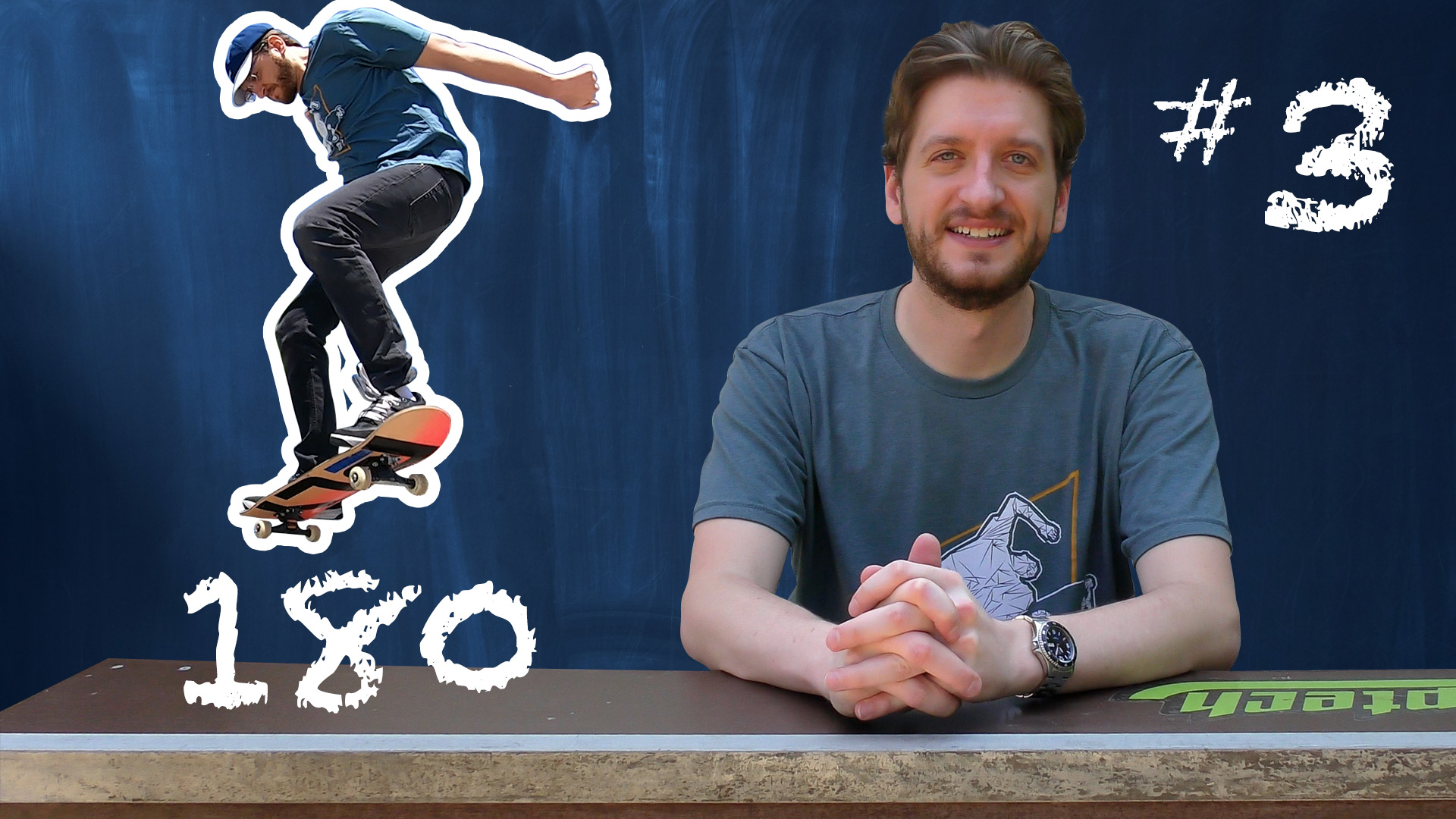 Welcome back to Shred School 101! At this point, you might be itching to learn kickflips, but I don’t think we’re quite ready yet. Learning 180s is a good way to build some more confidence with landing without being too heavy technique-wise. Once we get these down, we’ll have the strongest base we can for the kickflip. But it’s not like this is a skipper either. You’ll be doing 180s forever, so it’s helpful to have locked.

Ollies are obviously very important to do these. Pop shove its help, but not directly. We learned backside pop shoves its last week, but we’re going to focus on frontside 180s. But the fakie 180s will be backside, so the skill might transfer a bit. Let’s give it a try.

For the first time, I’m going to recommend going directly into rolling for this one. Learning the trick stationary is going to be a bit confusing. You can probably do the whole trick in the grass without ever leaving the ground. But that’s not going to be very helpful, long-term.

We’re going to be doing this frontside, since it’s a bit easier. Frontside means that you can see the direction you’re going during the spin. I also think the technique is a bit easier, but that can vary from person to person.

Your foot position should be similar to your ollie position, but your back foot should be more on the heel side. It gives you some more room to push the tail around as you do the ollie.

There are two keys to this trick. Your shoulders and the scoop. Getting the spin is going to be mostly in your shoulders, so be ready to wind up and unwind as you pop. Your back foot is going to scoop the tail forward, which will help keep it beneath you as you spin.

So, set your feet up, wind your shoulders, and start spinning on your way into the pop. As you pop, do it quickly and decisively, using your foot and ankle to get some extra springiness out of it.

What you want to see is a solid landing. Even if you’re underrotated, that’s okay. It’s much, much better to land on the board with all your balance than to get the full spin and land separately from it. If you’re underrotated, you can do a bit of a nose pivot to roll away. You shouldn’t be going so fast that landing sideways is a major problem.

As you get a little bit better, you can work on landing with your weight forward by the nose to make that pivot a bit more natural.

In time, you might not need to pivot at all. As you start ollieing higher and higher, you can get leveled out about halfway through the spin and then push the board around the rest of the way on your way down.

The toughest things about this trick are getting the full rotation and keeping the board with you. If you’re having either of these problems, I’m here to help.

Remember, rotation starts at your shoulders. Where your shoulders go, your hips will follow. Where your hips go, your feet will follow. If you’re only landing halfway through, wind up more and put a little more juice in it. Don’t be afraid to exaggerate the motion if it helps. Your focus now is to land the trick. You can clean up the style later and get to a point where it looks a little more smooth.

If you still aren’t getting all the way around, but your shoulders are rotated, the problem is more likely to be in your scoop. But it would be a good idea to record yourself trying a few times to confirm that that’s the problem.

If you’re having problems with the scoop, keep in mind that it’s not the same as the way you would pop an ollie. Push the board out ahead of you and backward in the direction of the tail. This helps counter out the way the board wants to travel on its own.

If all else fails, aim yourself at some grass. Then you can really crank out the spin and not worry about balance as much. Troubleshoot it that way and then take it back to the pavement.

Aside from just doing the trick faster and higher and smoother, you can advance by trying the half cab. Steve Caballero invented the fakie 360 ollie back in the early 80s. We call a fakie 180 a half cab. The trick to this is that the easier way to half cab is backside, which is the opposite direction that we’ve been working on going forward. Spinning backside is usually easier to do, but harder to land. Luckily you’ve got a bit of a way to cheat this one. Rolling away regular is easier than fakie, and if you turn as you set up for the trick, you can spin barely half of the way and still roll away fine. You’ll want to work on that, but it’ll at least get you going.

Practice manuals in parking lots. You can measure your progress by seeing how many spaces you’re able to manual over before you lose your balance. And manualing with a target in mind is good training for when you’re ollieing into manuals on boxes.

Keep working on those 180s and half cabs. Ideally, I want to see you being able to 180 over a small obstacle. It can be something as simple as a sidewalk crack. But rolling up to something, timing out the trick, and landing after it is good practice for the future.

Next time, we’re going to learn the kickflip! Make sure you’re rested up and ready, because it might be a tough one.