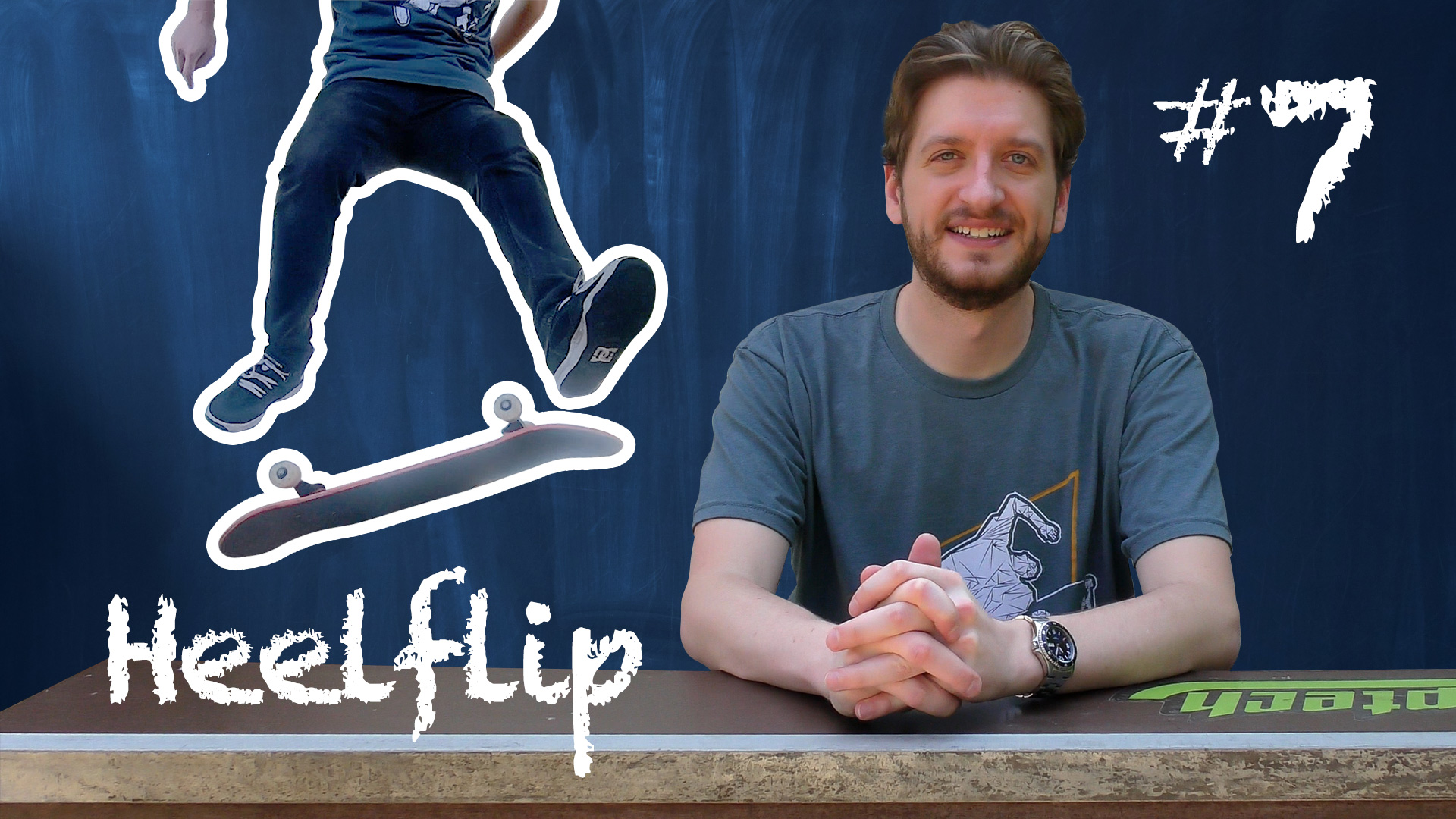 The whole point of this series was that I haven’t been able to skate due to injuries, and I have to relearn my tricks. So it seemed like the best possible time to teach them, with all the challenges fresh in my mind. And I’ll be honest with you. For me, this trick was by far the hardest to re-learn in the series. That doesn’t mean it’ll be the hardest for you. It should be a bit easier than the kickflip, now that you’ve got some experience with flip tricks.

A strong ollie is important for this one. And a pop shove it for the sake of having some landing practice. Kickflips aren’t necessary, but I do think it’s a bit easier to learn, so I recommend going for that one first.

In general, this trick is a big ollie, and once you’re in the air, you kick your front foot out like a soccer kick. But the details are what makes this complicated.

Your foot position is going to vary a bit, but I’ll give you the variables. Your back foot is basically like an ollie, except a bit more toward the heelside, to balance out your front foot. Although, where your front foot is where it gets weird.

To get the most possible flip, you can actually tilt your foot a little bit backward so you can grab the edge of your heel better, and you can have it be way down toward the middle of the board. That’s probably the easiest way to get a flip.

But for me, the trick only works if my foot is right before the bolts, and with only a little bit of my toe hanging off. The more toe that hangs off, the more behind me the board will fly. We’ll talk about getting around that in the troubleshooting section. For now, just find something comfortable and give it a few tries.

The way I described the trick is exactly how it feels to me. It starts with just a standard ollie. Pop it, start sliding your foot up. Halfway through the trick, it feels like, you could just land as an ollie and nothing would happen. But once you’re entirely in the air, you kick your front foot out. To me, it feels like I’m at the peak of my ollie and I’m about to start coming down when the flip starts. But that’s not actually what it looks like.

The feel of this trick is why it used to be so easy to me. It’s just an ollie at first. The flip feels like an afterthought.

What makes the flip tough though, is the fact that your leg is now in the way and you can’t really see it. That’s why I suggested the kickflip first, for the sake of having some experience landing on the board. Or in this case, a little bit of blind faith that it’ll still be there. Once the board is flipping, pull your feet up out of the way, and land it like a regular ollie.

Most of the troubleshooting is going to come down to foot position. For me, the more my foot hangs off the board, the more likely it is for the board to fly behind me. With the board being hard to see, adding in a blind landing behind you can make it even tougher.

But if I move my front foot further up and pull my toe back a bit, then the board sticks to my foot and flies ahead. There’s a sweet spot where it’ll stay exactly with me, which you’ll see in the clips.

I’ll give you an extra option too. My friend Tony puts his toe even with the edge of the board, and he somehow flicks with his toe. It works great for him, and this is the technique I used to learn switch heelflips. But I didn’t re-learn them yet to show them for the course.

Also, all the troubleshooting tips from kickflips still apply here. If you are landing one footed, film it and make sure you’re actually getting a decent ollie and airtime. You might be planting your foot right as you ollie. Get as much air as you can. That’s why I recommended having a strong ollie before working on this one. You’ll need at least a little height.

It’s also fine at this point to be skating in the grass, or the axle stall trick I showed you with kickflips. And again, it’s always better to land the board halfway flipped than to do the full flip but not land it. Keep tweaking that foot position, and you’ll get it!

If you started this one stationary, try taking it rolling. If it’s easy for you, try it fakie too. I taught varial heelflips a few years ago if you want to take a look at that later, but most heelflip variations are much harder than the rest of the things in the course. So just focus on doing them as well as possible for now.

Play SKATE. SKATE is like HORSE in basketball, where one skater sets a trick, and the other one matches it. If you have a friend who’s at the same level as you, it’s a good way to learn tricks from each other, and it’s a lot of fun to do. Watch some pro games of SKATE from Battle at the Berrics to see it in action.

Try to get a bit more comfortable with rolling fakie. If you skipped the half cab from earlier, take some time to see if you can get that down. The next trick will be fakie, so having at least some comfort with it will get you ready for that one.

We’re doing our first complex trick, the fakie bigspin, which combines a half cab and a shove it. Are you ready?