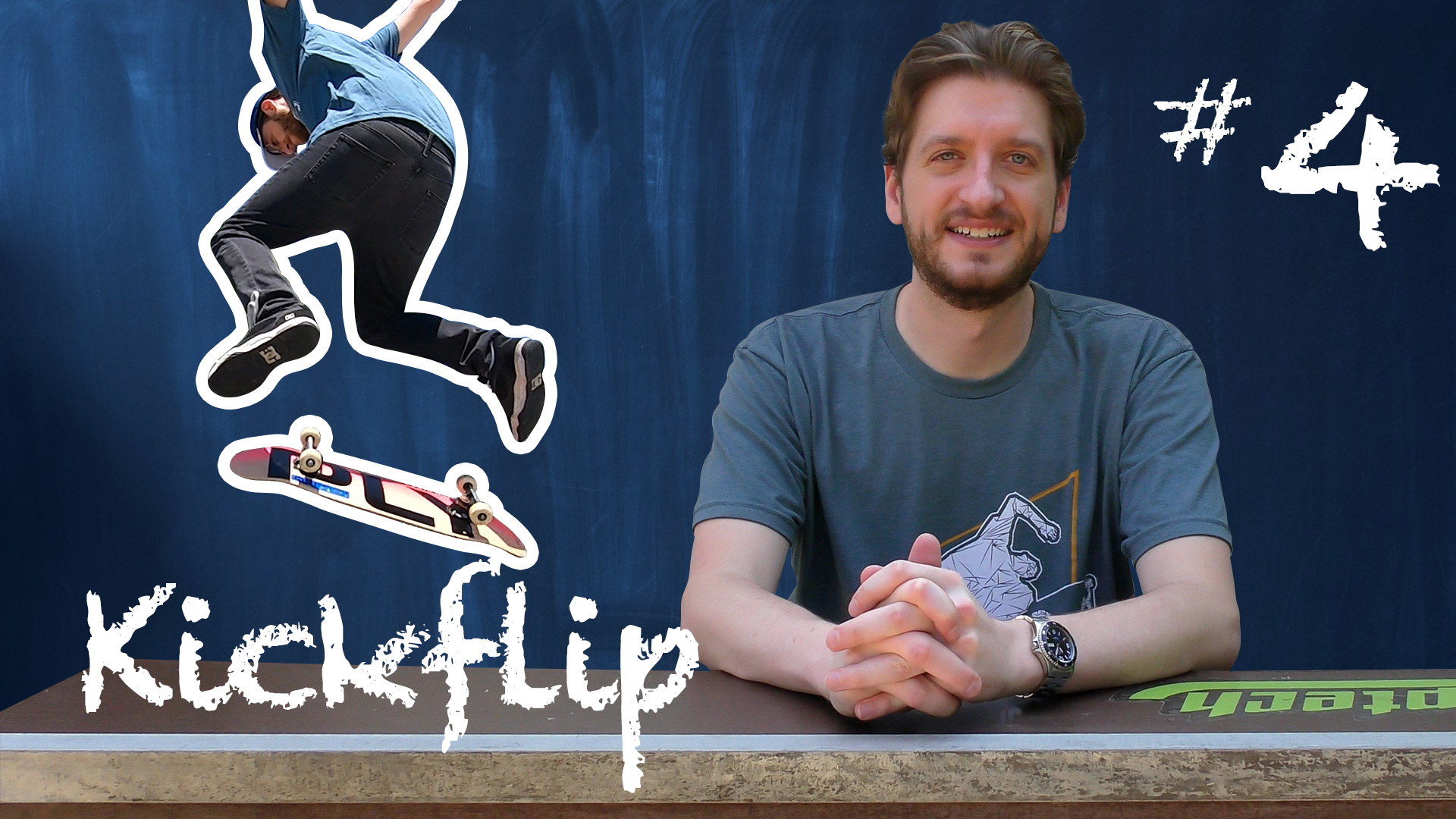 Here it is! Time for the kickflip. This time on Shred School 101, we’re going to land our first true flip trick. Sure, the pop shove it is technically a flip trick, but it’s not really the same thing as having the board be completely upside down in the middle. This one can be tough, but I’m going to give you all the tools you need to put all 4 wheels down as quickly as possible.

A strong ollie is all you really need to be able to do this. Pop shoves and 180s are helpful for confidence, but they aren’t directly related. I also want you to take a minute and learn this. Stand next to the board with the tip of your toe underneath. Flip it over and hop up onto it. Seeing the board flip and landing on it will be a big confidence booster that will help you get a feel for the trick.

Start off with your feet something like this: back foot in the ollie position, and your front foot about halfway up the board, with your toe pointing forward. This is a pretty exaggerated foot position that you’ll eventually end up adjusting over time, and I can’t even do them this way anymore. But it’s the easiest way to learn, so I’ll still recommend that. In general, the pointier the front foot is, the quicker you can flip it. As you get better, your focus will be more on height, which this position isn’t great at. But we’ll worry about that later.

For this one, I’m going to recommend going back to stationary. In general, since the board isn’t spinning, it’s less of a problem to do the trick stationary and learn how to take it rolling later. With this one, there’s a bit of a fear factor of looking down and seeing the board upside down and committing to landing on it. Doing it stationary at first will help alleviate that to a degree, so hopefully you can build some confidence with it. Try to do it rolling as soon as you get it though.

What you’re doing is ollieing, and as your front foot starts to slide up the board, you flick your ankle and get the board to flip. Pull your foot back over the board and land on it. It seems simple, but it’s a completely new category of trick, so it’s going to take a little time to get the hang of.

‘Flick’ is a term you’ll hear a lot in skateboarding, and it refers to the motion your ankle makes to get the board going. You point your toe down so that your leg can move out from the board, then flick outward, off to the side of the board so you don’t just kick the nose.

Do it right, and the landing is just like an ollie. But there are a lot of things that can go wrong. Let’s walk through some of those.

If the board isn’t flipping at all, it’s probably a timing issue. This happened to me when I was trying to learn the trick. I would pop the tail very lightly and immediately start the flip. But the board wasn’t off the ground yet, so nothing really happened. Don’t forget the ollie part of this trick. You still need to get up and off the ground before you start the flick. You might even want to think of it as an ollie late kickflip instead of just a kickflip to get yourself in the right mindset.

But if you get the board flipping, there are still some problems that can come up. The biggest one I faced was landing with one foot. For the longest time, I could land with either my front foot or my back foot. And I just assumed that eventually, I’d get lucky and land with both. But what I was doing was making that impossible. Record yourself doing a few and see if you’re doing what I used to do. I would pop and flip the board, and I would either plant my back foot on the ground right after the pop, or I would flick straight down to the ground and plant my foot. One of my feet was on the ground before the board was, so of course it was impossible to land.

Focus more on the jump. I was getting a decent enough ollie, since the board was flipping, but I was letting the board do it without me. Jump higher, and pull your feet up to give the board room to move. It’s a hundred times better to land a half flip with both feet than to land a full flip with one foot.

If you can get that half flip with both feet, you’re on the right track. Keep working on that pop and flick, and you’ll get it before too long.

What if you’re landing, but you’re shooting out? The culprit is most likely this foot position I told you about. Having your front foot so far back makes your whole center of balance around the back truck. Land just a little bit off, and you’ll be in trouble. The real solution to this will be when you start to move your front foot further toward the nose, and you’re free to try that. But you can also pop the board slightly backward while you pop. But don’t forget that it’s still okay to cheat.

When I finally landed this trick, I was halfway on the grass, holding onto a guard rail. It should be pretty flat, unlike the clip I used here, since that was all I could find. But you can’t slip out if the board can’t roll, so you can build some confidence with the trick and get more stable with it before you take it back to the concrete.

Another option is to try to set the board up in an axle stall with the grass behind you. A kickflip naturally travels a little bit behind you as you do it, so you can’t still start on pavement but land in the grass for a bit of a half step. If you’re struggling with it, it’s worth a try.

The first way you’re going to want to advance with this trick is to do it rolling. The trick feels pretty much the same when you’re rolling, so it will be mostly a mental challenge and not a technique one. But if you did the pop shove its while rolling, you should be ready.

The next thing is to get a little bit more height and a catch. When you learn this trick, you’re probably going to flip it and just land on it when it’s done. When you start to get more height, you’ll have to catch the board in the air so it doesn’t flip too much. But thankfully, there isn’t much to teach there. You’ll do the same kickflip and landing motion in the air, but you’ll be a little bit higher, and you’ll just ‘land’ while you’re still in the air. Catching a trick comes pretty naturally, so I wouldn’t be too concerned about it.

But how do you get more height? Keep working on that ollie, and slowly start working that front foot into a more ollie-like position. The height of a kickflip comes from flicking off the nose, which pulls the board up in the air and helps it level out.Getting height without leveling the board out is called a rocket, and it’s a good way to get yourself hurt, so be careful out there.

Watch old skate videos. Most likely, you’re watching a lot of modern stuff on YouTube and on Instagram. But check out older eras of skateboarding videos too. Styles changed a lot, and you might see some tricks that you really like that aren’t as popular these days. The old Plan B videos from the early 90s are favorites of mine, and a lot of stuff from that era are available on YouTube. Check out some Powell Peralta videos from the 80s too. More knowledge is never a bad thing.

The only homework I have for you this time is to practice. This trick is tough. Don’t feel bad if you don’t get it right away. Next week’s trick is going to be pretty easy, for the sake of giving you a bit of a break, and more time to practice this one. But if you got it locked down already, try doing it rolling fakie. There’s no special trick to doing it, it just feels weird and the balance will be an issue. But it’s a good challenge.

Next week, we’re going to learn the railstand, which means standing on the edge of your board. I’ll show you a couple ways to get into and out of this position as a fun way to expand your trick vocabulary.