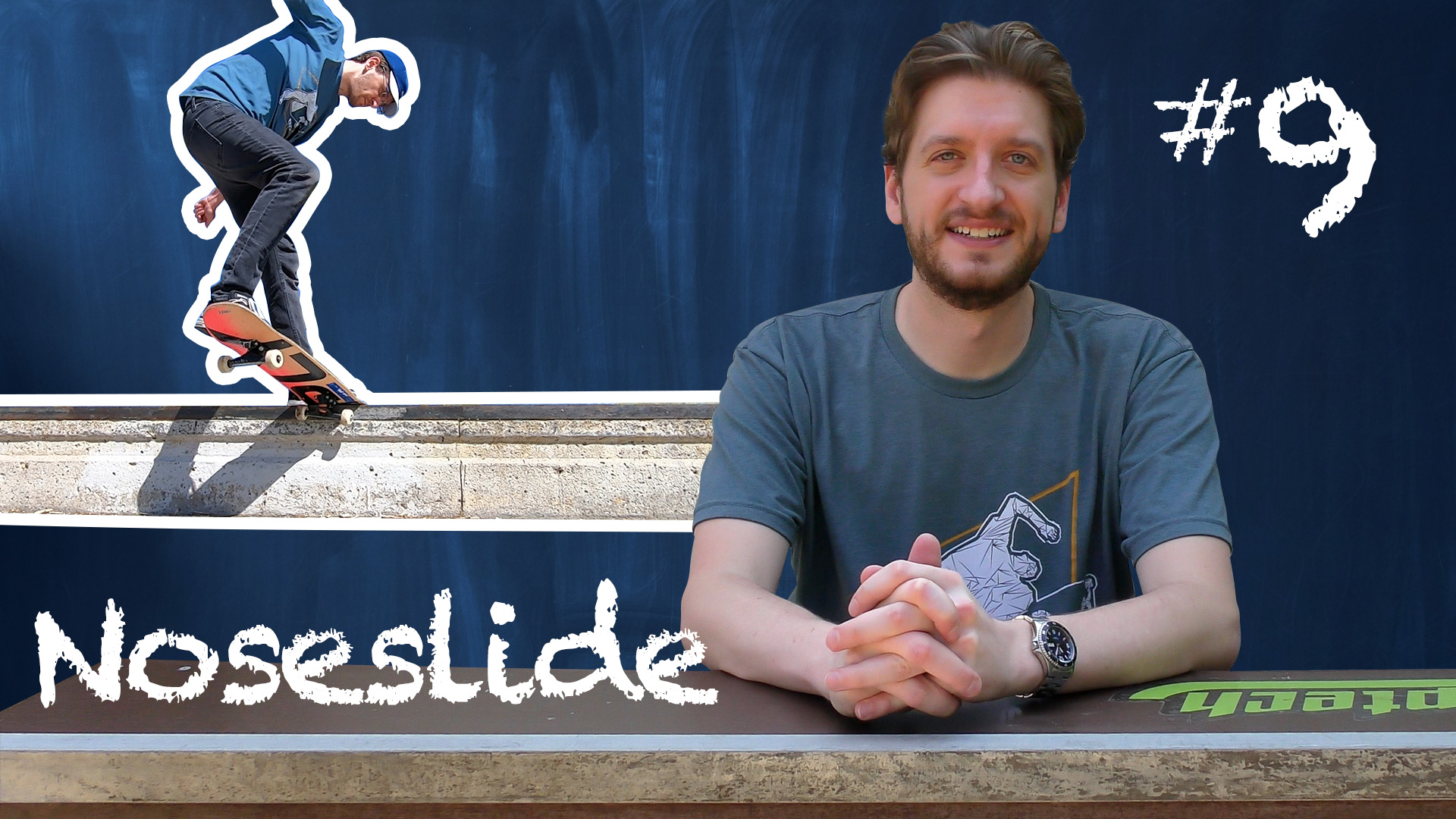 This week, we’re going to do our first grind or slide trick, the noseslide! We’re in new territory here, but I think we’re going to have a good time.

Being comfortable on your board and rolling both ways. You’ll need to ollie when we start doing them higher, but you can learn this trick with almost no tricks under your belt. But I put it this far in the course because confidence and landing ability are a factor.

The noseslide is the easiest grind or slide that you can do. Boardslides are easier on rails, but I recommend learning this on either a well-waxed curb, or a small box with coping at a skatepark if you can find one. Stick to a curb that’s already waxed, if possible. It can take some time to break in a new curb.

To start, put your back foot on the tail and your front foot directly on the nose. All you’re going to do is a slight kickturn right onto the curb and shift your weight. But before we get to that, let’s do it as a stall.

Approach the curb with a pretty sharp angle. Don’t do it straight on, because you’ll want to practice that turn a little bit. You need just a little bit of speed for this. If you go too slow and you don’t get your whole nose on the curb, you could slip out.

There isn’t much technique here. Pivot just a little bit, and hop to your front foot. Stall for a moment, and land by dropping in switch. This is the ‘slappy’ version of the trick, meaning that you just pushed the board onto the curb instead of ollieing. You can do slappy versions of many different grinds and stalls.

Once you’ve got that, you have the basics down. Doing that with a bit less of an approach angle and more speed, and you should be able to get a bit of a slide.

Before we do this, give the curb another coat of wax. The curb I’m skating is really chunky and rough. I waxed up the curb and also the nose of my board, which can help as well. Don’t be afraid to put a ton of wax on a curb at this point. If you’re at a skatepark, hold back a little though. You don’t want people slipping and getting hurt because you’re learning.

So roll up to the curb with a decent amount of speed. Pivot and shift weight to the nose. When it makes contact, you have to commit to the slide. It’s really easy to get here and then bail and step off the nose. You need to commit by pushing the nose ahead to get it going and just using your weight to force the nose ahead.

If you slide a few inches, you’re in good shape. More speed will help you slide better, but you’ve done the trick. At this point, you can drop in just like you did from the stall, and you’ll roll away fakie.

Try rolling away forward though. It’s a much better way to land this one. In general, it’s more respected to have to speed up the slide at the end. So, pushing the nose to slide a little quicker is better than letting it stop and pivoting around it.

But it isn’t much harder off of a curb. You can start to drop in and just pivot forward. On something low like this, there’s no air time to mess you up. Shift your weight back to the tail and pivot away from the curb. When you slide on higher things, that pivot will happen in mid air. If you can land and roll away from this in both directions, that’s really good progress.

The noseslide is a technically simple trick, but that doesn’t mean you won’t have any problems. Let’s look at a few.

The first is a missed lock-in. On the right sized curb, this shouldn’t be very common. But it’s possible to lift the nose too much and land with your wheels on top of the curb. They’ll roll away and send you flying. But if you watch close, the nose only has to lift a tiny bit to clear the curb. Try doing it as a stall a little bit more before trying the slide. If you’re comfortable with it, it’ll become second nature and you won’t panic if you approach with speed.

The next thing that can go wrong is just not getting a good slide. There’s a little technique here, and a bit of spot selection. By spot selection, I mean your curb. If there are pieces missing from the curb, rough spots, or dry spots, those can really mess with you. It’s much easier to slide through things like that if you’re already sliding. Try to start the slide at the smoothest part you can find.

The other thing to keep in mind is that sliding requires commitment. Having speed and touching the nose to the curb doesn’t guarantee you’ll slide, even if the wax and everything is perfect. You have to commit and stiffen that leg. Put your weight into starting it going. It often feels like there’s a barrier that you have to break through. Once you do, you can slide until you’re out of speed.

You can always go faster and slide further, but let’s talk about getting higher. If you want to noseslide something higher, the technique is actually quite a bit different.

Start by moving your front foot back, off the nose, and cover the middle two bolts. I also angle this foot just a little bit. The angle helps the rotation and lets you land in the slide without your shoulders turning all that much.

When you ollie, don’t ollie too high. If your nose clears the lip of the ledge but your wheels don’t, that’s perfectly fine, and it’ll even help. If you clear it all the way, you can end up in trouble.

Pop the board, and aim your foot for the ledge. Don’t worry about staying with the board where it pops. Aim your foot and your body, and push the board to go with you.

With the ones I recorded, I did it in an incredibly lazy way. I rotate almost none, and let the board smack against the ledge and straighten itself out.

Once you get into the slide, it should be about the same. The landing will feel a little bit different. At this point, the pivot will likely happen in the air instead of on the ground next to the curb. But it’ll feel very similar to the lower version.

If you have problems, try it as a stall for practice, like you did with the lower version.

Try a shove it out too. It’s not as hard as you might think. Just pivot the board to fakie and jump back to regular at the same time.

Work on consistency instead of constantly pushing. I have the tendency to land a trick once and move on to the next thing. That’s not a good strategy, especially for foundational tricks like these. You aren’t just learning kickflips and pop shove its. You’re learning about board feel. You’re learning about confidence and commitment to tricks. Instead of moving right past beginner tricks to work on harder ones, it makes sense to drill these in a bit stronger. Learning harder tricks in the future will be easier with that stronger foundation.

Next time, we’re combining the pop shove it and the kickflip into the varial kickflip. It might be the toughest trick in the course! But it’s going to feel great when you can roll away from it!