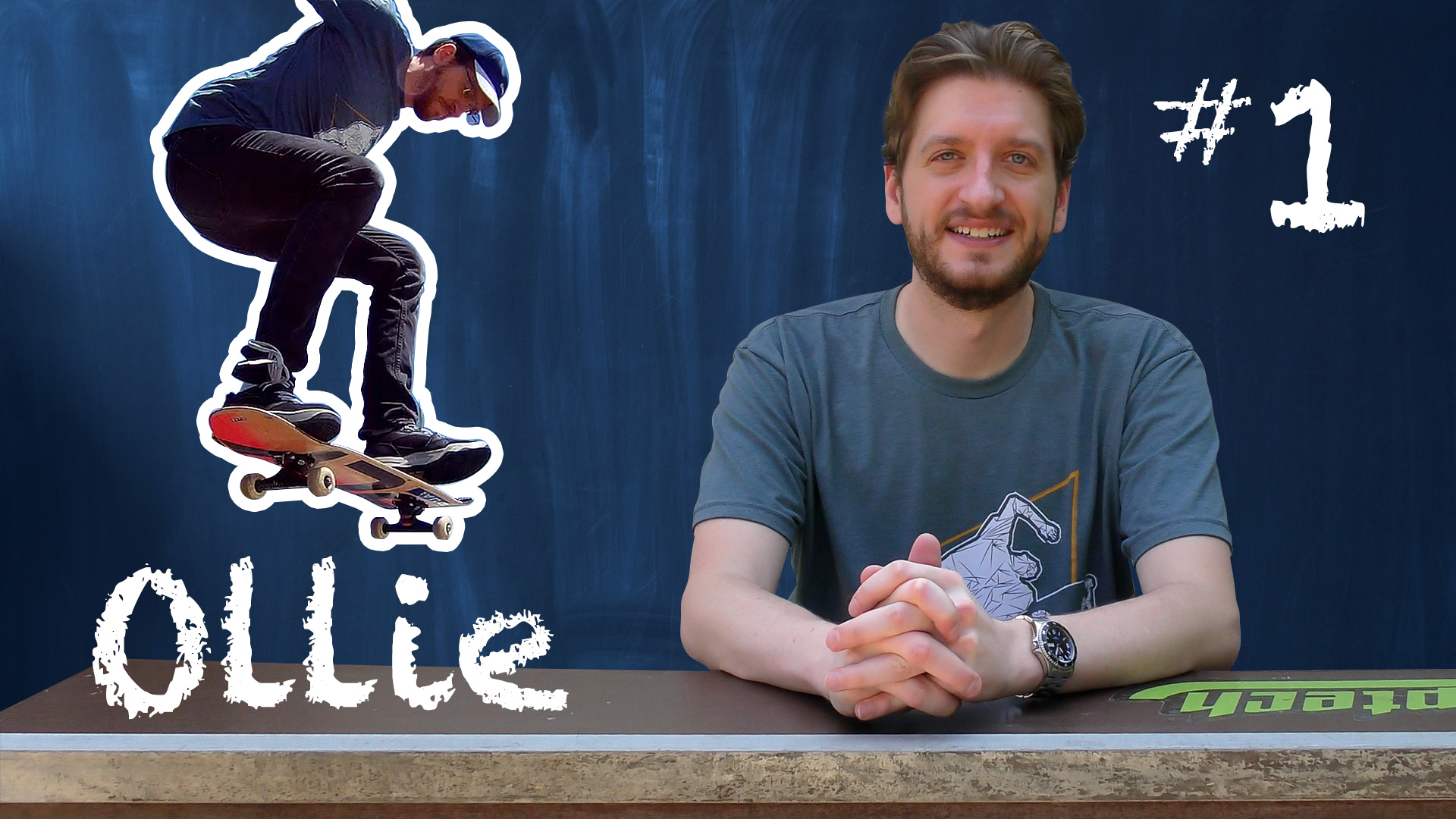 Welcome back to Shred School 101! This time, we’re going to tackle the ollie. It’s going to be tough, but it’s worth it. Let’s do it!

The Ollie is the most foundational trick in modern skateboarding. The trick was brought to flatground from ramps in 1982, and is responsible for skateboarding’s popularity.

So what does it take to learn?

All you really need to know to start trying ollies is which stance you are. Basically everything else is optional. It would be nice to be able to roll around and push comfortably, but it isn’t technically required. With that said, I’m going to recommend learning this one stationary. We’ll revisit that with the next couple tricks, but I think you’ll be learning physics and technique first.

At its core, an ollie is bouncing the board off the ground at the exact time that you jump. If that sounds complicated and difficult, that’s because it is.We’ll talk about control and how to get extra height later, but let’s figure out the basics first.

To start, try standing next to your board and seeing if you can pop it up into the air. ‘Pop’ is a skateboarding term for the nose or the tail snapping against the ground. If you stomp down on the board, it’ll get in the air, as long as your foot doesn’t stay in the way. But it also flips all over the place. But this is the raw energy version of what we’re going to do here. We have to tame this and figure out a way to control it to get up in the air.

To start a real ollie attempt, set your feet up like this, with your back foot on the very tip of the tail, about as far back as you can comfortably put it. Have your weight on the ball of your foot and your foot flexed and ready to snap down. Your front foot should be about in the middle of the board. As you work on the trick, this foot position will change. This position isn’t very stable and it can get a little wobbly. That’s one of the reasons we’re doing this stationary at first. But feel free to play around with it if you’re more comfortable a different way.

An ollie is mostly a jump. That’s the most important part of. When I first started skating, I was sure that slamming the tail against the ground hard enough was going to somehow propel me into the air. No. It’s a jump first and foremost, and there’s some technique to bring your board with you.

Start to jump, and as you get light on your board, try snapping the tail against the ground. The tail has to hit the ground hard enough that it’ll bounce a bit. Your first ollie isn’t going to set any world records in height, but as long as you clear the ground and get an inch in the air, you’ve done it and it’s just a matter of improving it.

One of the most common problems is that you slam the tail down… and it just dies. This is probably a timing issue. If you pop the board a little bit later, your body weight will be out of the way for the board to be able to get up off the ground. Even on your absolute worst attempt, your feet should be getting up in the air. Don’t go too crazy with it. You should only be getting a few inches off the ground for now. But you should be up in the air every single time.

What if you’re losing balance? With the extreme foot position we’re starting with, balance is going to be a problem, at least for a little while. If you’re too far back, the board might just shoot out as you start the trick. Or you might ollie and shoot out as you land. So what do you do?

There are a few options. When I learned the trick, I was halfway on the sidewalk, and I was holding onto a handrail. There’s nothing wrong with doing whatever you’ve got to do to not lose your balance. But you’ve got to wean yourself off pretty quickly. If you rely on that kind of stuff too much, you might start to build up bad habits that are hard to break later.

There’s a couple things you can do. First, you can try the trick in the grass, or on a carpet. You get less pop that way, so the technique is a little harder to get a hold of. But the balance will be easier and safer. Plus, if you bail, the worst thing that’ll happen is that you’ll fall on some grass.

A middle ground would be a product like SkaterTrainers. These came out after I learned how to ollie, so I never used them, but they go over your wheels to stop them from being able to roll, while still being able to be on concrete for the sake of getting the pop. I’d save getting these for if you’re really having trouble though.

So you’re going to work on your timing, work on your balance, and your first ollie might look like this. You get up in the air, and the board rocks back and then comes back down. It ain’t pretty yet, but we’ll work on height and style next.

So far, your front foot has done basically nothing except stop the board from doing a backflip and keeping it under you. But to get more height, you’re going to have to start controlling it a little better.

At this point, your front foot is going to have to move up the board a little bit. Maybe about a third of the way from the nose, covering the board all the way.

Hopefully by now, you’ve got some muscle memory built up for the popping motion, and you’ll have some brain space left to focus on what your front foot is doing. This is a good thing to keep in mind as you learn skateboarding in general. As you get one part of a trick down, you can keep it running automatically while you work on fine tuning other parts of the trick.

So you pop the board, and your front foot should slide up to the nose. Bend your knee and pull your foot up, and it’ll naturally slide up the board. This helps pull it up in the air. A split second later, start pulling your back foot up. The board will start to pivot on your front foot and level out. It feels kind of similar to jumping a hurdle, like you’re jumping off of one foot, then pulling it up to catch up with the other one.

Get a fingerboard. Just your regular run-of-the-mill Tech Deck from Target is fine. Fingerboards work just like skateboards. The physics of doing ollies and kickflips is just like skateboarding, other than the fact that your fingers are relatively stronger than your legs are, and you can’t lose your balance. But you can still get a feel for how a board moves, and it keeps your mind on skateboarding when you’re back in the house.

You’ll be working on your ollies forever. They can always get faster, higher, and more stylish. But at first, I’d like to see you focusing on getting them down with less and less aid, and eventually rolling. The quicker you get them rolling, the better off you’ll be with the rest of the tricks we’ll be learning. When you get the ollie, make sure you show me by posting on Instagram with the hashtag #ShredSchool101. At the end of this, I’ll pick a winner to get this prize from Quasi!

Next week on the Shred School, we’re going to tackle the shove it. It’s a bit easier to learn than the ollie, so if you had a tough time this week, hang in there. You might have an easier time next week. If you’re watching this in the future, it’s available right here. If you’re watching live, I’ll see you next week!