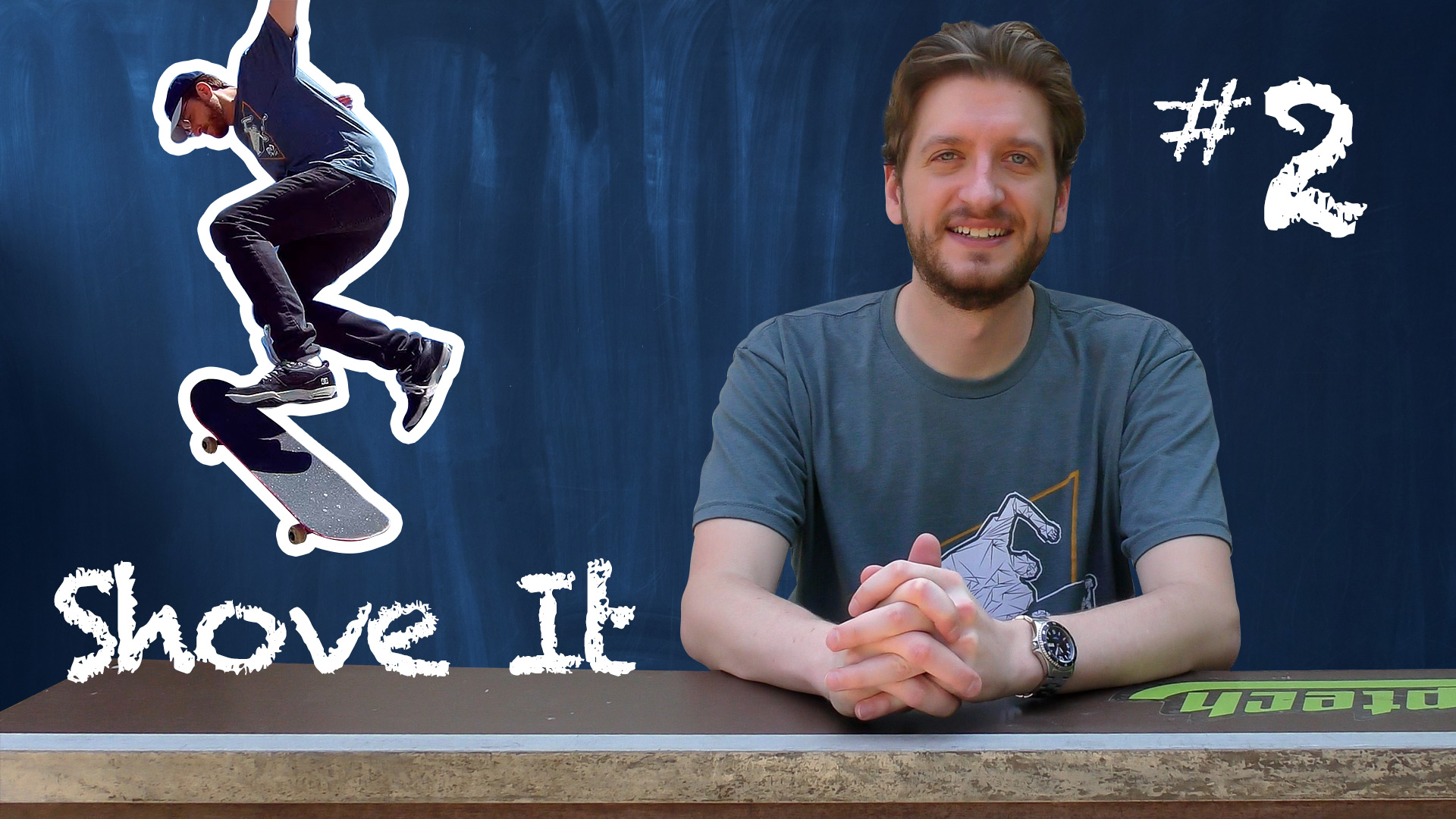 Welcome back to Shred School 101! Trick two is going to be the shove it and pop shove it, which are technically a little bit different. This is going to be the first time the board does something without you and you land back on it. But it won’t be that bad because you’ll see griptape the whole time. It’s good practice for the flip tricks you’ll do later, as far as learning commitment to tricks. That’s one of the toughest things to learn. You could have your technique down perfectly and still not land a trick if you can’t commit to it. Let’s work on that today.

Technically, you don’t need to know anything to start with this trick. You could learn it before the ollie, but I don’t think that you should. Being comfortable jumping and landing back on your board already will make this a lot easier.

We’re going to be learning two different tricks today, sort of. We’ll start with the shove it and add in a pop later to make it a pop shove it. The technique is very similar and it’ll be a natural way to advance the trick once we get there. But let’s start off right.

For your foot position, keep your front foot nice and pointy, a bit before the bolts. It doesn’t do anything for this trick other than getting out of the way, and having your foot angled lets you use your ankle to pull your foot up a bit quicker. You can play around with this if you want.Having it more over the bolts can help with balance and stability.

Your back foot goes here, on the toe side of the tail, angled slightly forward. You don’t want to be on the tip of the tail, since the board might flip a little bit. Play around with this until you find a comfortable spot.

To start off with, I would recommend trying this trick stationary. We’ll have to modify the trick a bit to get it rolling, and it’ll be easier to get comfortable with the trick before you try that.

Put simply, what you’re doing is starting the board pivoting, jumping, and giving it an extra push on the way to get it spinning a bit faster. Most likely, the board is going to fly ahead of you a little, and you’ll have to jump after it to land on it. At this point, that’s okay. Getting comfortable with the spin and the commitment is the important part.

The good thing about this trick is how you can land it no matter how much you do. If you only spin the board half way, you can spin your body the other way and still land it. If you spin too much, you can land that too.

Once you get this one fairly often, you can start doing it rolling… either way. It might be easier to do this one fakie at first. Even if you’re not as comfortable rolling backward yet, the transfer of the trick travels in the same direction you’re rolling, so it might be an easier thing to learn from scratch. If you do the trick kind of slow and more of a pivot than a pop, that will still work.

Doing it rolling forward can be a bit tricky at first. If the board is pivoting, how can you get it to stay with you and go straight? You need to do it quicker, snappier and more light footed. So, as you start to jump, wait a bit longer before doing the trick. Your weight should be 90% of the way off the board before you start to scoop it. If you do it quickly enough, the wheels will slide along the ground and stay with you better. You can practice this technique stationary too, if you need to. It’s okay if you travel forward a little bit in the air, as long as you aren’t going too far sideways.

There are a few things that can go wrong with this one. First, you might not be getting enough spin. Chances are, it’s not a power issue. Spinning the board around 180 does not take that much effort. If you’re not getting it, it’s probably technique. Keep an eye on your front foot and the pop. Is your front foot getting up out of the way? Is the nose getting up in the air? The board isn’t going to spin anywhere if all 4 wheels are on the ground when you start the trick. Try pushing down on the tail more as you scoop it around. Also, the type of ground you’re skating on will make a difference. Getting the full spin is tough in grass, but easier on polished skatepark concrete.

What if you’re having trouble with the landing? Landing heavily on one side of the board can make it flip over and you can twist your ankle or slam with that. Most likely, it’s a commitment issue. It can be more comfortable to land with only part of your foot on the board and part on the ground, because you won’t slip out with your foot braking against the ground. But you need to commit. You don’t have the luxury of doing the trick and deciding in the air whether it looks like you’ll be able to land it. You just have to commit to landing and hope that the board will be there when you come down. Eventually, you’ll get good enough at the trick that you can tell by touch whether you’ll be able to land it or not. But you can’t get there without risking it a little at first.

Another tip is to not plant your feet. If you’re landing with only one foot, there’s a decent chance that this is what you’re doing. Since your front foot just has to get out of the way, you might be putting it on the ground. Film yourself trying the trick a couple times and see if both feet are in the air the whole time. If not, jump higher, pull your feet up, and wait out the trick in the air.

The next step with this trick, once you’ve got the hang of it, is to mix in an ollie and turn it into a pop shove it. The difference between the two is whether the tail touches the ground. You can do a shove it without a pop at all, which is what makes it a nice beginner trick. But adding in that pop can give you some height, which is helpful down the line for adding in flips or doing it into a grind.

As you start to scoop the tail around for the trick, snap it down and hit that tail against the ground. As it spins, the board will get a bit more vertical. Unlike an ollie, you don’t have to level it out. As the pop and the spin mix with each other, they’ll cancel out and the board will end up flat after the 180 spin. The cool thing about this is that you can work your way up. Do a tiny pop, then add a little more and a little more as you build confidence with the trick.

Don’t get married to your board stats yet. The width, wheel size and hardness, and your truck brand and height are all preferences. If they’re pro level brands, then they’ll work fine. Even as you get better and better in skateboarding, your preferences can change. Don’t be afraid to try something new. Try a softer wheel if the ground you skate on is rough. Try a wider board, or a more narrow one. Try a strange shape. Try a vert board, or a freestyle board. You might like it.

Try doing shove its with the board backward. Later, when you’re working on lines, you’ll often do a shove it to get the board turned back around the right way.

Next time, we’re going to learn ollie 180s and half cabs. It’ll give us a bit more practice with our ollies and build a bit more confidence doing rolling tricks. Once we’ve got those down, we’ll be ready for kickflips! See you next week. Or now, if you’re watching this later!