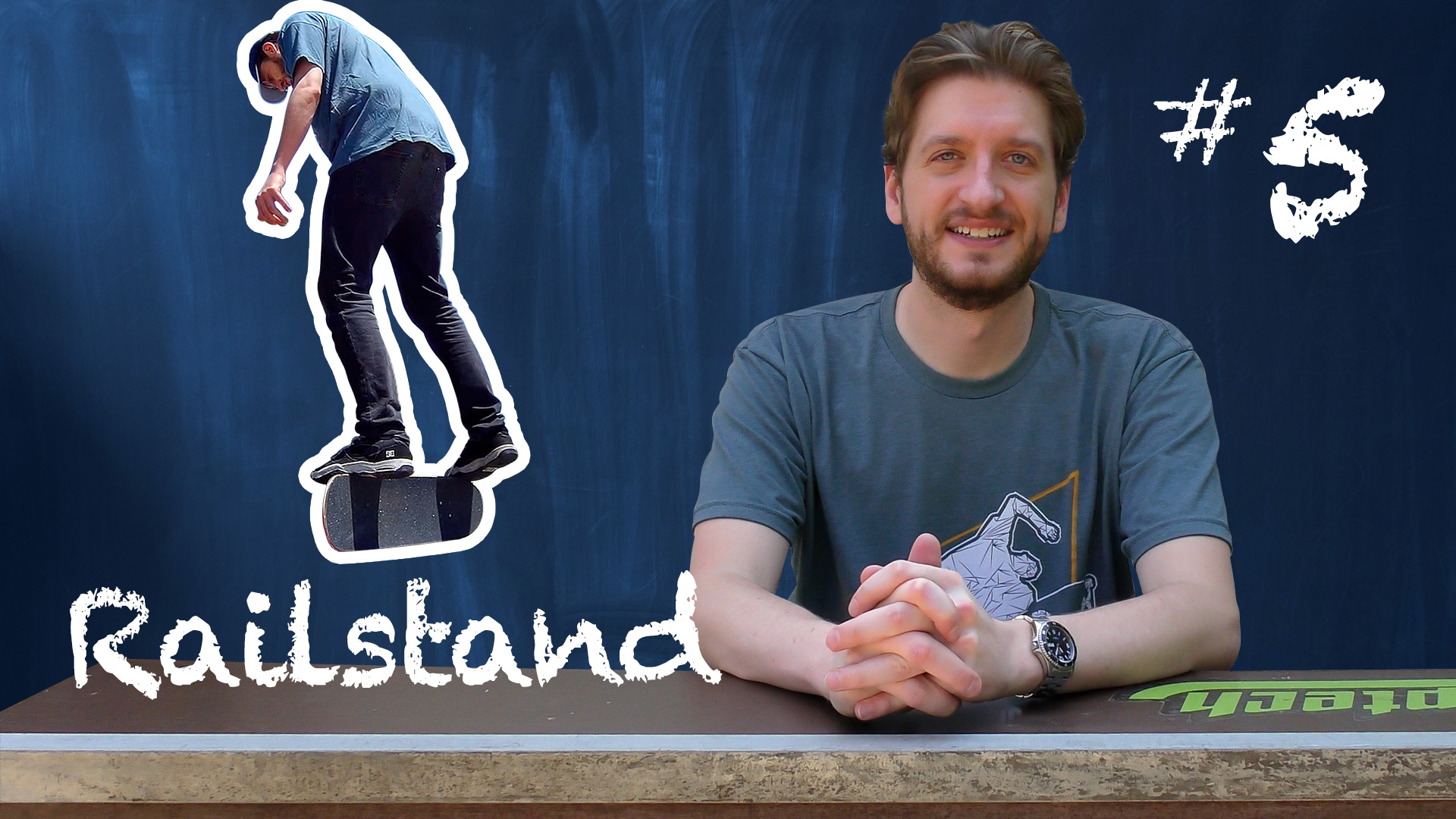 This time on the Shred School, we’re going to be learning a freestyle trick, the railstand! There are a few styles and techniques for this one, and no doubt you’ll find one that works for you. We’re taking a mini break between the last trick and the next one, but that doesn’t mean this is going to be a walk in the park.

You don’t need to know anything else to try this trick. Technically, this could be the first thing you ever learn on a skateboard. But it requires a bit of balance, so I wouldn’t recommend doing it too early. It also doesn’t directly lead into any other tricks in the course. So why learn it?

Adding a railstand into your trick repertoire will help with your balance and your board control. Plus, it’s one of my favorite tricks, so you might just have a good time doing it, and there’s nothing wrong with doing something strictly because it’s fun.

There are two main variations of this trick, toeside rail and heelside rail. The edge of your board used to be called the ‘rail’ back in the day, but you don’t hear that very much anymore. So you can stand on the rail by your toes or by your heels.

The toeside direction is more simple, and most people will probably learn that first. But it’s less consistent and it can be a little scary when you first try it.

Heelside has a lot more technique, but it’s easier once you get used to it. And a bit more comfortable, since the board will never leave your feet.

Let’s start with toeside though. Start with your feet over the bolts, with your toes on the edge, or hanging off a little bit. The goal will be to tip the board over onto its edge, jump, and land on the wheels. So having your feet in the right positions to start can be helpful.

You can use both feet evenly, or split it up a little. In my case, I use my back foot a lot more than my front one. It feels more consistent to me to train one foot to do most of the work, but that’s just a personal preference. Get the board starting to tip, and then give it a push forward as you hop up. Don’t jump too high. You want to be ready to catch the board on the side as soon as it flips over. Land carefully on the wheels and you’re in good shape. To land it, you can either just push it back the way it came, or you can move your back foot to the tail, pop and push it forward a bit for a ¾ flip to get back to the grip.

For heelside, there are two main variations. The first one is similar to how we got into toeside rail, but we can’t really pop our heels down. Instead, set your front foot almost sideways, by the front bolts. Your back toe should hang off by the back bolts. The work is going to come from both feet.

Start to push down with your front foot to get the board tipping over. Hop, and pull your back foot up, hooking the board to pull it up with you. With their powers combined, it shouldn’t take all that much effort to get the board where you want it to go. The balance can be tough since it’s an awkward foot position, but once you get used to it, you’ll realize it’s a bit easier.

There’s a second version of the heelside rail, called the tail to rail. Start with your tail on the ground, and both feet parallel to each other on the tail. Move your back foot up by the wheel, and hook it over. Your front foot will work as a pivot point for a second as the board gets into position, and then you can put it on the front wheel. It’s the way I do railstands 90% of the time I do them. It’s quick and easy, and it starts you completely stationary, so you aren’t compensating for any rolling or shifting that happened on the way up.

Landing is the same as toeside. Either tip it back, or put your back foot on the tail and pop it down for the ¾ flip.

If you’re having trouble with this, it’s most likely gear or fear.

When I say ‘gear’, I mostly mean the tightness of your trucks. If they’re very loose, then getting into toeside rail can be a bit tougher. If the board just turns when you try to pop it up, that’s most likely what’s going on. My trucks are pretty loose, so it’s possible, but you can either tighten them up a bit or just focus on heelside. Heelside works just fine with loose trucks. In fact, it kind of helps. The more tipped the board is the less of a step it is to get onto it.

But fear is most likely going to be the bigger problem. I haven’t done this trick in a long time before filming this because of all of my injuries. And the toeside railstand was actually pretty tough to get back, because there’s no half step. You can’t safely land with one foot. You either do it or you don’t. If it’s freaking you out, try doing it while holding onto a railing or a ledge. That’s your best bet to get over it.

The biggest thing you can do to advance is to learn railflips. These are done in all kinds of ways, but I’m talking about the standard varial 1.75 flip out of heelside rail. You know what’s cool about railflips? Something like that would be crazy if you popped it like an ollie, but out of rail, it’s not that big of a deal. And you already know how to do it. It’s the exact same motion as a pop shove it. Put your foot on the tail and do a pop shove it. Done.

But this requires your board to be set up right, and it’s probably not. This trick isn’t even possible on this setup. Your deck needs to be wider than the axle so you can build up some pressure before it tips over. Then, when it does, all that pressure explodes and the board flips really hard. It’s a fun trick, and it looks impressive. But if your board isn’t set up for it, don’t worry about too much. You can skip this now.

Try everything once. We’re mostly learning street tricks in this course, but I’ve put two freestyle tricks in here too to help expand your boundaries. And it gives you cool combo options in the future too. But try doing tricks on transition too. The only reason I’m not teaching dropping in and rock to fakies is because I want the course to be accessible, and I don’t know if you’ll have access to a skatepark or ramp somewhere. But if you do, skate some ramps too. Try old school stuff like bonelesses and no complies. Even if you don’t think you’ll like it, you might! Or you might be so good at it that it’s hard to pass up.

Try doing a line. In skateboarding, a ‘line’ is a few tricks in a row. It doesn’t have to be your hardest ones. At first, maybe it’s an ollie and then a shove it. But whatever it is for you, try to do one this week.

Next, we’ll be working on the frontside shove it. It’s a bit tougher than the backside version, and it’ll help set you up for the heelflip after that! I’ll see you next week.