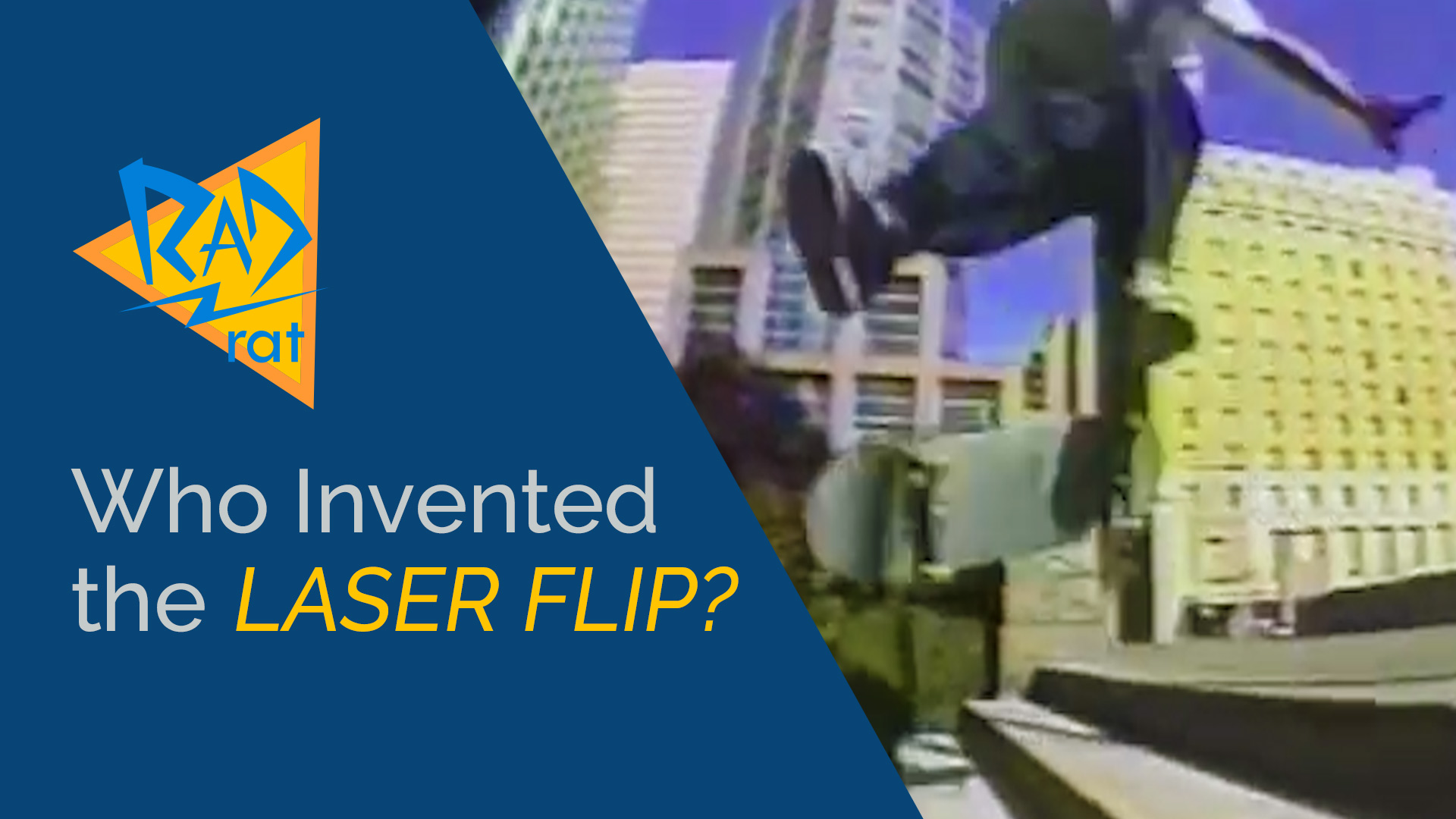 Before we get too far into this, I just want to define the trick and get everyone on the same page. A laser flip is a frontside 360 varial heelflip, or the opposite of a normal tre flip – frontside and heelflipped. The name is actually kind of interesting. It seems to come from this Mike Hayes video part. See if you can pick out why.

So in the original music track, there are some laser sound effects, and that seems to be the reason it’s called a laser flip. And, here’s the thing. A lot of people think the trick is spelled with a Z, but it’s named after an ACTUAL laser, which is an acronym with an S in it. So there’s really no reason it should be spelled any other way. Anyway, back to Mike Hayes. A lot of people think this was actually the first one ever done, but it’s really not even close.

Let’s take a step back and figure out where this trick came from. Mullen invented the heelflip in 82, and the varial heel in 88. I don’t have footage of either of these, but I don’t doubt they happened. Around 88 and 89, the trick made the jump into street, and you start seeing a few variations pop up – like a body varial, half cab both ways, and to grabs.

Varials start to pop up in videos too, mostly by Rick Howard. He’s a big name in heelflip history. You might be familiar with the name “Rick flip”, which is another way to say fakie bigspin heel. I don’t know for sure if he invented them or not, but he clearly made them famous. If there’s any question it was him, Daewon actually slips up and calls it a Howard flip as well. He might have been the first guy to make his board do a laser flip motion, it’s just that he follows it a little.

Other people were doing varial heel stuff too. Rob Dyrdek actually does a nollie one as his ender in the Tracker video in 91. Mark Wyndham has them locked that year too.

Chad Conner and Chris Hall were also doing frontside 360 shove its in 91 as well. So at this point, we have all of the ingredients for the laser flip, and it’s a race to see who gets to it first. Let’s knock out a couple of the obvious contenders.

Was it Rodney Mullen? If you asked me in the comments a couple months ago, that’s probably what I told you. And here’s why. Back in Questionable from 92, Mullen does a laser flip. It’s funny though, he also does a front shove late varial double heel, and that’s cut in like it’s no big deal. The laser flip seems like it’s edited as if it’s a bigger deal. I don’t know. But it’s Mullen, so it makes sense that this was the first one ever, but it wasn’t.

Also in Questionable is the other obvious choice, Rick Howard. He throws this laser flip in his part too, in 92.

But in fact, this time, we have a surprise contender – Pat Brennan. This dude kills it. He’s got font foot impossibles, frontside bigspins, which are still relatively new at the time. Kickflip late shove… And then he lets us have it – boom laser flip. Yeah, it’s over a hip, so it’s a little underrotated, but guess what? He’s got you covered. Laser down stairs too.

A few years later in 94, Marc Johnson was throwing them in the Maple video. They kind of died out for a bit, but now they’re back strong again.