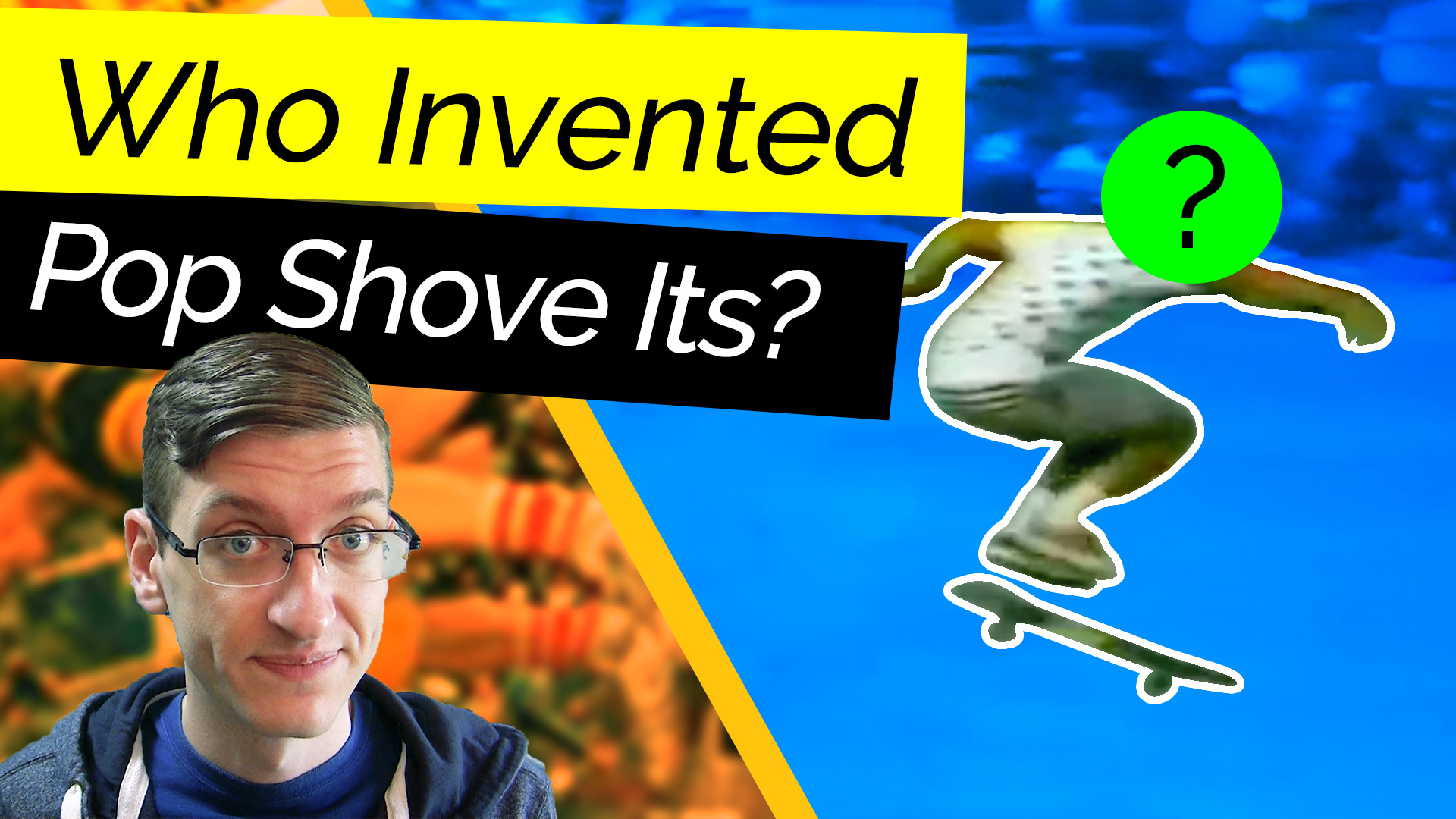 When you go back to something as simple as the shove it, it’s hard to think about it having an inventor. Like, who invented the kickturn? Who’s the first person to do a flatground manual on a skateboard? We just don’t know, and it doesn’t really matter because someone else would have invented it a couple days later anyway.

But the shove it actually does have an inventor – specifically off the tail. That’s what we think of when we hear ‘shove it’ these days, but the original was actually off of the nose. You might think of that like a nollie backside now, but it’s not popped. It was a little easier because you could use both feet. Twist your front ankle, and push it around with your back foot. This way stayed popular up into the 80s, up to 540s and even 720s. Gazelles were originally done that way too. But that plain nose shove it doesn’t have an inventor. If you dig deep enough, you might find someone willing to take credit for it, but I bet some kid in the 50s probably did one without documentation.

But if you think about a pop shove it off the tail, that one is a little less of an obvious thing to do on a skateboard, and it is possible to track it down to one person. It’s just not exactly clear who that person is. Our first candidate is Ty Page.

If you aren’t familiar with Ty Page, AKA Mr. Incredible, he was one of the top skaters in the world throughout the 70s. He was well-known in freestyle, high jump events, slalom and pool events. He was on the cover of skateboard magazines regularly. He invented a lot of stuff, like the Ty Slide, and even the Daffy. A lot of people thought this was invented in the video Yeah Right, and they call it the Yeah Right manual. But no, it predates that by 35 years or so. Ty’s website says that he’s credited with inventing over 50 tricks. A lot of this stuff is handstand stuff, and headstands, headspins, that kind of stuff. Before Steve Rocco and Rodney Mullen came out, this is what freestyle was like, and Mr. Incredible did a lot to push it forward.

He skated with such speed and complexity in his footwork that Skateboarder magazine had to buy a new $3000 high speed camera to photograph him. He’s also the first guy to skate and actually push switch.

Did he also invent the pop shove it? Well… that’s kind of hard to decide, and I’ll let you have the final word on whether this counts or not.

One of the tricks Ty invented is the Ty Hop. His website specifically defines it as a pop shove it. But that’s not 100% right. Here’s what the trick looks like.

Let’s break down exactly what this is. The footwork move he’s doing here is called a spacewalk. You basically swing a wheelie back and forth. So Ty uses that to build some momentum, then lets go of the board and lets it spin around. He’ll land stationary at pretty much any angle. You could think of this as a 360 pop shove it…. But it’s not really.

Here’s the thing. The tail doesn’t really pop, and he doesn’t actually roll away forward.

There’s an article about the Ty Hop and pop shove its in Transworld, and they talked to Steve Rocco and Rodney Mullen about it. Rocco grew up in the same town as Page, and he watched him do the Ty Hop in person. Rocco has this to say about the trick:

“As you rightly recall the Ty Hop was usually done with space walks. And then at the end when you were almost stationary. There are only a few people I ever saw do a spacewalk to Ty Hop to spacewalk successfully and you and I [He’s talking to Mullen] are probably the only ones to do it cleanly. The reason I bring this up is it that I always considered a shove it as a trick that was done at speed whose main point was to turn to the board back to nose first without a line-ruining kickturn.

While Ty could do a Ty Hop and land it I do not consider it a shove it because he wasn’t rolling forward. As you recall there were frontside 180 shove its and then 360 shove its and then 540 shove its of which you and I were the only ones that could do them with any real speed—all a totally different move than a Ty Hop.”

So, spoiler alert – the second candidate for inventing the pop shove it is Steve Rocco himself, so take some of his criticism with a grain of salt, but he does make some good points. But the Transworld author ran this past Mullen and said he agreed with his points. Using modern street terms for freestyle footwork doesn’t always work. Let’s look at a walk the dog. This is a super old move where you do a fakie pivot, then step back to the tail, do another fakie pivot, and keep going. You can imagine if you did that really fast, you might start to step back to the tail before you’re done pivoting, and actually get in the air a little. Like a fakie shove it. But is a really fast walk the dog the same thing as a fakie shove it? No, it’s not.

So the Ty Hop was just a way to land the spacewalk, and it was similar to a shove it. But he never just rolled forward, did a shove it, and kept rolling. Rocco says he and Mullen were the first to Ty Hop back into a spacewalk and keep going.

But he also talks about how he invented the trick way back in 1979. Here’s his story.

“The first pop shove its were done (frontside) by Alan Gelfand and myself in Venezuela in July 1979 over a 3” or 4” pipe laying on the ground. I believe it was an attempt to stop us from skating across the arena floor. Alan and I took it as a personal challenge and decided to see if we could go right over it without losing speed and therefore reinforcing the old adage the necessity is the mother of invention. Alan was already hitting his tail and getting his board to “pop” without question. But since I had a freestyle board and he had either a (Powell Peralta) Beamer or a Ray Bones Rodriquez model (Ed note: original width for both was about 10”) I was able to pop it a bit higher and make it over first. The first pop shove its were frontside. Backside was a while later. I’m not sure if I did those first.”

So that’s the story. 1979, before flatground ollies even. The Transworld article does a lot of research to back up the claim by asking Gelfand, and tracking down information about the event and everything, and it all checked out.

So Rocco invented the frontside pop shove it for sure, but the backside one is still kind of a mystery. Does the Ty Hop count? In my opinion, it doesn’t. Nobody else seems to be taking credit for the backside pop shove it, and it’s possible Rocco was actually first on that one too.

Let me know what you think below, and let me know if you know anything I don’t.