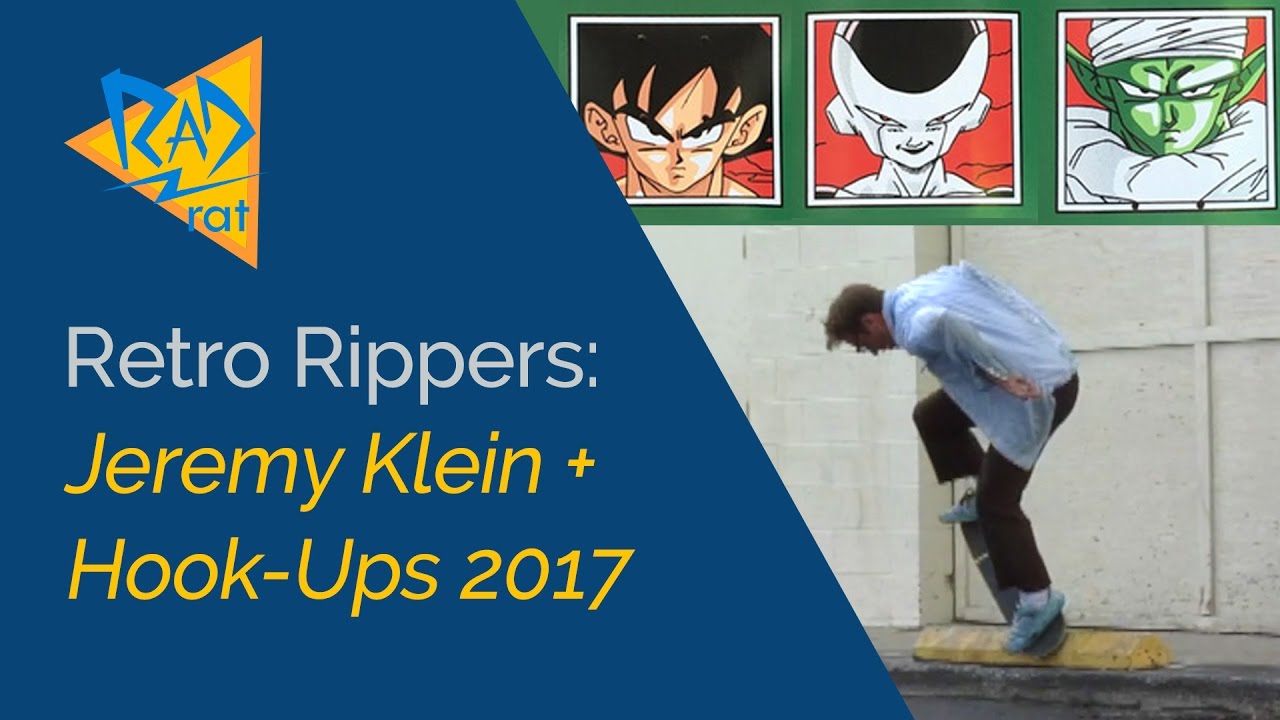 Welcome to my new series Retro Rippers where I let you know what’s going on with your skate idols from years ago. Aside from this, I also do game reviews, trick histories, trick tips on the shred school, and I answer your questions on AskRadRat. Subscribe so you can learn more about skating and skateboard history every Monday Wednesday and Friday.

Today, we’re talking about Jeremy Klein. He was a huge name in skateboarding throughout the whole 90s, and a little bit into the 2000s, and he launched Hook-Ups, which I was shocked to discover is still running today. I’ll talk about that in a second but first let’s talk about Jeremy and how he blew up.

Klein was on flow for Powell for a while, then moved to World Industries. This is some footage of him winning a street contest in 88. If you have a chance, watch this full video. The commentary is hilarious. When he quit World, he said Rocco kicked him off the team, even though he was already quitting. Like ‘You can’t quit! You’re fired!’

A little bit after this, World turned him pro in 1989. Nobody really knew who he was and his decks weren’t really flying off the shelf, until this video part came out.

Klein’s part in Rubbish Heap was legendary. He had a lot of fast, powerful tricks, and he also did some tech stuff, like this kickflip 5-0, and this super steep backside 360 flip. He also managed to 180 nosegrind and backside smith a handrail.

Maybe most famously, he also focused Rodney’s board, symbolically ending his freestyle career. Jeremy made the term ‘focus’ popular too, actually. Although he says he got the name from Spike Jones who told him he had to ‘focus’ on hitting the ground under the deck.

One thing Klein is known for is avoiding the trends. He never really got into pressure flips or late flips or anything like that. When he was asked why, he simply said that he hated them. He stuck to what he liked doing, and it ended up being the direction skateboarding later went in. So his early footage still really holds up.

Birdhouse, at the time, made some of the craziest videos. Look at this stuff from ‘The End’. So they went on these missions to grind all these store signs and gas stations and stuff like that. He said that the signs themselves don’t grind, so they had to go take measurements and make up a covering for it that would actually grind. Then they just went out and shot it without permission or anything. One time they thought they were going to be caught because a fire truck pulled up, but the fact that they had lights and generators made it look more legit, and people just assumed they were allowed to be there. They did all kinds of other crazy skits too.

Pretty soon, Klein started Hook-Ups. I wasn’t able to get a firm date on when this happened exactly, because it was kind of a soft launch. It started with only T-Shirts and slowly built up from there. But it was probably around 93, because they had a Hook-Ups video in 94.

Hook-Ups was kind of a child company of Birdhouse. He never left the team, really, this was a side project. Now when I first started skating in the early 2000s, everyone knew what Hook-Ups was. It was in all the mail order catalogs and stuff, and was known for all the weird anime art that they had. It was always girls in bikinis or less. I never knew anyone who owned one… Even if you were into that kind of stuff, you don’t necessarily want it on a board, but they were actually huge back in the day. Jeremy talks about the art style, and he simply said that he liked anime and there wasn’t enough of it around. He got his first computer, got Birdhouse’s approval, and just started making stuff.

So like I said, they started of with T Shirts and stickers. By 94 they had a team, and decks. In 95, it was really starting to take off and they actually made shoes. You might have known about this because a couple of years ago in 2015, Etnies re-released their shoe. The original didn’t last very long though. Jeremy says that one order of shoes would cost a million dollars. And they were doing well because there wasn’t a lot of competition for a while, but as more skate shoes started to come out, they bailed out of the shoe market because the risk was too high.

Hook-Ups was big from about 96 to 99, according to Klein, and then started to decline. They put out a video called “Destroying America” in 2001, which was pretty well received. It was a crazy video where they run over trees in a van and do all kinds of weird stuff. It was more a tour video that focused on the tour stuff rather than the skating. But it has Gonz and Tony Hawk in it, so that’s something.

This whole time, he was still on Birdhouse though. But that relationship ended in 2008. Klein says, “What made me retire my board was because Birdhouse made me. I would’ve liked to have kept it going. I love skating and I love having a board out with cool graphics on it. But Birdhouse was being sold at the time and there were some weird things going on over there. I just stopped working for them which is pretty much why that all happened.”

In 2010, his old team mate Willy Santos made a guest board for him on his brand, Willy’s Workshop.

But what is he up to now? He still skates, and he actually runs two skateboard companies.

Surprisingly, the first one is Hook-Ups. I was blown away to find out that not only are they back, they actually have been in business this whole time. I’m surprised that there’s still a market for this stuff. In the 90s, anime graphics were fresh and interesting because nobody knew what it was. Now, anime stuff is really common, and I would think that it would be really nerdy or weird to have. It’s not an exotic or interesting thing anymore. Having anime bikini girls on your shirt would be less edgy and more like you’re a dude who’s in love with his pillow case. But still, they’re around, making shirts, sweaters, stickers, hats and graphics. I can’t really show half of the graphics they make, but check it out on your own if you want. They’re 60 to 65 bucks each these days, which makes sense considering it’s more of a small business now without bulk ordering and economies of scale. The sizes start at 8 and go up from there like a lot of boards these days.

The other brand he runs is called JK Industries. I think. The site is JeremyKlein.com, and the banner says ‘ku-ra-i-n’ in Japanese katakana, which is as close to ‘Klein’ as you can get. So it’s either Klein Industries or JK Industries. Anyway, he makes silk screened boards there, as opposed to the heat transfer stuff you’ll see in most places. The graphics are mostly anime and gaming, including a pokemon one and even a Dragonball z one. The prices are similar to Hook-Ups, or maybe a little higher. But you can get a lot of them signed too.

So that’s what Jeremy is up to these days. He’s still skating at 45 years old, and still involved in skateboarding.

Who do you want to see me cover next time? Before you comment, see if someone else nominated that name already, and like the comment. That way, the ones most people want will float to the top and I’ll be able to see them easily.

Also, let me know what you think about this new series in general. It’s still experimental but I’m hoping to do more in the future if you guys like it, so let me know.

Although – I will be away on vacation next week into the following week. Videos are all set and they’ll still go up at their regular time without me being involved, but it might take a while to get to comments and things like that. Also, I’ll be either MORE active on social media, or not at all. Depends on how the trip goes and if I have signal and stuff.

But if you’ll miss me too much, here are some more videos I made recently for you to check out. If you liked the video, hit the like button and don’t forget to subscribe so you can learn more about skateboarding 3 times a week. Skateboarding deserves to be documented.