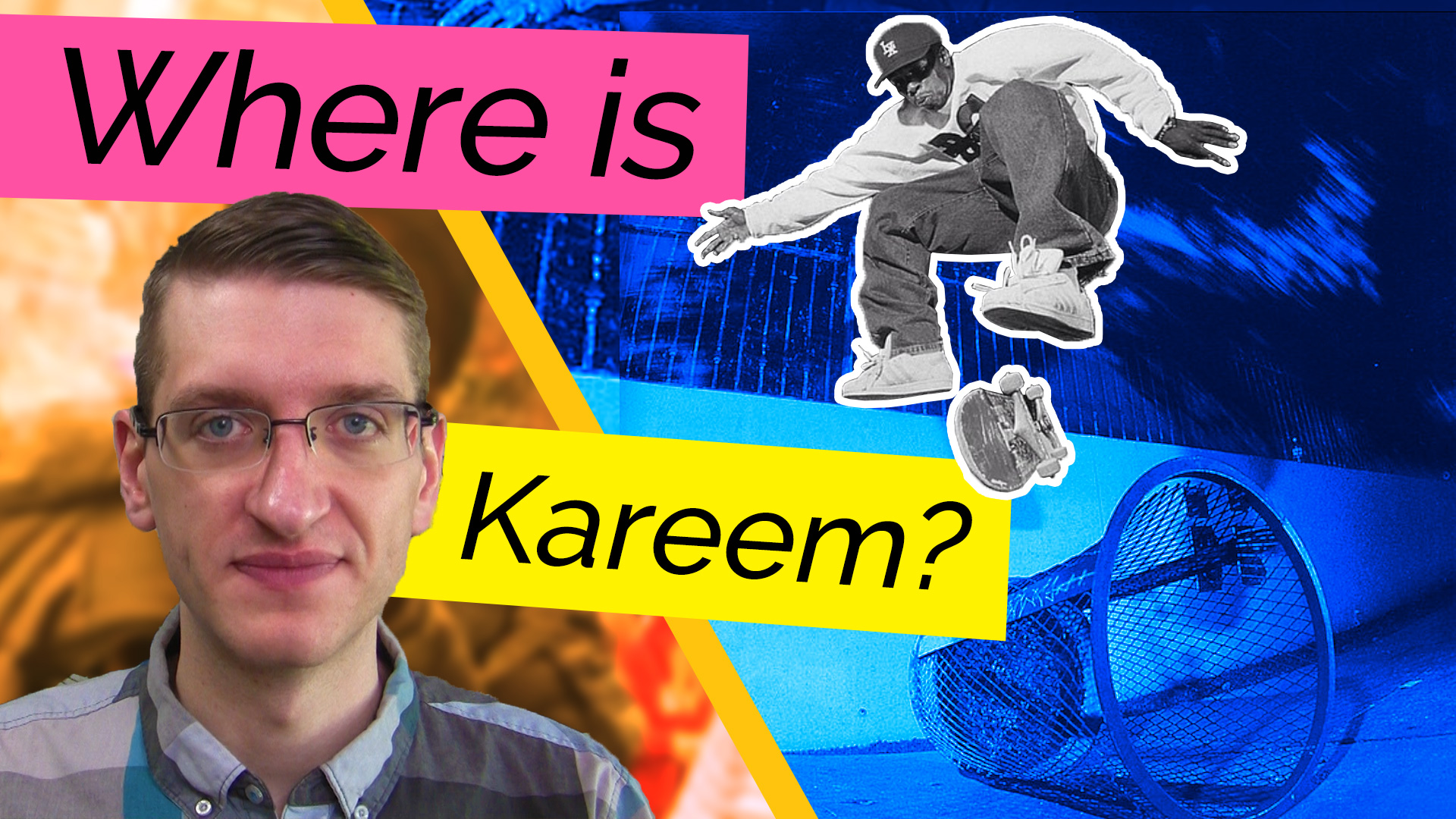 I’ve talked about Kareem Campbell a lot on this channel, but I haven’t really covered his skating directly. I’ve talked about the ghetto bird, and actually what it is. It’s NOT a hardflip late backside 180 – it’s more like a bigspin. You can see a video about that here. And I also made a video about how someone else actually did that trick first. I don’t think he actually STOLE the trick and tried to claim it as his own, but you can see the whole story about that here.

A lot of people have asked me to talk about where he is right now. And we’ll get there. But first let’s take a look at his career up until this point.

Reemo was born in Harlem, New York, but he actually moved to California when he was 6 and grew up around the Venice Beach area. He was skating pretty young and started to get some sponsors, like bridge bolts. Remember those? I talked about them in my worst gimmicks video.

Anyway, he started entering contests around this time, and he worked his way up through CASL and into NSA. So the way this used to work is that CASL was the amateur skateboarding competition league. If you worked your way up in that, you would graduate to being considered ‘pro’, regardless of whether you actually had a pro model deck or not. So Kareem was entering a lot of contests and starting to win them, and he went on tour with Rocco. When the NSA finals were coming up, Rocco told him not to worry about them and stick with him and he was going to go pro for World Industries right then.

His first real video part was in New World Order in 1993. He had a part in the A-1 Meats video from 91, from he had to film it all in one day, and there are only 2 spots in it. Can you imagine that these days? There’s a new Plan B video coming out, and they just film it on Friday and release the video Monday. Things were different back then.

But anyway, his New World Order part really put him on the map. At this point, the hot thing to do was use classic music or ironic oldies for your part. I’m not really sure why. Kareem comes out with a rap soundtrack, and he’s got a completely different look than what was popular at the time. Sure, there weren’t a ton of black skaters at the time, except for Shawn Sheffy, Ray Barbee, and some other guys, but it was his whole look. He wasn’t wearing giant purple pants or anything, he just looked more cool than all the goofy trend followers at the time.

And his skating spoke for itself too. It’s tough to go back and watch his early footage, because it doesn’t really hold up – but that’s because skating went in the direction he was skating – hard tricks done well. As opposed to insanely difficult late flips that you barely roll away from. People built on his style and he paved the way for a lot of the guys who came later.

And even from the beginning of his career, Reemo was ambitious. He started Menace Skateboards almost immediately. There’s a whole Epically Later’d series about that that you can check out for all the details, but it was pretty much the first of its kind – a brand focused on more on gangsta vibe. A lot of brands in skateboarding were either cartoony and silly, or they were punk with skulls and flames and stuff like that. This was the first one that was more hardcore and aggressive in that kind of way.

Menace never had their own pro video, although they filmed for one. It just never got done. But they did have a shared part in the World Industries video 20 Shot Sequence. There was also a part for Blind, 101 and some other World teams.

Interestingly, there’s a famous shot of Kareem doing a line and he actually checks his pager in the middle of it. It’s funny – he was asked about it, and he said his girlfriend has pregnant and due to give birth, so he was checking if it was her. But in Trilogy, 2 years later, he actually does it again. That would be a long pregnancy.

Menace ran until 98 when it had to change its name to All City Skateboards, then changed again to City Stars in 99. They had a full length video in 2001, but seemed to fade away within a couple years of that.

Later, Reemo brought City Stars back, but it doesn’t seem like it’s still going. The site is still up, but the social channels haven’t been touched in years and I can’t actually find their boards for sale online anywhere. With how many businesses and stuff Kareem has going, I wouldn’t be surprised if this made another comeback soon.

On top of Menace, He also started Axion shoes. This was pretty successful and was popular in the 90s for a while. He ran it until 2000, when he decided to take City Stars from Dwindle and be independent, but he had to leave Axion behind. It went on without him, but died pretty soon after. The name was bought in 2009, but it had nothing to do with Reemo. It seems like it died again. Now the name is being used by a Japanese weight loss pill or something.

Aside from all his brands, Reemo was also in the Tony Hawk series. And that’s how I was introduced to his skating. He says he actually lived really close to Neversoft, and would go in the office a lot to help out with the game. And it did a lot for him. He said his shoe royalties went up to $100,000 a month because he was a household name. And Activision itself paid him – once he got a check for $170,000. And that says a lot to me about how that was handled. I always assumed that they just paid them upfront to license their name and appearance and then that was it, but it seems like they were actually getting royalties. So I bet that check came when Pro Skater 2 was on every game system in the world – Playstation, Dreamcast, Xbox, N-Gage and everything. Of course, not only was he in the game as a skater, but he actually made some songs that were in the series too. In 2 and 3, he made his own theme songs for the ending videos, but they weren’t in the regular soundtrack. He also worked on a song that’s in Pro Skater 4.

But by the mid 2000s, his footage is basically done. He had some ads, a handful of guest tricks and appearances in other parts and stuff, but that was it. So when a ton of people were introduced to him in Pro Skater, he was almost done filming. I remember seeing the videos you unlock in the later Pro Skater games, and he’s not even skating in them – just signing autographs and throwing a couple simple tricks at a demo. I always wondered how this guy was actually a pro.

And if you look back on his career as a pro skater – it doesn’t seem like he did that much. He didn’t win a ton of contests, and he only had a few video parts. He really only had 2 – then he was in montages and stuff like that.

But you know what? He played it right. He used his skating as a way to build up businesses and make sure he could support himself and his family after he was done skating professionally. In an interview, he said that he loves money. And so, if he ever has free time, he’s using it to make more. And from that perspective, he’s a very successful pro skater.

So what is Kareem Campbell up to RIGHT NOW? That’s tough to say. If you read interviews with him, you’ll see a lot of 2 word answers. He doesn’t really like to give too much away, but he is apparently living in Texas for the most part, but he travels a lot.

For work, he’s apparently doing real estate and telecommunications. That could mean basically anything. He has a real estate license, so he’s actively involved and buying and selling properties, whether it’s to individuals or as investment properties, who knows. I tried to look up more information, and I just couldn’t find anything. But it’s hard to imagine this dude trying to negotiate a deal with a business buying a skyscraper while he’s wearing a hoodie and holding a giant bag of pot. So I just don’t know what he’s doing exactly. And telecommunications can be telemarketing up to owning a cell phone network. Part of it, at least, is doing Instagram promotions, like when xXx came out, he started posting about it left and right. But he’s also talked about doing production for television and graphic design too.

One thing you’ll see him do fairly often is promote is 4DWN. And they’re a non-profit organization in Dallas that’s all about helping kids develop and grow through skateboarding. It’s a free skatepark, but they also have community stuff and free classes and stuff like that. Sounds like it’s providing a safe environment for kids to hang out so they don’t get involved in other kinds of stuff. I don’t know Kareem’s involvement exactly, but he goes to their park sometimes at least, and they listed his name as a supporter. He’s always been about that kind of stuff. He’s talked before about skating being a way out of gang life and drugs and stuff. So that’s pretty cool.

Kareem also says that he’s skating about 4 times a week. This was a couple years ago, but either way, he’s still getting out there when he can. He says that no matter what stuff he gets into, skating is always his relief. Which I completely get. Like, this channel, I have to do it. I have to watch skate videos and go out and skate when my knee is healthy enough – no matter what else I have going on.

So it sounds like he’s doing really good, and he’s even teased making another video part at some point. That was a few years ago though, so we’ll see if that ever happens. I hope so.