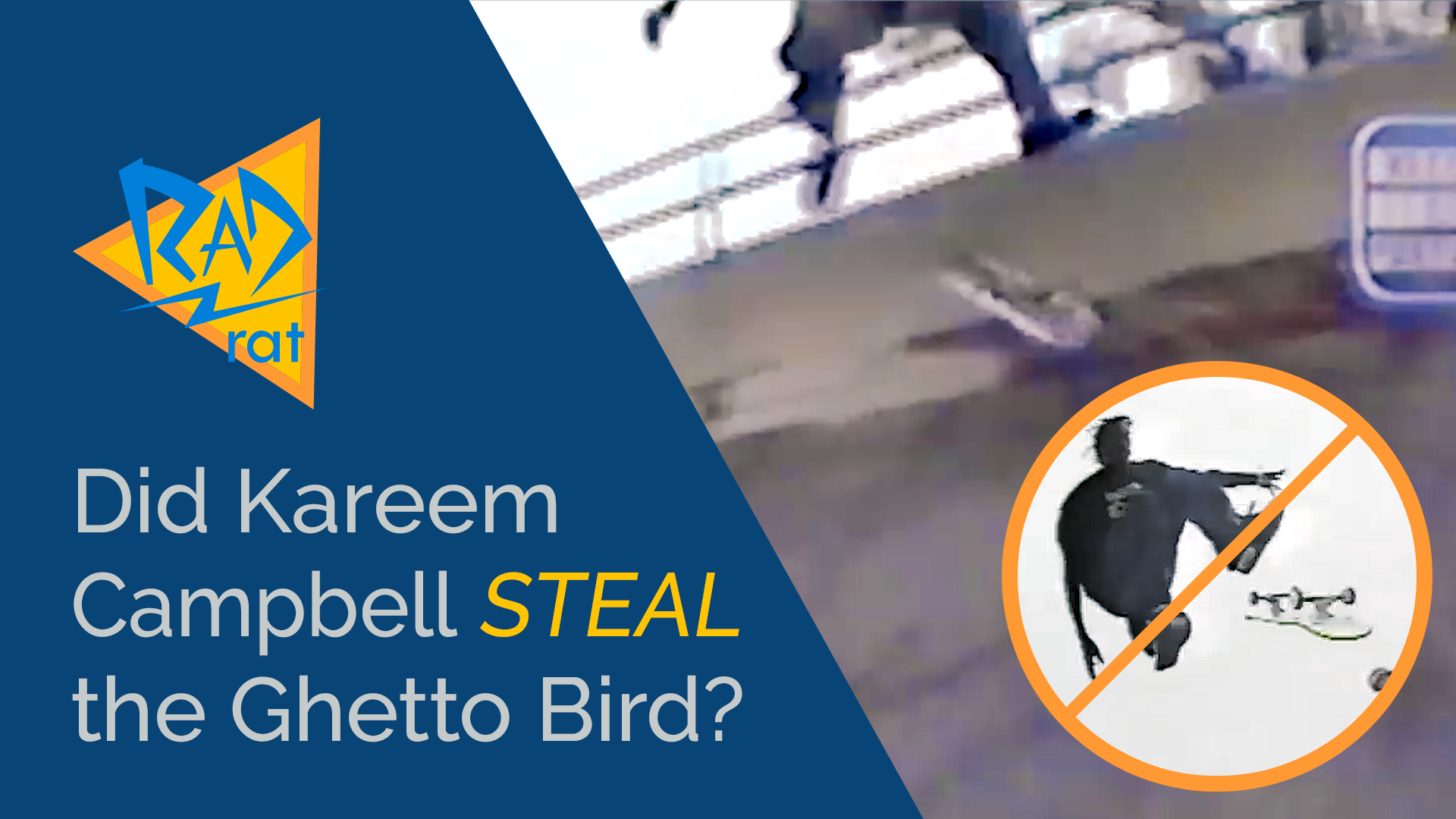 When you think of Kareem Campbell, one of the first things that comes to mind is his signature trick, the Ghetto Bird. I already made a video about what the trick is exactly, and one thing I noticed in my research… is that he wasn’t actually the first person to do it. Did he steal the trick? Let’s take a look and figure it out.

So there are a few issues we need to figure out before we can answer this question. First – when did Kareem do the trick first? This is actually a pretty hard question to answer, as you’ll see. So if you look up ‘Ghetto Bird’ on YouTube, you’ll usually see this very low quality version, which is taken from his ending video on THPS1. If you dig a little deeper, you’ll find this version.

Listen close, and you’ll notice the intro music from 411 Video Magazine. So I went back and watched the intro to every 411 I could find on YouTube until I FINALLY found it, here in issue number 30, which covers September and October 1998. The clip could be a little bit earlier, but probably not by too much. It looks like it’s shot at Woodward, which is a little strange.

You see, Campbell talks about when he first landed the Ghetto Bird in an interview. He said it was at a contest at Radlands skatepark in England, not Woodward. Radlands looks like this, so it’s definitely not the same as the clip everyone has seen before.

Unfortunately, Radlands was a really popular skatepark in the 90s, and there were a ton of contests there. Narrowing it down is going to be difficult. Another thing he mentioned is Rodney Mullen was there with him, and he told him not to try the trick, and to just stick to his lines.

Here’s the weird thing: Rodney Mullen never competed in street competitions. I haven’t seen any footage of him at demos at Radlands either – and every last frame of Rodney Mullen footage is very well documented. He’s one of the most popular skateboarders in the world. So when did this actually happen?

It’s not entirely unlikely that Mullen and Campbell were traveling together as part of a team tour, and Mullen was just attending the contest without entering. So that must have been when they were on World Industries together, from around 93 to 96. Kareem wasn’t doing nollie hardflips yet in 93 – as you can see in his New World Order part – but it’s possible he did it around the end of that period. But he had quite a few video appearances in 1996. You’d think he’d show off his signature trick in at least one of them.

Honestly, I think he’s just misremembering the details, and he only did it this one time, around September ‘98 – that would go along with his claim of this being the ‘craziest thing he ever did’. You don’t really say that about something you did more than once. If he did it before that, it was probably around 1996.

On the other hand, here’s Rob Carlyon, a small time Am. You see, back in the day, 411 Magazine would feature a few up-and-coming skaters in their mini feature called Wheels of Fortune. Here he is in their very first issue, which covered Spring 1993. And being the first issue, this footage could potentially be significantly older than that, maybe even spanning into late 92.

Anyway, here he is with a Ghetto Bird.

Alright, so the second issue is – was that really a Ghetto Bird?

Now I made a whole video about what the trick is. And to put it simply, it’s a nollie hardflip late backside 180. Luckily, both skaters are regular, and both are doing it on a bank, so it should be a simple apples-to-apples comparison. But check out that video for a more thorough discussion.

Rob rolls up, does the nollie hardflip (and the board bounces a little bit), then catches it pretty much straight, lands just shy of 90 degrees, and pivots the rest.

Now here’s Kareem’s again. He rolls up, pops a huge nollie hardflip, catches it straight, then starts the late 180, landing just shy of 90 degrees, then he slides a few more degrees and kickturns. His is a lot cleaner, but that’s not really the point.

Here they are again, side-by-side. I don’t see much difference. If Kareem set this in a game of SKATE and Rob came back with that, there’s no doubt it would have counted as a match.

But just because some Am did it first doesn’t mean that Kareem stole it, right? That’s true, and that’s our third issue.

You see, there’s really no way to know this for sure, but Kareem is actually featured in that same issue of 411 during the contest footage of ‘The Brick’ contest in New Jersey.

Now I don’t know about you, or Kareem, but if I was featured in a new magazine in a new format, I would probably watch it. And it was released on VHS, so it’s not like he could just jump to the contest footage part that easily. I’d say it’s very likely that he watched this video. I reached out to Kareem and Rob, and unsurprisingly, didn’t get an answer from either of them in any way.

But! Did he steal the trick that he’s most well known for? It’s impossible to say for sure. But my theory is that he saw the trick years before, and when he later got really good at nollie hardflips, he was “inspired” by what was actually a memory. So, more of a subconscious plagiarism than an actual theft.

Well that’s all for this time. Do you know about any unsung heroes in skateboard history who deserve a shoutout? Or anybody who gets maybe a little bit TOO MUCH credit? Tell me about them in the comments. I’d love to feature them in upcoming videos. Until then, here are some more recent videos that you might like. Thanks for watching.

I mentioned in the video that I never saw him do another one, and a commenter showed me this one. Sorry, I lost where I wrote down your name. ShilohGR mentioned it, but someone actually sent me the link too. Yep, straight up ghetto bird. Not hugely important, but there it is. I wish I had this clip when I made the video explaining what it is, because it makes it very obvious that it’s actually a big spin, just with the 180s separated. A lot of people got hung up on me saying that the nollie hardflip is backside and the late 180 is backside. If you don’t know why nollie spin directions are backward, there’s a video about that up here. But the point is, the spin is continuing, not rewinding. Also, BaseNoGod sent me this one from an Axion tour. Thanks for sending that. So I guess it was more of a signature trick than I thought.