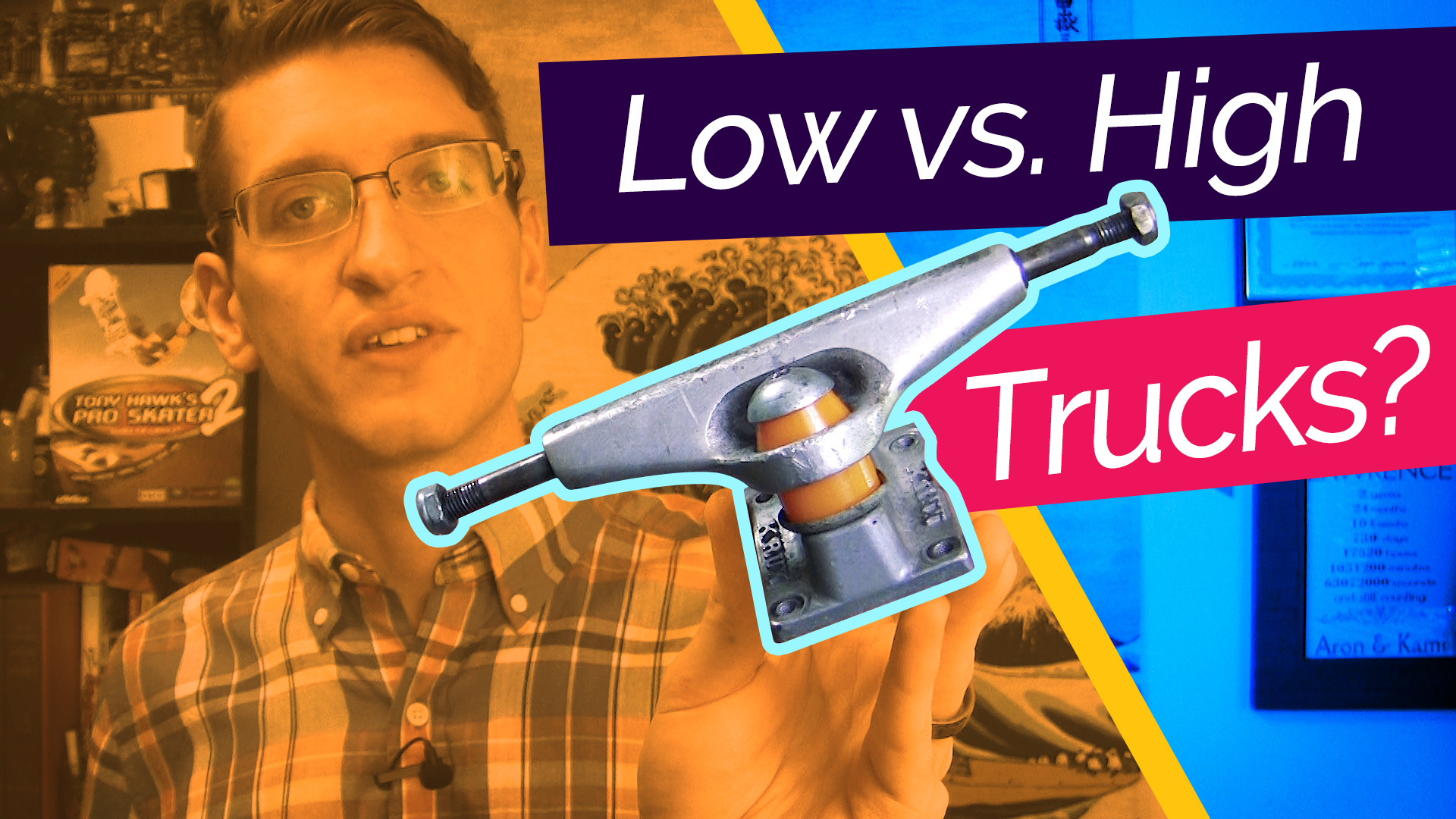 A lot of people have asked me to talk about this, so I decided to promote it to a full episode with research and everything instead of just talking off the top of my head.

So the first thing I wanted to do is actually figure out what the difference is between high and low trucks. And this was harder than I thought. I wasn’t able to find any brands currently selling high, low, and mid trucks that actually list specs on their websites. I looked through official sites and online skate shops, and just couldn’t find anything. Destructo, for example, has a ton of different truck lines, and basically no information about them at all. But I do have a couple examples.

Krux – Standard height trucks are 55mm tall, and weigh 335g. The Downlows are 52mm and are 3 grams lighter at 332g. I switched from Downlows to standards, and I can say that it’s basically unnoticeable. They turn and feel about the same. That 3 gram weight difference is essentially nothing. It’s like a couple of paperclips.

Another brand I found specs for was Venture. The lows are 48.3mm, and the standards are 53.5. Some of their lines have high trucks too, but they were also 53.5, so standard and hi are the same thing in Venture land, I guess. It’s funny though, even with models based around weight, like the V-lights, they actually don’t list weights anywhere. So I can’t compare those for you.

Independent has two different sized models right now. The stage 11s are 55mm and the titaniums are 53.5.

So, when you compare within a brand, low and standard have meanings, but not really compared to each other. Bullet standard trucks are half a millimeter lower than Krux Downlows, for example.

The lowest I found, keeping in mind that most truck companies don’t publish this info openly, is the Tensor Maglights at 45.5.

This kind of blows me away. People have their wheel preferences down to a single millimeter. Keep in mind – half the extra height will be above the axle and half below, so the board will actually only be a half millimeter higher. Switch truck brands, though, and you might be up or down 3 or 4 millimeters – and there’s almost no way to know, because this numbers are not listed most of the time.

It’s completely noticeable, so what’s are the pros and cons?
It seems like the skate industry has been really obsessed with low trucks for a long time, which seems like it’s finally cooling off a little. What are the supposed benefits of low trucks? Honestly, I don’t really know. If you look it up, you’ll find buyers’ guides on skate shop sites and stuff like that, and they all say lower trucks are more stable for flip tricks, or they’re better for tech and flatground.

I can see how this might be true in theory, because the center of gravity is closer to the deck. So it might flip a little easier. Of course, a thinner deck would probably help with that more. I don’t know if stability is really a thing here. Tall trucks don’t tip over or anything. I switched from tensor lows with 52s to mids with 56s and after getting used to it, I didn’t notice too much of a difference, and flatground tech is what I do most. I didn’t lose any tricks making that change.

The other big supposed advantage is the weight. But specs are hard to find for this too. Krux has a 3 gram difference, but it’s way too hard to find comparable specs for anybody else. Tensor published this table of different truck weights as a marketing tool – they show a 2 gram difference between their high and low. But with the maglights, it’s 20 grams! That’s about an ounce and a half over both trucks. But it’s kind of random. Unless you go to the skate shop with a ruler and kitchen scale, you just have to find something that works for you and stick with it.

So what are the downsides to low trucks? The biggest thing is wheelbite. Less clearance means smaller wheels. I moved to 56s because I built a miniramp and I couldn’t keep speed with smaller wheels. If I crammed them in there, I’d get wheel bite doing a kickturn.

Another big downside is kingpin clearance. To get lower and lower, there are some tricks, like inverted kingpins and stuff. But I saw a review of the latest version of tensor lows, and he said that the kingpins were so bad that they’d hang up on everything, not just smiths and feebles. Pro tip, these are ultra low because of their bushings. Switch them out and you’ll have some clearance. But it’s interesting to me – trucks that are supposed to be more stable and better for tech are harder to do technical grinds on… although not all low trucks have clearance issues.

Speaking of clearance, taller trucks and taller wheels can clear slightly bigger rocks, which is a big plus, in theory.

But the biggest advantage of higher trucks is the added pop. This is kind of controversial, because I’ve seen a lot of arguments on forums and reddit about it, but it seems like, if you correct for how used to it you are, all things being equal, higher trucks will pop higher. And there’s a really good reason for that. The higher the truck is, the more of an angle the tail will hit the ground. It would be like having a steeper tail, without having to actually have a board with crazy kicktails you can’t even stand on. Also, since the tail has more distance to cover before it hits the ground, it has more time to gain speed from your snap, and it actually hits the ground going faster than it would otherwise. So you pop harder with the same amount of effort.

This is why I think the quest for the lightest possible skateboard is kind of misguided. If you get lower trucks because they weigh less and you’ll be able to ollie higher because there’s less weight to pull up with you, that might not work. It might make more sense to drop that extra 3 grams somewhere else, like taking one key off of the keychain in your pocket. Or wearing short sleeves instead of long sleeves. That’s less weight to pull with you in the air too. I kind of think of bikers with pro level gear. Where I live, everyone rides bikes. Every road has a bike lane, and there are bike paths and stuff. Sometimes, you see someone with all the pro gear. They have the tight, aerodynamic bodysuit on with the fake sponsors, they have the helmet with the tail on it for aerodynamics, they’ve got super expensive tires and all that stuff. They’ve got the carbon fiber frame that weighs slightly less than other bikes…. But then they’re 45 pounds overweight. Are you really feeling that difference? Sure, that $3000 bike is better than the one I got at a garage sale, but was it worth it?

Except, in this case, there are downsides to the low trucks too. Which would make it counter productive instead of just a waste.

Anyway, as someone who skated low trucks for a long time, I was surprised at some of the stuff that I found in my research for this one. As a guy who does mostly technical flatland stuff, you’d think I’d have a super low setup, but I haven’t found that that actually helps. I think next time I buy wheels, I’m going to get some 50s and just see if the height difference I get from that helps with tech. But I really don’t think that it will.

Let me know your experiences below. I haven’t skated a ton of different trucks because I don’t go through them that quickly. I’m happy to switch out a set of bushings and just keep on the same ones for years. But if you’ve skated a bunch of different ones and you’ve switched one way or the other, let me know.