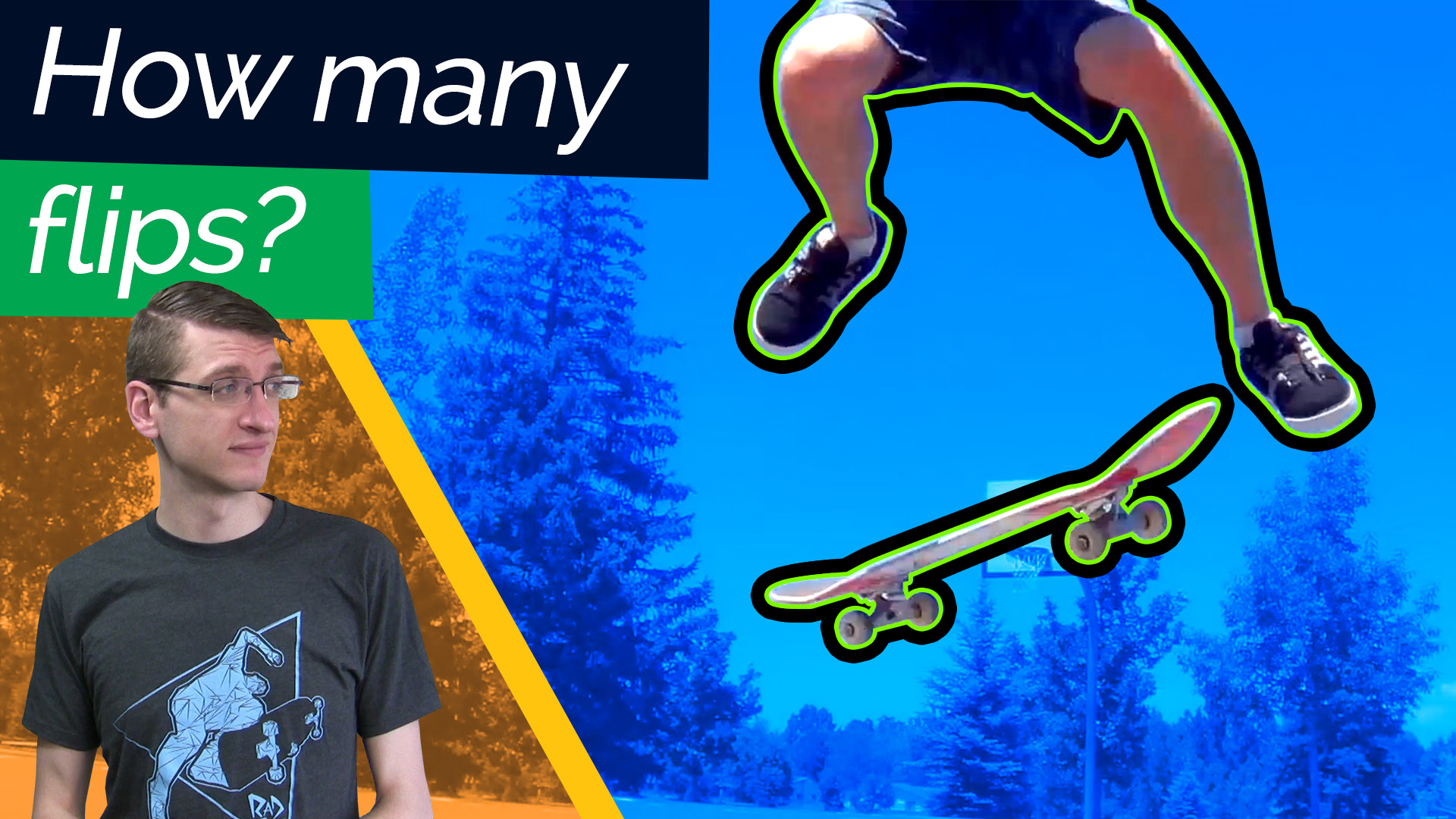 How many flips are physically possible on flat? You’ve seen triple flips, and probably quad flips, but what about 5, 6 or 7? With the highest possible jumps and hardest flicks, what’s the most we could ever do?

OK, the first thing I needed to figure out was the maximum amount of airtime you can get. My first thought, of course, was to look at the highest ollie and figure out how long he’s in the air. So that’s what I did. Here’s the most recent record that I know about. This is Aldrin Garcia breaking the record a few years ago. I watched the footage, and counting from the noise of his pop, I got about 20 or 21 frames, which is .7 seconds. I ran with that number for a while, but I realized that we can do better.

Here’s the thing. If you’ve ever done a triple flip or something that you don’t have time to catch, you might know that you can hold in the air a little longer if you land with your legs bent. So you suck your feet up, then just leave them there and land like that. It’s dangerous for your knees and it can hurt, but you can do it. For the record ollie, he clears the wall, then just slams the board down. He’s not trying to float.

I tried to test this out myself and film myself jumping and trying to land with bent knees. I have a bad knee, so I only got to do this twice before it hurt too much, but I managed to get the exact amount of airtime as the world record ollie.

So I decided to look into basketball.

Apparently there’s something called the one second rule. It’s impossible to get more than a second of airtime and land back on your feet. Olympics high jumps can get a little more, but it’s a different technique that doesn’t really translate to skateboarding.

A professional basketball player can get about .84 seconds. Apparently, the most airtime Michael Jordan ever got was .92 seconds. But basketball players can get a running start, and that helps get momentum going. You can’t do that on a skateboard. Even if you’re rolling fast, you’re still jumping from both legs at the same time. It’s basically like jumping from flat. So I’m going to go with .85 seconds of airtime. Which might be a little high, but I think it’s physically possible, and that’s all that matters. I’m going to ignore the extra weight of the skateboard. Professional basketball players aren’t built for airtime. I’m sure you could shave off a couple of pounds of muscle from the arms and chest and stuff and be able to jump just as high, and use that for the board.

So that’s airtime, but what about flip time? The board doesn’t start the instant you leave the ground. I looked at some footage of me doing a double flip, and it looks like only 3 frames before the board starts to flip. At 60 frames a second, that’s .05 seconds. So now we have .8 seconds. That’s the maximum time that the board can be flipping on a professional level jump. It’s unlikely, but possible.

OK, so the next thing we have to do is figure out how hard you could possibly flick the board. The first thing I tried was looking up the force of a professional sports kick, like soccer, football, or MMA. But the numbers I got were ridiculous, like a 50 flip. But that makes sense. If a football player runs up to a board, winds up, and kicks through it like a field goal kick, it’s going to go flying. But you can’t run up to the board while you’re standing on it, and you can’t wind up. You’re standing on it, then you kick. And it’s out, not forward. So we can’t really work with that. Of course, there’s no data online about the force behind a flick, and I don’t have one of those Rocky 4 punching bag force things. So I had to test it Mythbusters style. I kicked as hard as I could on video with a ruler in the shot. So I could measure the final speed and force of my kick. This is already going to be a crazy amount, because I don’t have to worry about exact technique here. But I’ll still end up rounding it up because I’m not a world class athlete.
OK, so there’s a complicated calculus way to figure out the amount of momentum in an object. And it’s pretty confusing. So let’s do it.

There’s something called the moment of inertia. Which isn’t a moment in time. It’s basically a custom formula for an object to figure out how much every part contributes. In other words, for your leg, your thigh isn’t moving as much as your toe. So its mass is contributing less.

We need to figure out the shape. At first I was going to go with a cone, since your thigh is a lot thicker than your ankle. Then I would put another cone on the end for your foot. But I think that’s way too complicated. The thing is, as a unit, your leg is basically just a cylinder. Your foot isn’t as heavy as your thigh, but with the flick, it’s moving a lot faster, so from a momentum standpoint, it’s pretty much the same thing.

Also, as an aside, this is why you don’t see as much heelflip stuff, like triples and quadruples. Since the flick of a heelflip is so much less of a motion in your foot, the speed doesn’t help as much.

But, this ended up not working, and it’s obvious why. You don’t keep your leg straight while you flick, so you aren’t getting that kind of momentum out of it. Let’s look at some footage. This is me kickflipping as hard as I possibly can. My knee doesn’t even move during the part my foot would be hitting the board. So we can only use the lower part of the leg.

So, we can think of the foot and ankle as a cylinder. Yes, your ankle flicks, but I’ll count that in as part of the rotation.

So with a cylinder rotating on one end, this is the formula:

OK, so let’s get some numbers. It asks for mass. I can’t weigh my own leg, but I found a chart of average percentages. Our imaginary skater here is tall enough to jump like a pro basketball player, but weighs slightly less. Michael Jordan was 216 when he played, so let’s call it 200. That’s 91 kilograms.

The next thing we need is the amount of rotation per second. Here’s the last part of the flick here. My lower leg goes from 74 to 137 degrees in 3 frames or a tenth of a second. That’s 630 degrees per second.

Of course, we can’t use degrees, because it’s too easy, so we have to convert that to radians. 11 radians per second.

The last thing to do is figure out the amount of kinetic energy. Here’s the formula.

This is the moment of inertia, which we calculated as 1.28. This is the angular velocity, which is 11.

77 Joules. So like I mentioned, I’m not a professional athlete. Other people can kick harder. I’m using the weight and height of a basketball player already, but I’m sure they can kick harder too. So I’ll finish rounding it up by bumping that number to 80 Joules.

Alright, so that’s the spinning energy of the skater’s leg. They have to transfer that energy to the board. You can’t transfer all of it, because your leg still follows through. Transferring all the energy would mean your leg stops moving. But it doesn’t. So let’s call it 80% transfer with 20% left over for follow through. The board will receive 64 Joules.

So let’s work it backwards. Here’s the formula from earlier.

The energy is 64. What about the moment of inertia?

So this is a little complicated. It depends on the board. I would use my freestyle board as an example because it’s smaller and lighter, but you can’t forget about pop. I don’t think you could pop this thing for a total hangtime of .85 seconds. It’s just not practical. So this is my street setup. It’s an 8 incher and it has freestyle wheels. So I’m going to round it down a bit. Let’s pretend it’s a light 7.75.

Since this is spinning around its long axis, the formula is different: 1/2 mr^2

This is for a cylinder, but it’s pretty close. Most of the weight is here around the trucks. And there’s a little more out here: wheels, deck, and everything. So a cylinder is a decent shape to use.

My board is 2.3 kg. Like I said, we’re going slightly smaller and lighter, so let’s call that 2 kg. What about the radius? Well, it’s not 7.75, because the widest point is from one corner of the deck to the other wheel. I put that around 8.25 inches.

This is where lower trucks and smaller wheels come in. That helps minimize the radius and get you more flip. There’s a lot of debate about whether it actually helps. With the numbers we’re looking at, it does, but this doesn’t count technique. Is it easier to flip a smaller board, or do you need more room for your feet? And since most people aren’t trying to do the maximum amount of flips, the benefits of a bigger board outweigh the fast flip potential. So sure, if you’re trying to beat the flip record, go smaller. But it doesn’t help a noticeable amount in single or even double flips.

OK, so the inertia here is .05. Compared to your leg spinning this way, getting a board to flip is no big deal.

2900 degrees is a hair over 8 flips per second. With a useable airtime of .8 seconds, that’s 6.4 flips. And that’s the maximum. I think we have to round it down to 6 with a split second catch at the end.

Is a sextuple flip really possible?

Here’s our sanity check. This is Ellis Frost doing a quad flip on flat. I went through it frame by frame, and it takes him about 18 frames to do 4 flips. Take that flip speed and stretch it out over our working airtime of .8, and that works out to just over 5. It’s not too unreasonable to think that a big 6’6” basketball player could flick a bit harder than him, and it’s not a big jump to get to that 6.

So, yeah, it checks out. Are we ever going to see a sextuple flip on a regular sized board? Maybe. Maybe not. You don’t see a lot of Michael Jordans running around at the skatepark. People that tall tend to have worse balance on a board. It’s a lot easier to slip out and stuff. So it’s unlikely that someone like that would get good enough at skateboarding to attempt this. That said, there was some headroom on that number at 6.4. So you never know.

Thanks to Ellis for lending me the footage.

The second part of the question was about shove its. This is harder, because you don’t hit the board. Your foot is always connected to it. So measuring kick speed and stuff isn’t really going to work. But I’ll do some quick calculations.

Not the best technique though. The freestyle way is quicker and easier – you use both feet. Here’s 10 year old Ikkei Toki doing a 720 shove it. Despite being much smaller, he’s able to make it spin just as fast – he just doesn’t get as much air, so he pivots it out. Apply this technique to a Michael Jordan built guy who’s as good as Shane O’Neill, and a 1080 might be possible.