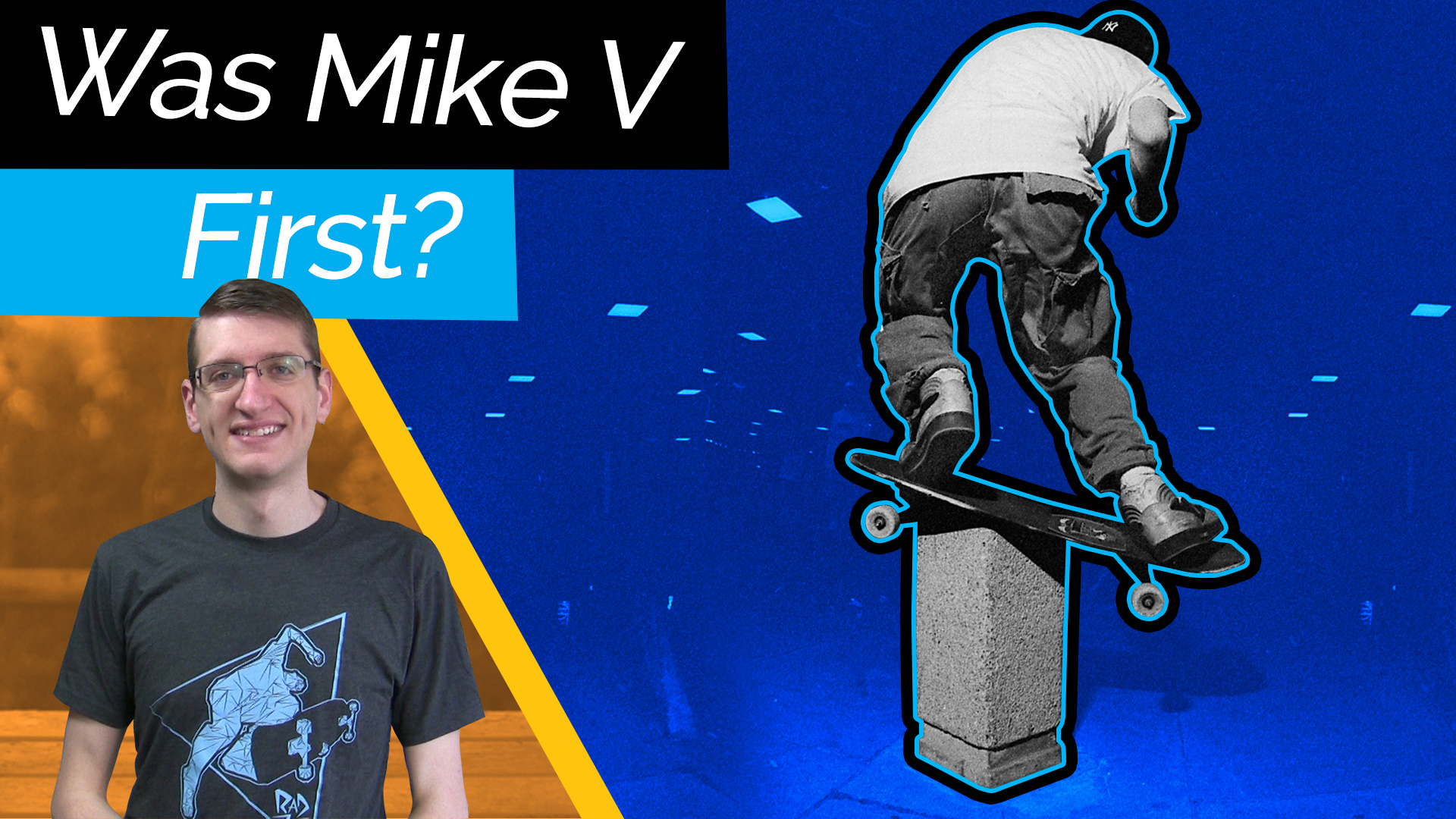 A little bit ago, Mike V posted this really interesting sequence. He’s ollieing up onto a pole, spinning on it, and coming back down. In other words, a Natas spin. What’s interesting about it though, is the date – from Summer 1988. Did Mike invent the Natas spin?

So, of course, as we know, the Natas spin is named after Natas Kaupas. It debuted in Streets of Fire in 1989, a little bit after Mike’s sequence, which we’ll look at in a second. And we know that he actually landed the trick in 1989, because he’s only ever done the trick once. Which is pretty funny if you think about it. To many people, it’s his biggest legacy in skateboarding. But it wasn’t a big deal for him at the time, and it could have easily been one of his friends. Here’s his story from his interview on the Chrome Ball Incident:

“Yeah, I think that’s the only time I ever rode out of it.

“It’s not that I didn’t like it. It was honestly just a way to kill time. A friend of mine cut hair at his shop there: Paper, Rock, Scissors. It’s still there in Venice, right up from the Pavillion. But to kill time while someone was getting their hair cut or whatever, we’d just spin around on that thing. Julien Stranger and Jesse Martinez would be out there, too. It was more just to see how many times you could spin around on it. It wasn’t like a trick.

“When Scott Dietrich and his crew came up for Streets on Fire, they asked me about spinning around on the hydrant. I wasn’t sure how they even heard about it but I had to tell him that we hadn’t yet figured out a way to roll away from it yet. But they wanted it so I tried it. We burned a lot of film trying to figure out how to get off of it. You can see where I had to kinda grab the pole to slow myself down and gain a bit of leverage. That was the only way off of it. I didn’t want to do any weird, slow spins or something. I wanted it to be a nice, flowing trick.

“I had no idea that it was gonna be so big. I would’ve never guessed that one day it would be in Tony Hawk’s video game and all these guys would know me only from that one move.”

It’s tough to nail down a date for when that was filmed, but the turnaround for skate videos wasn’t very long back then. A lot of companies were starting to put out videos every year or two. So, these days, a video part that just came out might have tricks filmed a year or two ago. But in this time period, there was a lot of cruising around and having fun. Nothing that takes a year. If it was in 88, it probably wasn’t as early as summer. Natas’s part in Wheels of Fire was filmed in 3 days.

He rolls up, grabs the pole, spins around 720, and pulls himself back off. There’s no question this is a legitimate Natas spin, because it’s the only one he actually did. But using hands is kind of debatable these days. I think your main options are doing about 360 without grabbing anything, or more by pushing off. You just can’t get that much rotation by winding up and ollieing. For Natas, the goal was to spin as many times as possible. But it’s safe to say that either way counts. It’s up to you to decide which one you like more. Yes, it is possible to spin more without grabbing, but it depends on the spot. Joe Moore did one on this big ball, but there’s a much bigger landing area because it’s so wide. Trying to ollie and rotate onto a fire hydrant or something smaller would be next to impossible.

OK, now let’s go back to Mike’s. This was published in Read and Destroy magazine in 1988. It’s important to note that it was a British magazine. So it might not have gotten a lot of traction back in California where most of the pros were based. So I think that might be why this hasn’t gotten out anywhere.

“June 1988: Soon after filming my Public Domain video part, I flew to Louisville, Kentucky for The NSA Bluegrass Aggression Session Contest in which I Skated in all 3 disciplines: Freestyle, Street and Vert. From there, I boarded a plane to the UK with Steve Caballero, Lance Mountain and Tommy Guerrero for a Bones Brigade Tour of the UK. This was my first time traveling overseas. I turned 18 in London.”

So that date seems pretty rock solid. He knows when his own birthday is.

“I remember getting out of a car at Southbank, there was electricity in the air. As soon as I put my Board down things just started happening, none of it was premeditated, I wasn’t Skating from a script. I was 100% in that Moment, and I Interacted with the environment with Honesty and Sincerity. Anything felt Possible and my Skating unfolded in a completely Spontaneous way. This was Street Skating: Total Freedom of Expression.”

Interesting. He doesn’t exactly claim to have invented anything that day, but the way he words it, he clearly wasn’t doing what other people was doing. He was doing original tricks. In other words, maybe he invented it.

I reached out to Mike to see what he said about it, and he answered! I asked if he did the first ever Natas spin. This is what he said:

“I think so. Does not compare… So not claiming anything, ha,ha!”

And that’s a pretty smart answer. If he came out and claimed to be first, I think there would be backlash. People would think he’s trying to take away from Natas or something.

So he only does a 360, but there’s no grab. I don’t know which would be harder. But that’s not the question. The question is whether he did the trick first, and it looks like he did.

But does that mean that Natas stole the trick? No. As I mentioned, the magazine was British. It’s unlikely that Natas would have even seen it. He barely even read skate magazines from America:

“I had seen skate magazines before but I never actually owned them. I wasn’t honestly huge into reading that stuff. A lot of it just didn’t really translate to me.”

Another story from that interview is how he learned frontside 360 ollies. He HEARD about Steve Caballero doing the Caballerial. He hadn’t even seen it. But he got the idea of a fakie 360 ollie in his mind. So he started trying them. He found spinning frontside a little easier, then he realized that he might as well do it going forward instead of blind. That tells you a lot. I have no doubt that Natas also invented the trick, but… probably not first.

So that’s regular Natas spins, but what about all the other possible variations?

I know of two other guys who regularly do Natas spins – Richie Jackson and Dan MacFarlane. Dan is a friend of the show and he’s helped out with research topics in the past. He recently posted a best-of video compiling all of his best tricks over the last 28 years. And he has some variations in there. So I asked him a bit about how Natas spins developed after the original one. He started doing them in 1992. Dan does them backside, but he says he wasn’t the first to do that while grabbing. But he was the first to do them no handed backside and switch frontside.

There doesn’t seem to be a ton of movement on the Natas front in the 90s, and it didn’t seem to start to catch on again until Tony Hawk’s Underground 2 came out in 2004. At this point in the series, they were trying to cram in as many new tricks as possible in the game to give people a reason to buy the game. I remember when this came out, a lot of people thought this was a fake trick. Of course, doing 100 spins while doing a handstand is ridiculous, so maybe the whole category is fake.

That’s why Corey Sheppard’s in 2005 was a big deal. It’s not the best looking one ever filmed, but I remember this making people crap their pants, because they didn’t know it was a real life trick. Some people actually thought that he copied the game’s trick.

But after that, you slowly started to see more variations start to pop up. I’m sure people were doing these in the 90s, but without easy video sharing online, it wouldn’t be that easy to actually share ideas and get the trick out there.

In 2010, Dan did the first known switch Natas spin, which he called the Satan spin – because it’s Natas backward. He actually texted Natas and asked permission to name it that and he said it was cool.

Later, Richie Jackson did a dark Natas, and he started calling that a Satan spin, because the board is upside down. I guess it makes sense either way.

Dan also did some other variations, like his own darkside variation, with a caveman and footplant.

He did it into a manual, probably for the first time. I saw someone else do this as well, but I think it was a couple of years later. He also did a few variations out of 50-50 grinds. He also did one with a shove it out.

Another guy who really pushed Natas spins is Richie Jackson, of course.

In 2005, he did a Natas shove it, I guess you would call it. When you get into variations, it starts to get complicated. He doesn’t technically spin his body at all, so does it count as a Natas SPIN? I guess so. We have nothing else to call it.

Another one of his big contributions was the nose Natas – which looks like this. This was a big innovation, making a lot of other options possible. Dan built off of that with a nose to tail, which Richie later did too.

Richie did a kickflip into a dark Natas, he also did a ghost Natas, and a few other really cool variations.

There are a couple other really notable ones, like Jordan Sanchez, somehow managing to kickflip out of the spin.

And David Gravette pole jamming in and out of one as well.

So there’s a brief history of the trick. If there are any other important moments in Natas history that I missed, let me know about that below.