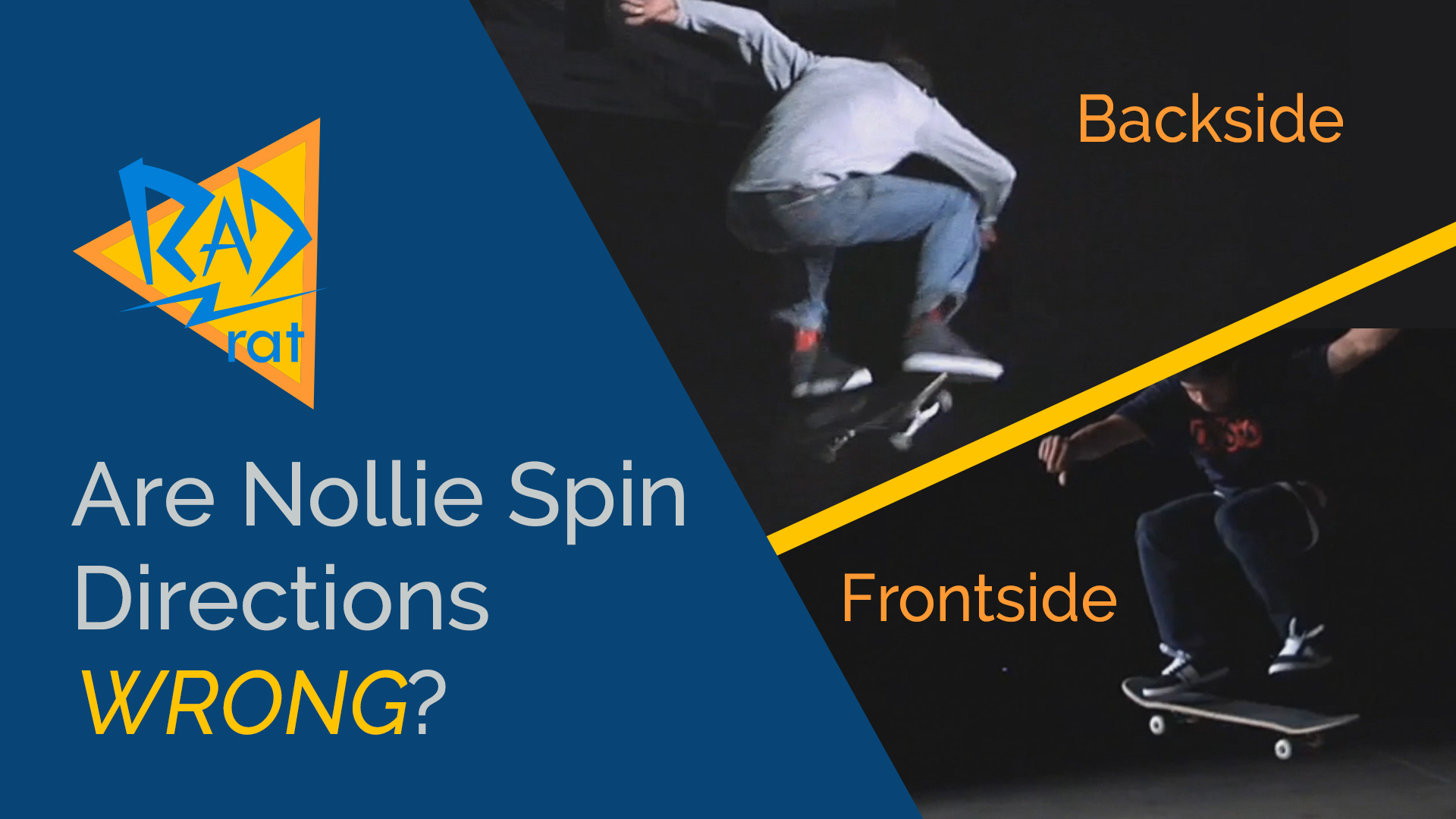 You know, a lot of people get fakie trick spin names wrong, or some people have the nollie ones messed up.

You know what, let me show you what I’m talking about really quick. Here are some clips from the trickipedia on the Berrics. A nollie backside heelflip from a regular skater and a frontside half cab heelflip from a goofy skater. They’re the exact same trick. Even though they look 100% the same, one of them is frontside, and one is backside? Is one of these wrong?

I remember when I first learned about this, I argued with it a lot. I thought something was definitely messed up. So why are these so weird?

Let’s take a step back from spins and look at grinds for a second. This can help us understand the reasoning behind this.

Look at a nollie nosegrind versus a fakie nosegrind. Again, these are trickipedia clips from a regular skater and a goofy skater. The tricks are nothing alike – one is on the front truck and one is on the back. How are these both nosegrinds?

Let’s think back to the 80s. Imagine that you just have a tiny little kicker for a nose and a big old fishtail, and nobody was doing switch at the time. Just delete switch from your brain. It doesn’t exist.

Let’s compare that to nollie. Again, switch still wasn’t really a thing. It was very uncommon to do switch stuff until later. So you roll up, pop your nose, then land on your nose and do a grind. Of course it’s a nosegrind. It looks and feels exactly like a nosegrind. Nobody is thinking about it as a switch fakie 5-0.

So here’s how you can think about it. In nollie stance, as soon as you leave the ground, you’re in your normal stance again. If you put the front truck down, it’s a nose grind, nose manual, nose grind. If you’re rolling fakie, the front truck is a 5-0, manual or tailslide. Boards are pretty much symmetrical now, but just imagine you have a very obvious big tail and tiny nose and it will make sense.

So let’s jump back to rotations. It’s kind of the same deal. Fakie just means backward, so if you do a backside 180, the same motion while rolling backward is still backside. Then nollie, of course, is just regular stance rolling forward but popping the nose. Just like you can nollie and put the front truck down in a nosegrind, you can nollie and then do a normal backside 180.
It’s a bit confusing because a nollie frontside bigspin is actually the easy way, when it’s harder in every other stance, but it’s not too hard to get used to.

So why do people still get so confused about this?

Let’s talk about today’s ambidextrous skate style. You aren’t a legit skater unless you can do everything in every stance. I think it’s a lot more common these days to think of fakie as a switch nollie. Switch is really common and normal these days, so it’s just a way to pop off the nose while rolling switch. And it confuses people to have to think old school and consider it to just be rolling backward.

Another big issue is video games we all grew up with. I don’t know of any video games that do a great job making nollie and fakie look different at all. They don’t go into the detail of having the shoulders turned so it looks like you’re going backwards. The Skate series kind of does that sometimes, but it also does it nollie, which doesn’t really make sense.

So let’s talk about Skate. You know – Nollie frontside and backside? No problem. Fakie? …. Oops. Yeah it’s very common for video games to get this wrong. It doesn’t make sense in a perfectly symmetrical ambidextrous video game.

Most games historically don’t have rotation directions, like Grind Session and the first 7 Tony Hawk games.

Thrasher has frontside and backside, but it’s got fakie wrong.

In Project 8, they added in directions… and fakie is the only one they got RIGHT. Look at that! This game is a mess.

And then OlliOlli 2, that actually has nollie directions wrong, even though that’s the one that makes more sense to me.

Shaun White is probably the worst because it doesn’t even have stances. Doing a trick off the nose is ALWAYS a nollie, even when it’s fakie.

So it’s not surprising that a lot of kids got it wrong. It was a hot topic of debate on forums back in the day. Not everyone read skate magazines and could see captioned pictures, but those who did might have thought they were wrong.

It’s only modern mobile games that seem to get it right – True Skate, Skater, and probably some of the other ones. Do you guys know about any other big console games that have it all right? I haven’t played Tony Hawk 5 yet, but I’m sure it’s all messed up.

But anyway, hopefully things are changing. The Berrics trickipedia gives people an ‘official’ reference point, and if games keep going in the right direction, hopefully that will help too.

Tell me, when you first started skating – did you and your friends figure it out? Back when I was a kid, everyone in school had nollie wrong. It was based on the feel of the trick, so a backside bigspin was the easy way.