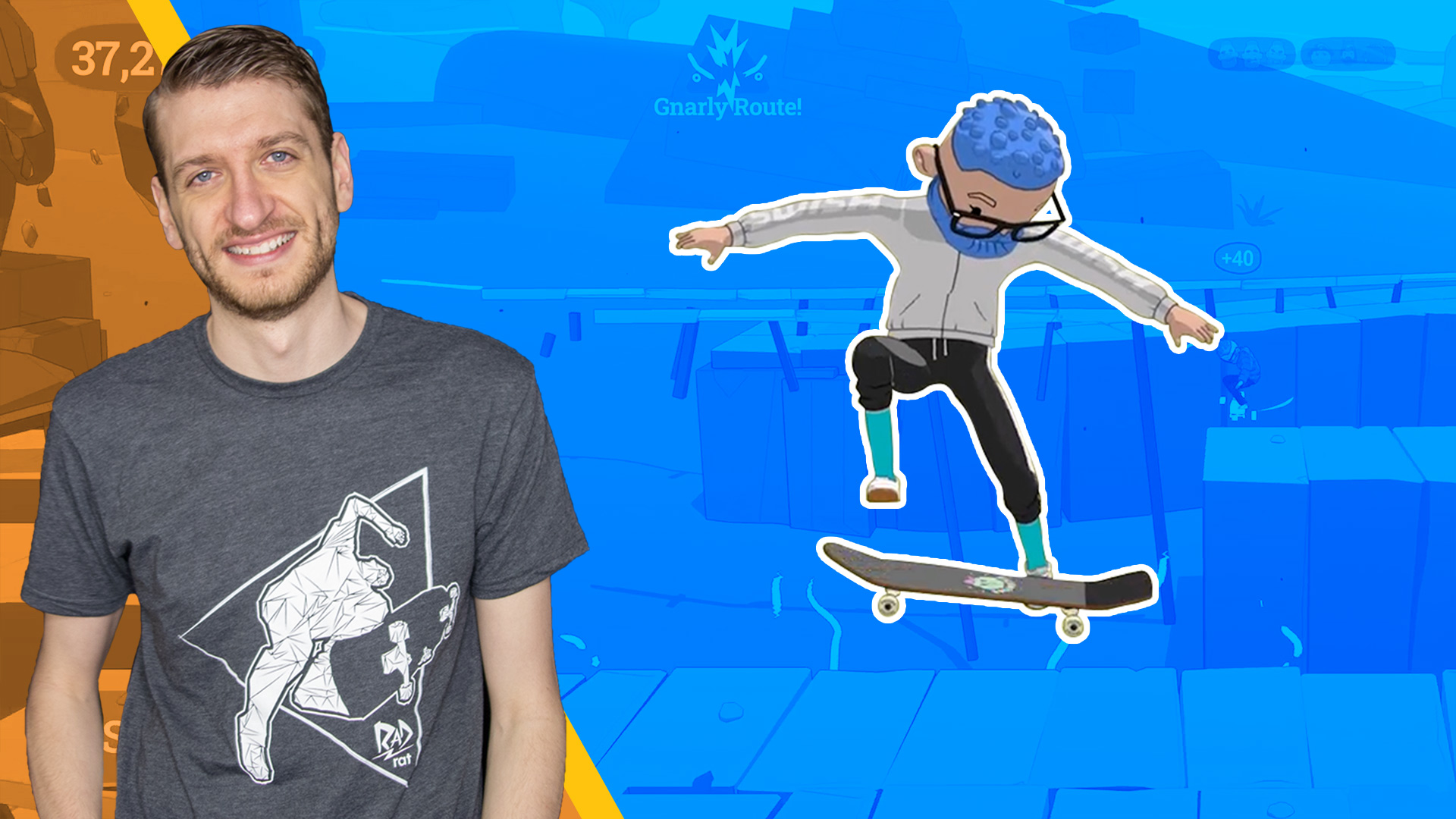 You know, I’ve got to admit. I had some trepidation going into this game. The last two games in the series were hard. Like, tear out your hair and smash your controllers hard. And in the trailers, it showed that this new version added in a bunch of stuff by moving to 3D. Branching paths, wallrides, even crystals that you have to hold grabs to break through. Is this going to make the game even harder? Is it going to ruin the enjoyment I got out of the originals?

I grabbed this game on the Xbox Series X. The first time around, I played on PC, and my controller had enough lag to make it even harder than it should have been. When I switched to Xbox, it worked a lot easier. That’s the level of precision you needed for OlliOlli 2.

This time around, I was surprised by the difficulty. But before we get into that, let’s take a look at the art style.

Overall, I like the style of the game. It’s new school, with lots of vibrant and pastel colors. The character designs are varied. Sometimes in ways you don’t want though. The characters they show on loading screens are sometimes eye-jarring color and pattern combinations. But the character customizer is very extensive. You can make anything you want in here, in whatever crazy colors you can dream up. And you unlock a ton of stuff as you play, including animations for how you get on and off your board. This is a level of polish that the originals didn’t come close to, and this stuff goes a long way toward adding longevity to the game.

Speaking of style, the last game was strictly 2D, with a very realistic looking skater. I liked the style, but it was kind of generic. I think this is a big improvement.

They also added in a story to go with the style. There are Skate Godz in Radlandia, and there’s one person who’s basically a high priest that can commune with the gods. And you’re competing to take over that role by mastering all of the gods’ different zones. Each zone teaches you some new tricks. It’s a good framework for the game, and I’m glad it was there, even if I usually skip the story parts.

Each level starts with a cutscene with these characters that help explain the lore of the game. Sometimes they have tips about where to meet side characters that appear in levels, but it’s mostly fluff. Luckily it’s easy to skip.

If you’ve never played a game in the series before, the controls are simple. At least at first. Soon enough it’s going to sound like you’re playing Through the Fire and Flames on Guitar Hero. And it’ll be just as hard.

To do a trick, you can dial it in on the left stick. If you hold down and let go, you’ll ollie. But it can get pretty complicated too, with half rotations, full rotations, and even rotations that go back and forth for special tricks. Let’s take a quick look at the tricks.

You’ve got your basics like kickflips, heelflips, varial flips, 360 flips, and some more interesting stuff like casper flips, fingerflips, kickflip underflips, font foot impossibles. The amount of tricks that they fit into the control scheme is really impressive. Even if you’ll be doing them blindly most of the time because you’re always looking ahead for obstacles.

But on top of the flip tricks, there are grabs too, mapped to the right stick. When you’re in the air, you move it in a direction, and you’ll do a grab. Hold it for long enough, and it gets tweaked. Also, if you hold B, you can do late flips. This game is less about high scores than the originals, but when you need to get one, there’s a deep bag of tricks to pick from.

The level goals are quite a bit different from the originals, in a way you might expect me to be upset about. For example, Olliolli 2 would often require a specific trick, but that doesn’t happen in this game. It might ask for a tweaked grab or an advanced flip trick, but it doesn’t ask for specific tricks, which makes it feel more like a video game and less like a skateboarding game, if that makes any sense. They also simplified some things, like taking out nollie tricks or landing in a revert. But then again, they added in firecrackers.

I feel like this is an approachability thing, to make sure the game makes sense to non skaters. After all, how many gamers with no skating experience would easily understand that there’s a difference between a varial flip and a varial heelflip? But for me, it keeps one more thing off my mind. With how frenetic the levels get, trying to remember a specific move with the analog stick is a big ask.

What you’re doing instead is often reliant on collecting things, like popping balloons, or hitting vultures. Sometimes it’s avoiding things, like ollieing over bees. Sometimes it’s confusing, like having to scare deer. I actually don’t know what that even means, and I never managed to get that one crossed off. But I’ll figure it out if I end up deciding to complete the game all the way.

One new thing in this game that I really like is the alternate routes. At first, it’s simple. Just hit X to turn onto this other path, which is usually harder, with some more obstacles to tackle. Collectibles are often in the gnarly routes (as the game calls them), but not necessarily. As time goes on though, this gets more interesting.

They get more sophisticated and they can become loops, if you’re good enough. Check this one out. I have to high five these guys multiple times. But as I go through the level, things collapse. Sometimes a wallride is single use. Sometimes platforms fall. So you have to leave one behind for yourself later. Then if you make it back to the right section, you can transfer back to the beginning and do it again. Imagine what the high scores are going to be like on these levels when they’ve been out for a while. It’s going to be crazy.

So you can high five a character, which happens automatically, or you can ‘meet’ a new character, which is a button prompt. If you meet a character, they often have a side quest for you that’ll appear on the map later. These can be really hard. Like this one, where I just can’t reach the last collectible no matter what I do.

Let’s talk about the difficulty. The game is split up into a few different worlds, where the characters will teach you new tricks. Grinds in the first one, wallrides in the second one, grabs in the third one, manuals in the fourth one. And they add in complications as it goes, like hitting A to land perfectly. In the last game, perfect landings were very important. In this one, they feel like kind of an afterthought.

Overall, this game guides you through a lot better. It introduces a few things, helps you master them, then adds on. It’s definitely easier and more forgiving, but when it gets hard, it’s just as frustrating as last time around.

For example, take a look at this section. This is pretty early in the game. I’m trying to collect this inflatable cat, and land in the bottom path to get the rest. But it feels completely random. If I land in the grind and jump to collect it, I smash my face against the top path. If I go slow enough to not hit it, I’ll miss the collectible or I’ll land, but then not have enough speed to clear the obstacles down here. So what do I do? Well, I don’t know what you’re supposed to do, but what I did was just try it over and over and over again until I got lucky and made it through.

One thing that really helps you is that you only have to do something once. If you collect all of the things you need, it gets crossed off. In the last game, you had to do the challenge and then make it to the end of the level. This one doesn’t require it, and it also has checkpoints that save you some time on redos.

Another thing adding to the difficulty is the precision you need to keep your speed. It seems like grinds slow you down a little when they’re flat, but they speed you up more downhill than just riding. At least I think. So if you get into a grind too late, you might not have enough speed for the next jump, even if that doesn’t make any sense, physics-wise.

So there are some quirks like that that you just have to learn, but there are also some things I never figured out. In the second to last world, I got to these challenges. In this one, I have to do an advanced flip trick in and out of a wallride. Kind of tough, but I can do it. Here it is. 360 shove it in, dragon flip out. Both advanced flip tricks. No luck.

But wait, maybe I have to be doing the level’s manual challenge at the same time? This would be the first time it asks for it that way, but let’s do that. 540 flip in, dragon flip out. Manuals both ways. Again, nothing.

The next one is the same way. I have to grind with manuals in between. One of the extra challenges is to spin into and out of every grind.

It’s stuff like this that will make it impossible for me to actually complete this game. Beat it? Sure. But there’s nothing I hate more in games than not knowing what to do. I feel like I know exactly what the game wants, but clearly I’m wrong. And on a super tight twitch game like this, it really should be solid.

After my disastrous playthrough of Skate Bird, I’m ready for some nonsense. I considered that I might have to do them in order, but I proved that that wasn’t the case. So I genuinely have no idea how to beat these, and I don’t think I’m going to spend the time redoing it countless times until it decides to show me a little respect.

So, those are the main challenges. But at the bottom of the screen on all of them are the high scores, where you can beat the locals. If you’re missing the original games, you can still have that kind of experience here. Squeezing in as many tricks as possible and trying to do everything in a combo, while not hitting obstacles and remembering to do a grab every time you hear a crystal. It gets hectic. But at least it eased you into it.

So, is it worth it to get OlliOlli World? It’s $30, and it’s available on pretty much everything. I had at least 30 bucks’ worth of fun with it, and I feel like I’m going to spend some more time completing everything.