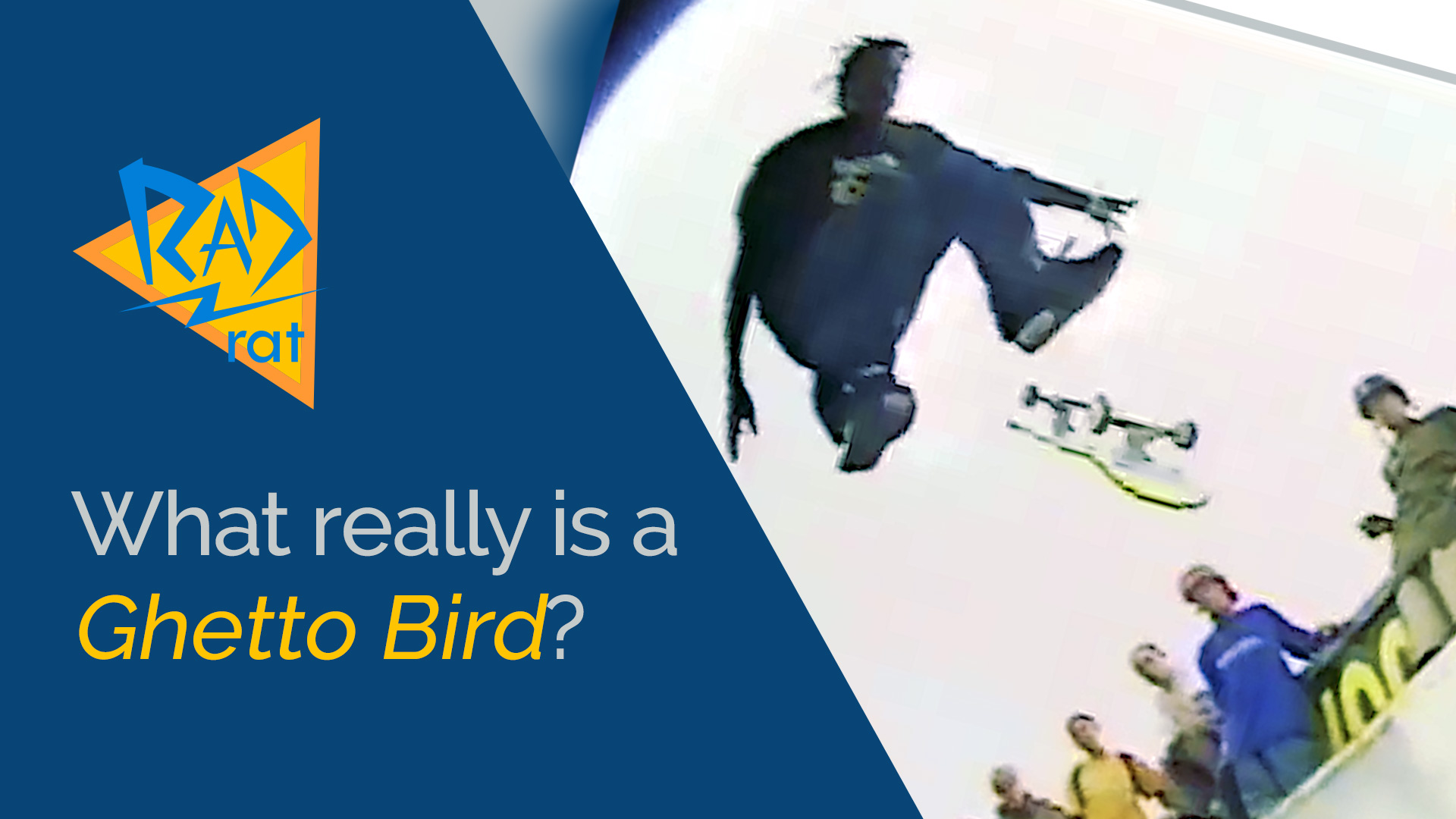 In the world of confusing skateboard trick names, nothing is more vague than ‘ghetto bird’. It doesn’t mean anything, and not a lot of people seem to know what it actually is. So what is the trick? Where did it come from? Let’s take a look.

Unlike a lot of mysterious flip tricks that are vaguely credited to Rodney Mullen, we actually know exactly where the ghetto bird came from – Kareem Campbell. And we actually know where the name came from – there was a 1993 song by Ice Cube called “Ghetto Bird”. In the song, the term refers to a ‘bird’, or helicopter, that flies over the ghetto in search of crime. So when Kareem Campbell invented a trick that had a lot of spinning in it, it was named after a cool, modern term for helicopter. That’s not the first time that happened. In the 80s, Rodney Mullen invented the nollie backside 360, which he called the helipop. Originally, ghetto birds were in nollie stance, so maybe it’s a reference to that trick. Kareem actually gives Rodney a little bit of credit for the trick, because he taught him to think tricks through and visualize them, which eventually led to him first landing the trick.

But anyway, do a YouTube search, and what do you see? Regular stance hardflip late backside 180s. In other words, a hardflip revert, because your board changes direction. Not much of a helicopter, if you think about it, because it only does a 180 each way.

I checked if the Berrics had a trickipedia entry, and when you Google it, you’ll find Chris Joslin doing a hardflip backside 180. Interestingly, the page itself doesn’t say ‘ghetto bird’ on it anywhere, including the meta tags. And in fact, the hardflip late backside 180 has a lot of different names, like the Chetty Thomas. That name got popular for a little bit when Jimmy Carlin put out this flatland video where he did a bunch of obscure flatground tricks and renamed them all. It’s of course named after Chet Thomas, who did a ton of hardflip variations. You don’t hear that name very often anymore. It was mostly used by kids who didn’t realize that these trick names were just made up on the spot.

And for the longest time, I thought a hardflip late backside 180 is what a ghetto bird was… until I finally saw the original footage of Kareem Campbell doing it. Here it is.

He says he had the trick in mind for a while, and finally managed to do it because the atmosphere and energy were just right. He also said it’s the craziest thing he ever did in his life. So it definitely wasn’t his signature trick in the sense that he did it all the time. Actually, it seems like this is the only time he ever landed it. If any of you have ever seen him do it again, or a different camera angle, let me know. I’m going to have to throw in some clips of his Tony Hawk 2 special trick, because I don’t have much to work with, and it actually seems like they animated it really well, compared to the original footage.

Alright, the trick, it’s a nollie hardflip, late backside 180, right? Yeah, but keep in mind that the hardflip is already backside. So the trick is actually like a deconstructed nollie bigspin hardflip. Some people will get up in arms and say that it HAS TO be done fully in the air, and you can’t land in a pivot. But keep in mind, that while Kareem did it perfectly in the air, he only did it once, and that’s not really enough to go by for making firm rules about exactly how a trick has to be done.

Anyway, if the nollie version goes backside, then the regular version would have to be a late FRONTSIDE 180. A few skaters do these, but you’ll never see it called a ghetto bird for some reason.

But the original version was nollie, right?

Well this is actually a new issue. As skating gets more and more tech, we’re finally starting to outgrow some of the terminology we have available. For a while, we were using bigspin, biggerspin, and biggestspin. Now we just call those gazelles. Back in the 80s though, a gazelle was a 540 shove it with a 360 body rotation, and it was ONLY done off the nose. If you wanted to scoop it off the tail, you would have to say ‘gazelle off the tail’. But that’s kind of a mouthful. So nowadays, we strip out the stance and just keep the trick.

So, with the ghetto bird, maybe we ignore the nollie part, and just have frontside and backside ghetto birds? I don’t think there’s a technical problem with that, but it’s still such an unclear name, and I think it’s just time for that name to die out. I vote that we just say hardflip late 180. Or bigspin hardflip if it’s the other way. It seems like a lot of people are doing that already.