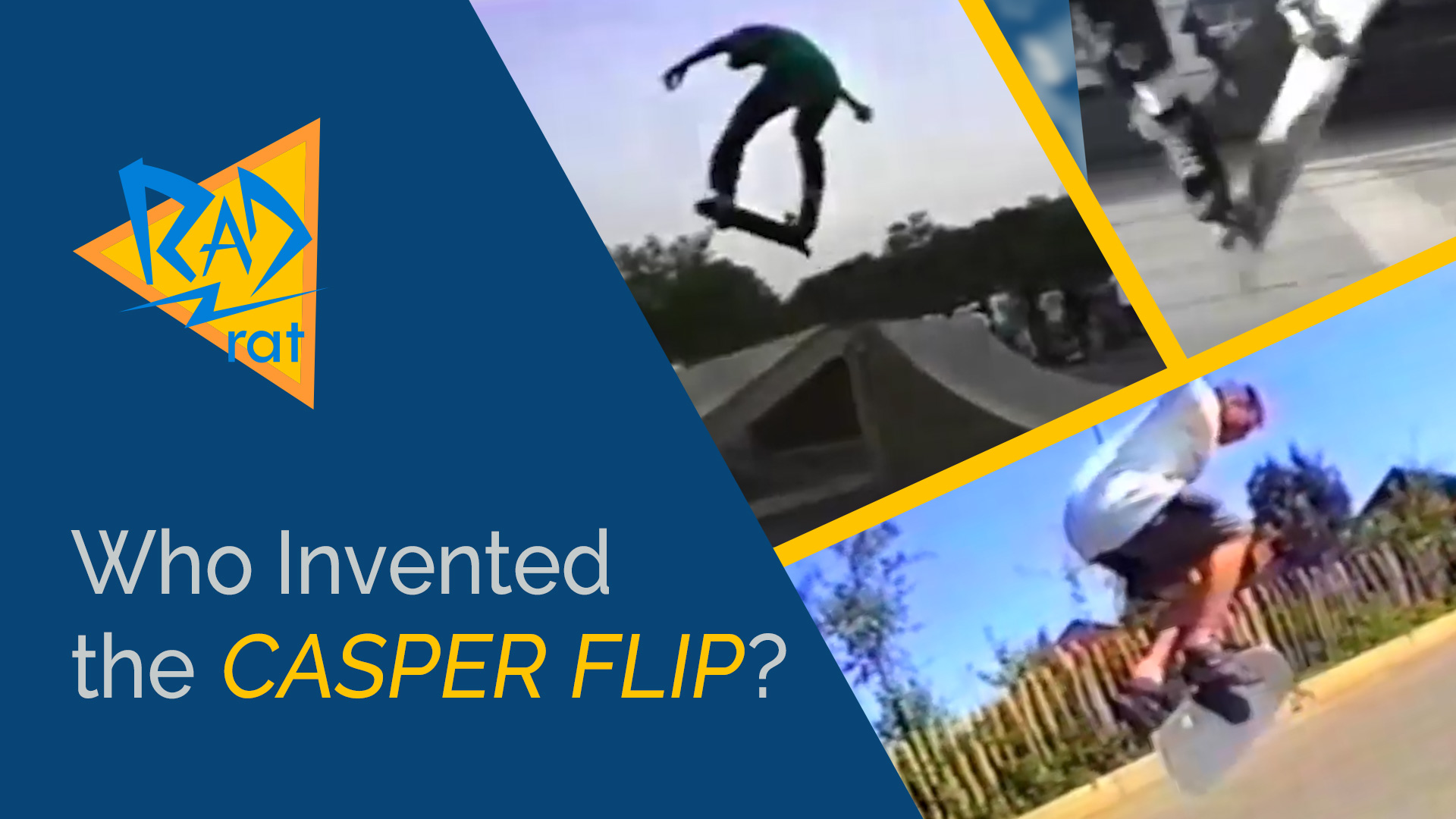 So what is a casper flip? For the sake of the video, it’s a half flip late vertical shove it, regardless of how exactly you do it. Some people will call the back footed versions casper flips and the front footed versions hospital flips. If you want to be really technical, you can use those names, but I just don’t think it really matters. I can only do casper flips regular and I can only do hospital flips switch. In fact, I made a Shred School video where I teach both of them in their respective stances. Check that out if you want to learn the trick.

But for this video, I’m just going to call them both casper flips. It’s the same trick, it’s just different techniques. We can argue that out in the comments if you want, but I don’t think it’s important.

Alright, so sometimes when I’m doing research for other videos, I’ll run into something interesting and I’ll make a note of it. Around 1989 and 90, I started seeing people doing these half kickbacks, which is kind of in the same vein as a casper flip. Chris Hall did some backside 180 ones, which is very similar to a casper flip body varial depending on how you want to think about it. But then I saw Alex Moul do some flatground casper flip variations in 1991, and Ed Templeton was doing them the same year. I know they knew each other at one point, so I thought that one might have invented it and taught the other. I reached out to both of them, and actually got a reply from Alex Moul. He told me he learned them from Ed in a Nike Air contest in Antwerp, Belgium. And he learned the 180 version the same day and people called that the Moul Grip. I did some research on that contest, and it was in July, 1991.

So where did Templeton learn them? I don’t know, because he wouldn’t answer me, even though he liked my Instagram post, but I have a theory. We’ll get to that in a second. But before that, I want to talk about Masahiro Fujii.

Someone in the comments on my Merlin Twist video (I’ll put your name right here) pointed out this video of Masahiro Fujii, but even though he never landed that on video, he was doing some crazy casper flip stuff around the same time as the other guys. He has a video labeled 1989 to 1991 where he does a few. It looks like a rip of some old tapes. It probably isn’t possible to be sure when it was recorded exactly.

I reached out to Masahiro, and guess what! He actually answered too. Here’s where things get a little weird though. He says he actually learned the trick after seeing Rodney Mullen do it in a video. But he had trouble doing it back footed so he had to do it with his front foot. So Masahiro might have been the first to do hospital flips, and a few of the variations, like alpha and beta flips. Bigspin or gazelle versions. He did one and a half flip caspers too.

But he said he saw Rodney Mullen do it first? It always comes back to that guy, doesn’t it? I’m not really surprised – he was doing 360 double flips and triple kickflips back in 88. But I figured this would be one trick that he didn’t actually invent. So I checked into it a little more and asked around.

Denis Sopovic, a freestyle skater, says he also remembers Mullen doing it around 1990.

Terry Synnott, a pro freestyler and the owner of the company who made my freestyle deck, he said a friend of his was doing them all the time in 1989. He’s not sure where he learned them, but I’d imagine it’s from that same Mullen footage.

So at this point, I think there’s some footage from around 1989 where Mullen does one. It had to be a video that got released worldwide, so it was probably a contest, right? I know it wasn’t in any of his video parts. But he only did things he was really consistent with in contests, and I’ve never seen him do a casper flip in a run. So just to be safe, I watched every video part, demo, practice session, contest run, and TV appearance from 1990 back to 1988. And even commercials! He did some stuff with Swatch watches back in the day. After all that, I came up empty.

I thought maybe it was a sequence in a magazine…? Rodney did a lot of trick tip columns back then. I read through every Transworld from 1990 and didn’t find it. I didn’t have access to other magazines or other years, except for a few here and there. It’s possible that it exists and I just didn’t see it.

Another option is that it was just bonus footage at the end of another video, or a guest spot in someone else’s part… I don’t know. If any of you have seen Rodney Mullen do a regular casper flip, please let me know.

He was obviously capable of doing the trick, and in 92, he did this one and a half flip version. It’s definitely believable that he invented it.

Do you guys remember that Plan B ad where it lists all the stuff he invented? It doesn’t say casper or hospital flip on it, but it does say that he invented stuff I’ve never seen footage of, like a varial heelflip in 88, or backside flips in 84… I don’t doubt that he did that stuff. His record speaks for itself, but it’s just a little hard to prove, despite the mountains of footage we have of him.

So who invented casper flips? It’s got to be Rodney Mullen. People who were skating back then remember it, despite me not being able to find the footage. But Masahiro Fujii deserves a lot of respect for landing some crazy variations first. And Ed Templeton did a lot to get them a little more mainstream, although they never caught on.

If any of you guys know more, let me know. I’d love to make an update to this with more information.

In my casper flip video, I talk about some mysterious footage from around 1989 or 90 of Rodney Mullen doing the trick. People remember seeing it, but it never surfaced. One of the guys who remembered it was Denis Sopovicz, and he might have found it. He sent me a link to the video called Turn the Other Cheek. It’s from 91 and it has contest footage from 90 and 91. Mullen is in it doing some flatland stuff, and here, in 91, he does a casper flip. It’s funny, I watched this video before, but I watch stuff on Skately, and this particular section of the video was blocked for copyright. Denis found it on Vimeo. It’s just funny. I’ve seen every video from 90 and 91, and only missed a handful of parts for copyright issues. And of course that’s where the clip is. This is from 91, and I thought it might have been 89 or 90… So I’m not sure this is the clip that everyone learned it from or not. But it at least proves he was doing them around that time.

1 thought on “Who Really Invented the CASPER FLIP? Are Casper and Hospital Flips the Same?”