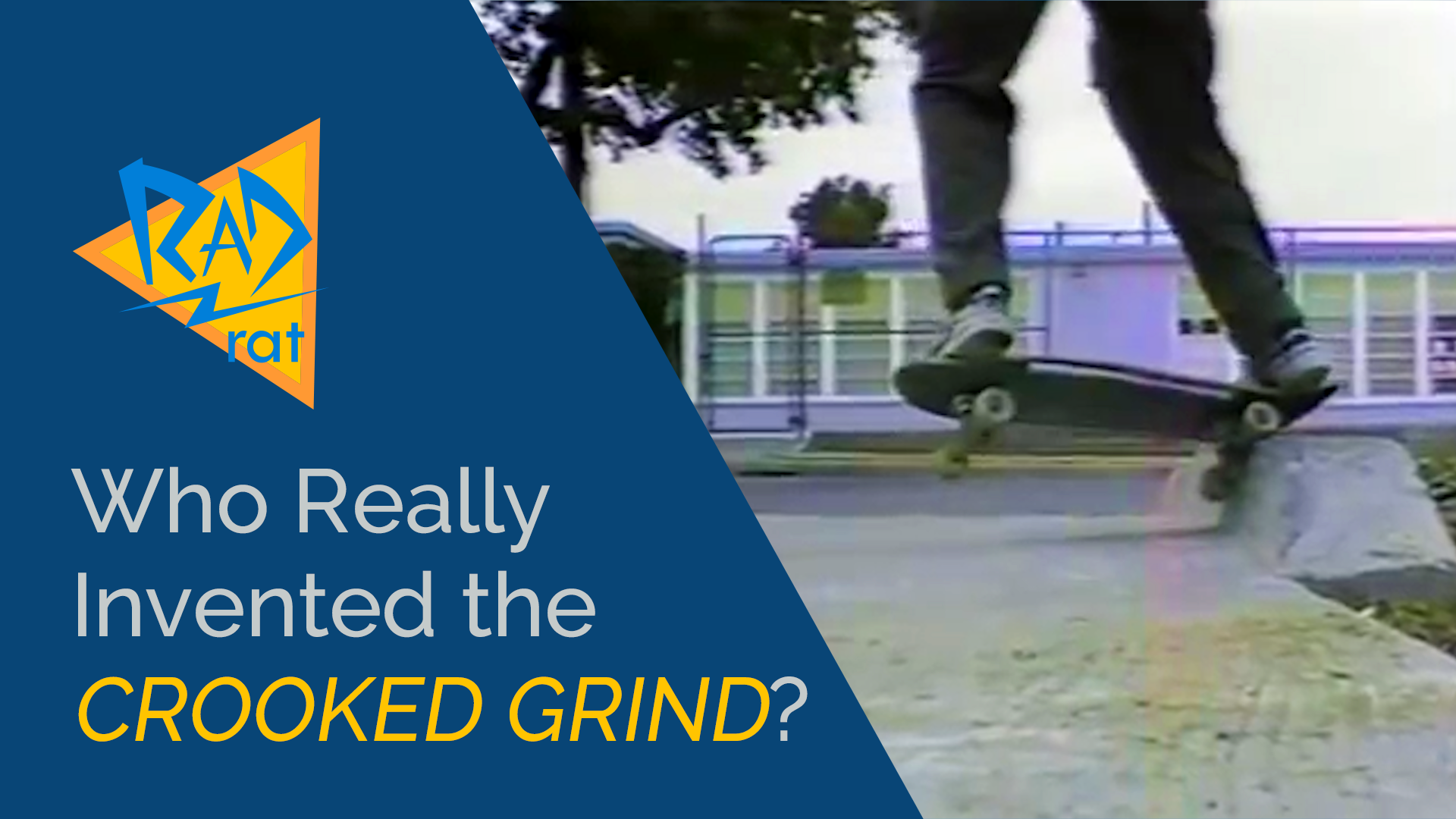 Crooked grinds, or K-grinds, are one of my favorite skateboard tricks. And everyone knows,even Wikipedia, that Eric Koston created them, right? Well Eric Koston actually wasn’t the first person to land the trick. So who was? And how did they get to be so linked to Koston? Let’s take a look.

So, real quick, a crooked grind is an angled nosegrind where the nose is also sliding. I made a trick tip for it about 6 years ago if you want to learn more about the trick itself and how it works.

Crooked grinds are one of the most popular skateboarding tricks these days, but where did it come from?

We can get a little insight from a Transworld article. Back in 1991, Wade Speyer did the first recorded trick at the Hubba Hideout, a backside nosegrind. Let’s take a look at it.

It’s kind of angled, although the nose isn’t locked in like a regular crooked grind. The article has a pretty interesting footnote though. It says, “Way back in 1991, Wade’s crooked grind was actually called a nosegrind. Shortly thereafter, Dan Peterka coined tweaked (crooked) nosegrinds as the crooked grind. People also called ’em K grinds because Koston made them largely popular, too. For simplicity’s sake, let’s call Wade’s a trick for the record books.”

So does this count as a crooks? Yeah, I would say so, but only retroactively. That wasn’t even a thing at the time. The interesting thing to notice is that he was probably going for a nosegrind, but since the ledge is so high, he didn’t have time to straighten out in the air. So who’s the first person to do what we would call a crooked grind? There’s really no way to know. For example, does this count? This is from Shackle Me Not, the H-Street video from 1988. At this point, their boards didn’t even have noses yet. So this is actually a switch slappy crooked grind, or a fakie crooked 5-0. I’m not sure what they would have called it back then. And this is a montage, so I’m not sure who it is. Maybe Jeff Pettitt.

But that Transworld article, and also Danny Gonzalez, who was writing for Jenkem magazine, they give credit to Dan Peterka for the name “crooked grind”. He also seems to be the first guy who started doing them clearly on purpose, locking into them instead of just doing a nosegrind that floats around a little. Here he is in H-Street’s video “Next Generation”, doing a couple different variations.

At this point, it’s pretty clear that Koston wasn’t involved in inventing the trick, because his first video part wasn’t even out for another year. Maybe he was one of the first guys doing it, but there’s no way he invented it.

So why does his name keep getting thrown around so much as the inventor? The Transworld article pins it when it says that he made them more popular.

See, Dan Peterka fell out of the pro skateboarding pretty soon after that video clip from earlier. His sponsor, H-Street, they closed, and he switched focus to pursue snowboarding instead. So he wasn’t really around long enough to make the trick famous.

Eric Koston hit the scene around 1992. He actually had 3 video parts that year, and you can see him doing some crooked grind variations in there. And not too long after he came out, he started getting hugely popular in ads, videos, contests, magazines, everything. And crooked grinds were one of the tricks he started to do. All eyes were on him, and he was doing a new trick, so people started calling them K-Grinds.

As far as I know, he never took credit for them, and people in the scene back then knew he didn’t create them, but over time, all those details got a bit fuzzy. Dan Peterka isn’t a household name for skaters. But he still deserves the credit for this trick.