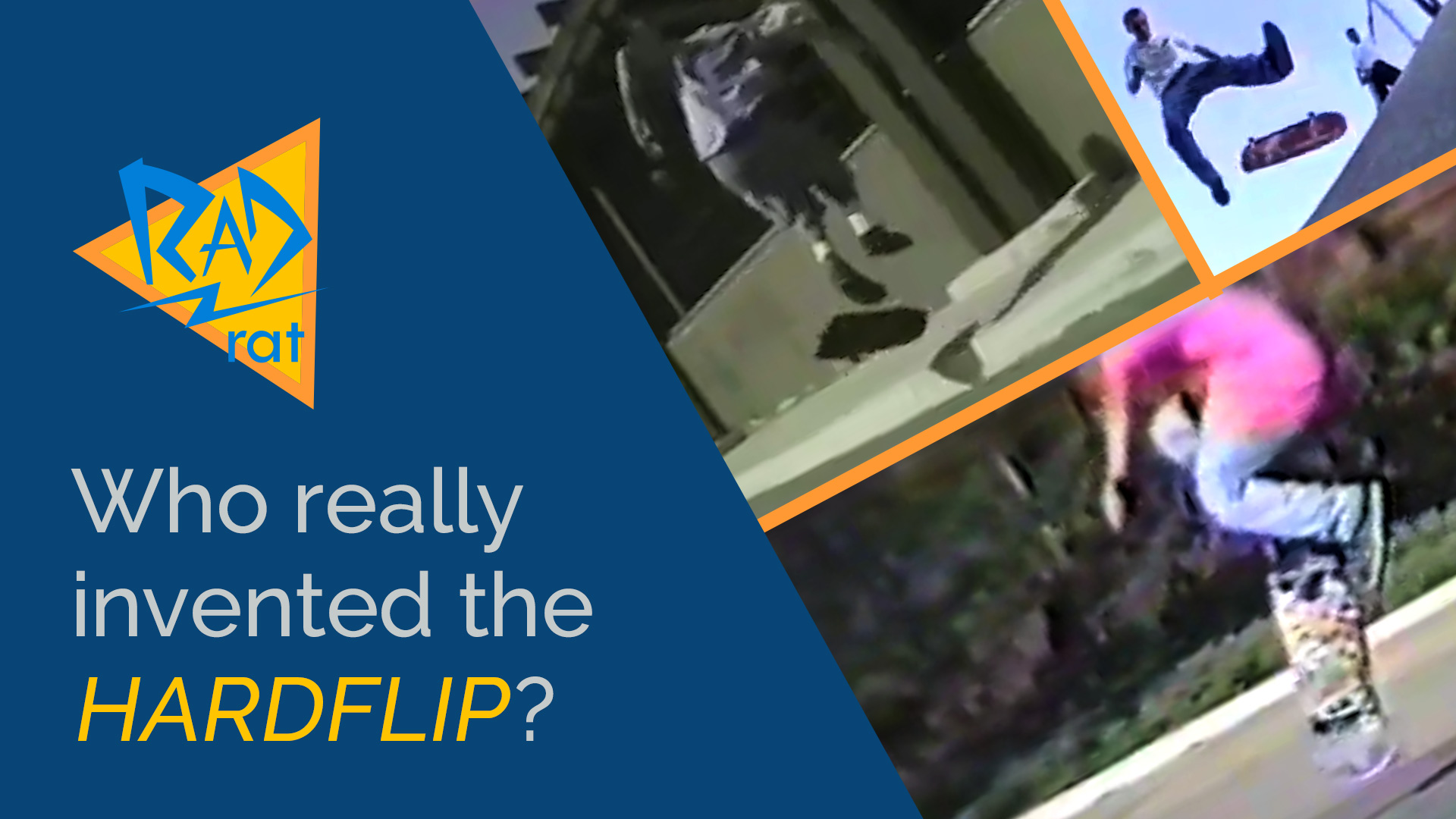 If you look up who invented hardflips, you’ll get a lot of results that basically say that nobody knows. Some people will say Daewon, and some will say Mullen, but they’re all wrong. Let’s take a look.

Back in the 1992 video “Love Child”, Daewon Song landed the first ever RECORDED hardflip. Eric Koston followed up later that same year with the first recorded switch one. But where did the trick actually come from?

In an episode of Epicly Later’d, Daewon talks about a kid named Dan Gallagher, and how he might have been the first one. He’s talking a lot of trash about it, but I think he’s just messing around.

There’s also a Transworld article with a quote from Rodney Mullen, where he says, “At the time (1991), Dan was as technical as anybody I’d ever seen. He was the guy who made up hardflips—the first person I’d seen do a nollie hardflip and double nollie flips when nobody else could.”

If Rodney Mullen said he was first, I’ve gotta take his word for it. Nobody knows as much about technical skating and flip tricks as that guy. But who is Dan Gallagher?

Dan was a very little-known skater. He was in one video called Ground Rules in 1991, around the time he invented the hardflip, but it’s not actually in the video. You can see some of the crazy stuff he was doing though. He was probably the first to do a nollie 360 flip. He says he met Rodney Mullen and showed him that trick, and that’s how they became friends.

It blows my mind that people were doing nollie 360 flips, front foot impossibles and all this really difficult stuff, but nobody had thought of the hardflip yet. People were doing varial flips already of course, and frontside flips since at least 1989. And yet, nobody put that together.

So this is Dan’s story. He used to do nollie backside 360 shove its a lot. It’s originally a freestyle trick. People had been doing 540 and even 720 versions for years.

But in the late 80s, people were starting to take the trick to street, and even getting a little bit of pop… but not much.

So Dan was doing this trick a lot and started to imagine throwing a kickflip in there… which would actually be a nollie 360 hardflip. He could do nollie 360 flips and figured it just HAD to be possible to do it the other way. Eventually, he kind of gave up on landing it and settled for the 180 version – what we would call a nollie hardflip.

He learned them nollie, then switch, then regular, then fakie, and even started experimenting with landing in pivots and things like that. By the time Daewon recorded the first one, Dan had already done it in every stance.

OK, so what about the name ‘hardflip’? Dan says that he would have to tell people: “‘It’s a 180 Varial Kickflip…but frontside…the hard way’ and eventually I just called it the the Hardflip because I got sick of explaining it.”

Now I’ve made a few videos about hardflips and hardflip related tricks before, and I’m always surprised to see people argue that hardflips are always vertical, and there’s a such trick as an ‘inward kickflip’. “A hardflip can’t be flat, or it doesn’t count.” Honestly, I thought that argument died out years ago, before the internet. Dan’s story about the name of the trick makes it obvious how it started out. A frontside varial kickflip. A hard way varial kickflip. Or a hard __ __ flip.

Anyway, it took a while for the name to catch on.

In 92 and 93, Big Brother magazine had some interesting captions for tricks. Here’s Daewon doing a hardflip tailslide. It calls it a ‘frontside varial kickflip tailslide.’ Not technically wrong, but obviously the name hadn’t gotten too far yet. The next year, in 93, Rob Dyrdek did a backside bigspin heelflip on a bank, or a backside inward heel. The caption calls it a ‘backside hardflip.’ That’s pretty interesting… they kind of interpreted ‘hardflip’ as meaning ‘the hard way’ in general, sort of like alley oop for body rotations.

If you ever want a laugh, read some of the early 90s skate magazines and check out the trick names. They’re all over the place. One issue, an inward heel is called a backside hardflip, but in the next it’s called an ‘inside heelflip.’ Nobody really knew what was going on because all this stuff was brand new.

Not too long after that, hardflips were starting to catch on, and there needed to be a standard name for people to use, and it ended up being ‘hardflip’.

So what do you think about Dan’s story? Now, of course, skateboarding is global. Some unknown guy in the Philippines might have done a hardflip in 1985 for all we know. But, to me, I think it checks out. Rodney Mullen said he invented it, and he was doing a ton of advanced nollie stuff at the time. Even without footage, I think it’s safe to say that he did actually land it first.

Now as far as all the details are concerned, like how he did it in every stance before anybody else, and how the name actually came from him too… well that’s all unprovable. I don’t know. I tend to believe him, but you never really know.

That’s all for this time. What other tricks would you like to see me explore? Do you know of any other unknown trick inventors? Any unsung heroes who deserve some attention? Let me know in the comments.

I updated this article twice. Here are the updates!