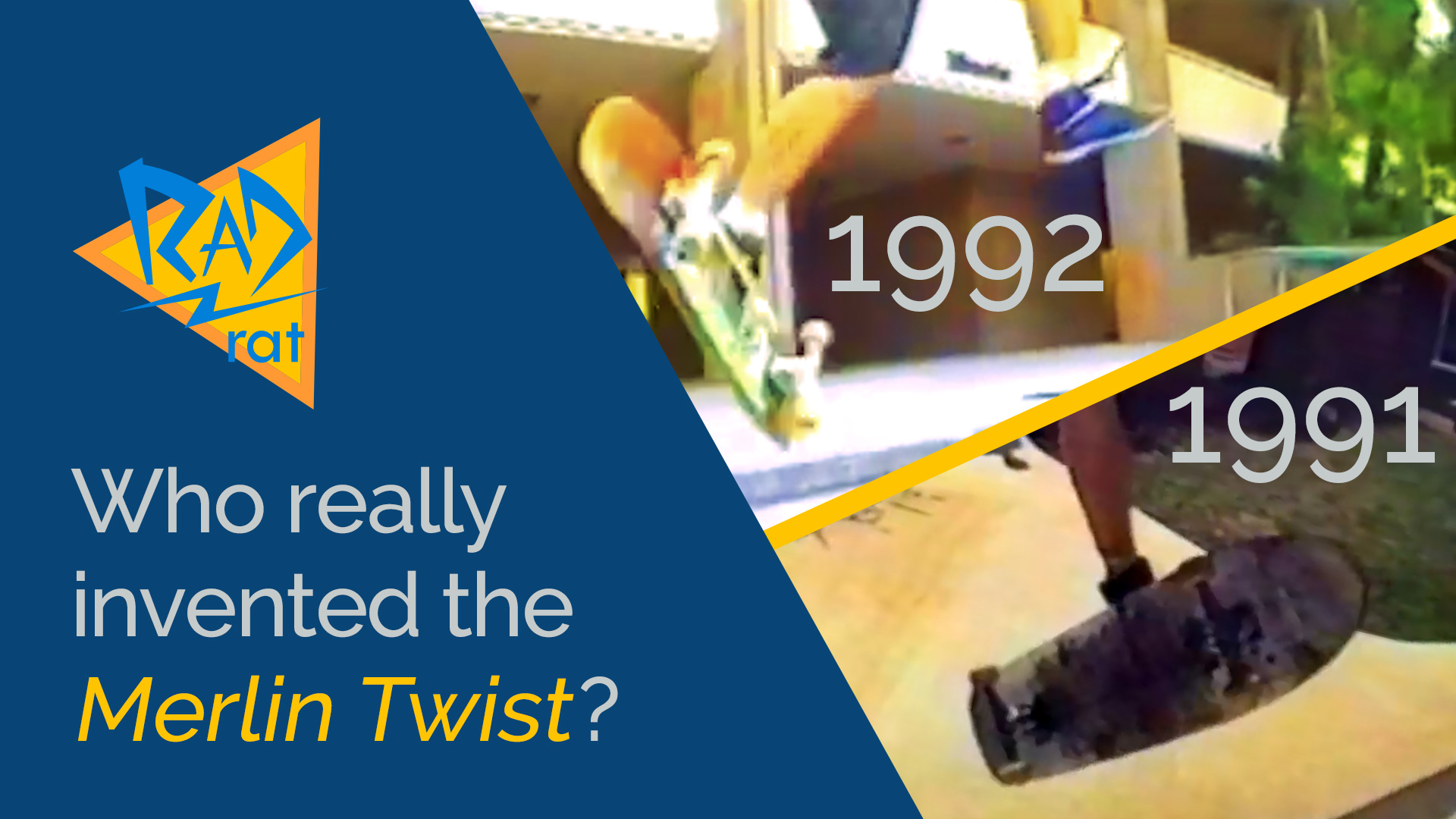 In July 2010, a brand new trick exploded onto the internet called the Merlin Twist. Corey Kennedy did a switch frontside 180 front foot impossible, which is a remarkable trick, and had never before been done… or had it? Actually, this trick was actually relatively common 25 years ago. Let’s take a look at the history of the Merlin Twist.

OK, first of all, let’s define what exactly a Merlin Twist is. In the videos, you can clearly see it’s a frontside 180 with a front foot impossible. A lot of people will jump in and say that it has to be switch, or it doesn’t count. But requiring a trick to be switch is kind of ridiculous. What if you call it if you do it in your normal stance? Do you call it switch… switch? And therefore regular?

I mean, the name Merlin Twist is already ridiculous enough as it is, so for the sake of argument, I’m going to say that the Merlin Twist is just in your regular stance. A lot of people find front foot impossibles easier switch anyway, because you can wrap it just like a normal impossible, with what would usually be your back foot. And with certain tricks like this, it doesn’t really matter that it’s switch, because they find it easier in that stance. Like varial heels, laser flips. That’s just how it is. It’s not that big of a deal.

OK, with that out of the way, let’s try to figure out who invented it.

Our first candidate is Ocean Howell. Now here he is in 1990. At the time, he’s mostly doing tech curb stuff that everyone was into. He was also skating a big board, but he was still throwing front foot impossibles. Alright, let’s see what he’s got. Oh… that was pretty close, but that’s actually just a bigspin. Let’s look at his next video part in 1992.

Wow. That is unquestionably a 180 front foot impossible. Maybe the best one I’ve ever seen. Sure, he needed a couple stairs to get the airtime, but look at that board! It still has rails on it, and it’s probably 9 inches wide. OK, so let’s put Ocean Howell down for 1992.

Now another name that gets thrown around as the inventor of the trick is John Montesi. Here he is in the 1991 New Deal video. Let’s take a look… Looks like that one was just a bigspin, again. I watched his other video parts just to make sure, and it looks like he never did the whole trick, at least not on video.

Now the next candidate is probably the most promising one – Alex Moul. If you haven’t seen any of his early footage, you need to check it out. He was doing the most crazy stuff when he was 16, like possibly inventing the casper flip. Ed Templeton was doing them at the same time, but he wasn’t doing them with a 180. I’ll dig deeper into that for a future video.

Anyway, front foot impossible variations are one of Alex’s signature tricks. You’ll see at least one in every video part he made. Even the 180 version is relatively common in his video parts – like these from 2005. But the question is – when did he do it first?

Well, to beat Ocean Howell, he better have done it in 1991, so let’s look at the 1991 video called 540. Here he is doing an endlessly long miniramp line. You couldn’t have a video at the time without tons of miniramp action. So most of this stuff is pretty unremarkable, but then he does… Wait, was that actually it? It sure looks like it. But don’t worry, because in case you didn’t catch it, he does it again in the same line. Yep, no doubt about it, that’s a frontside 180 front foot impossible being done 25 years ago in 1991.

Here’s the thing about NBDs – I see people claiming to be the first person to ever land something, usually on Instagram. But until you’ve seen Da Deal is Dead, 1281, Questionable, The Storm, and other early 90s skate videos, you really don’t know that. There’s a good chance that that trick was already done while you were in diapers.

Now in this case, I don’t think Corey Kennedy ever claimed to invent the trick, he just gave it a name. But the thing is, once he did, the trick suddenly became popular and people started doing it all over the world.

If you want to be ahead of the game and start the next trend, just look back to the 90s. Do a feather flip like Julio De La Cruz.