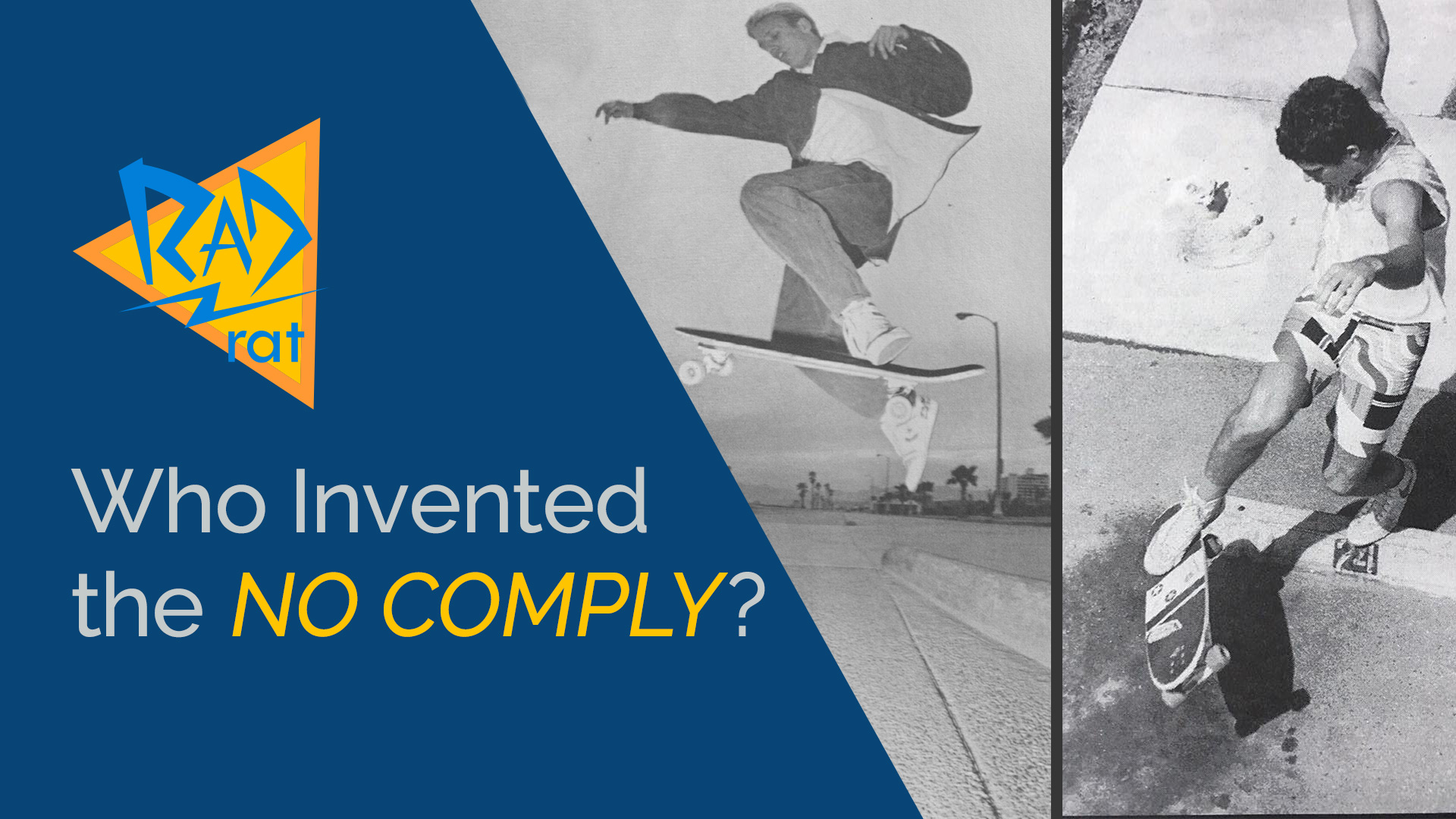 There are a lot of different stories about the origins of the no comply. I’m not sure there will be a way to completely prove one way or another, but we’ll do our best to get to the bottom of it. They’re often credited to John Lucero and/or Lance Mountain, and we’ll get there, but I want to take a quick detour and talk about some other options first.

Tommy Guerrero has a Youtube show called “BS with TG”. He has guests on there and they talk about the old days and stuff like that. On this one, called Beta 2, he has his old friend Rob Kamm, or ‘Orb’ on the show. And they talk about the trick called the 43 – which is a no comply frontside 180 on flat. The name of this trick is actually kind of funny. You can watch that video for the full story. But basically there was this convenience store that Orb would prank call back in the day, and just ask him for random things and how much they cost, including stuff that he wouldn’t possibly carry. And he noticed that a can of pop would cost 43 cents, when the average at the time was 40 cents. So he got it in his head that 43 was a conspiracy or some kind of magic number, and he kind of got latched onto it. And it kind of became his catchphrase. Later, he started doing no comply 180s, and just saying ‘43’ a lot, and it became the name of the trick.

Now, he says he didn’t invent this, and he was doing them in the late 70s. A recent Transworld article quotes him as doing it around 1982 though. That 40 cent Coke price would fit into that timeline. I tried to fact check it, and I found that they averaged 35 cents in 1977, so it all fits.

Another interesting story I saw was on reddit. This is from a guy who was around back then called nogooder. He says there was a Transworld photographer named Otis – or O. He was a really big dude, so big that he pretty much couldn’t jump. So he had a lot of “O tricks”, which were things like stepping off the board, flipping it over and jumping back on. All kinds of stuff that didn’t require both feet in the air at the same time. The story is, he invented no complies, and even named them, but he wasn’t landing with both feet at the same time. And since he was one of the only major skate photographers at the time in the early 80s, he was traveling around and meeting skaters all over the place, and planting this no comply idea in their heads. Eventually, other people started doing more legitimate variations, and it goes from there. Interestingly, Transworld mentions him briefly in an article as ‘O’, saying that he might have helped.

The main story you’ll find if you look it up is that it was invented by John Lucero, or maybe even Lance Mountain, then named by Neil Blender.

So this is Lucero’s story:

The no comply originated right after the boneless first came out. The boneless was a trick that once you learned it, you could adapt it to all sort of things from vertical to street skating. That trick just kind of opened up street skating. When you are doing a boneless, obviously your front foot is on the ground and you’re flying through the air, but I figured out how to do it off a curb without grabbing on to the board. I learned how to do a boneless bonk off a parking block, and that’s what I was kind of making fun of – the boneless without any hands.
We were doing these no grab bonelesses off of this parking lot block, and Neil [Blender] was with me and we we’re laughing and he’s like “I don’t understand it, I don’t understand, it’s stupid. No comply,” that’s how the name came about, we called it no comply for no understanding, that’s all it means. No comply means, “no one understands, no comprende.” It didn’t make sense how it worked. I also used to call them curb smashers. It started off as a joke and then Neil ended up being in an ad doing one and it started taking off from there.

One important thing to pick out there is that it was done off of a curb or parking block. Nowadays we don’t really make the distinction between flat and up a curb, but they do feel quite a bit different.

So let’s try to pin down a date for all of this. He said it was right after the boneless. Transworld says bonelesses came out in 1980. In Thrasher from February 1983, there’s a definition of Boneless One. So it was still early enough at that point that it needed to be defined, so I’m not completely sure. As for the no comply itself, Transworld puts a guess of 82 or 83 out there, which seems reasonable.

He mentions a Neil Blender ad where he does one. He’s talking about ‘Skate Fate ‘Zine’ from 1983. I wasn’t able to track it down, but THIS might be the picture that was used. Also, there’s this sequence in September 1984, which it calls a step-pop. Lance Mountain did them in 84 on video as well.

So the curb-style no comply was invented around 82 or 83. The flatground frontside 180, or the ‘43’, was around that same time as well.

But although the trick existed, they didn’t really take off for a couple more years.

In 86, Randy Smith was doing straight no complies on flat. Ray Barbee says, “I learned the straight ones from Randy Smith. He’d just go, boom, and boink it off his knee. He’d jump up and I swear he’d catch it knee high. He’d do it onto benches to grind.”

Flat ground variations at this point were called ‘step-hops’. Not to be confused with the ‘step-pop’, which seems to just be a one-off caption for that no comply.

In 88, Natas Kaupas made two trick tips – one in Thrasher, and one in the video Street Skating With Rob and Natas. This is when you see the trick really take off, but they’re only cool for a couple of years. Once you hit around 1990 or so, you don’t really see them in pro videos anymore. Maybe as a quick throwaway trick at the end of a line, but even then, not often at all. They became uncool pretty quickly. It’s interesting that they’re remembered so fondly these days compared to other tricks that fell off quickly like that. When you think ‘old school’, you think ‘no complies’, but think about pressure flips. They became uncool overnight and are still unpopular, 25 years later. But no complies are trendy and interesting again. That’s just how it goes sometimes I guess.

OK, so let’s summarize here. The ‘no comply’ is always done off of a curb or parking block. It was invented around 82 or 83.

Flatground no comply variations can be traced back to Orb as far back as 82, but potentially further than that with guys like O. Any flatground tricks outside of a plain 180 become known as a step-hop trick.

These days, everyone calls all of that stuff ‘no comply’. And I think that’s a good thing. It’s kind of a mess trying to keep it all straight.