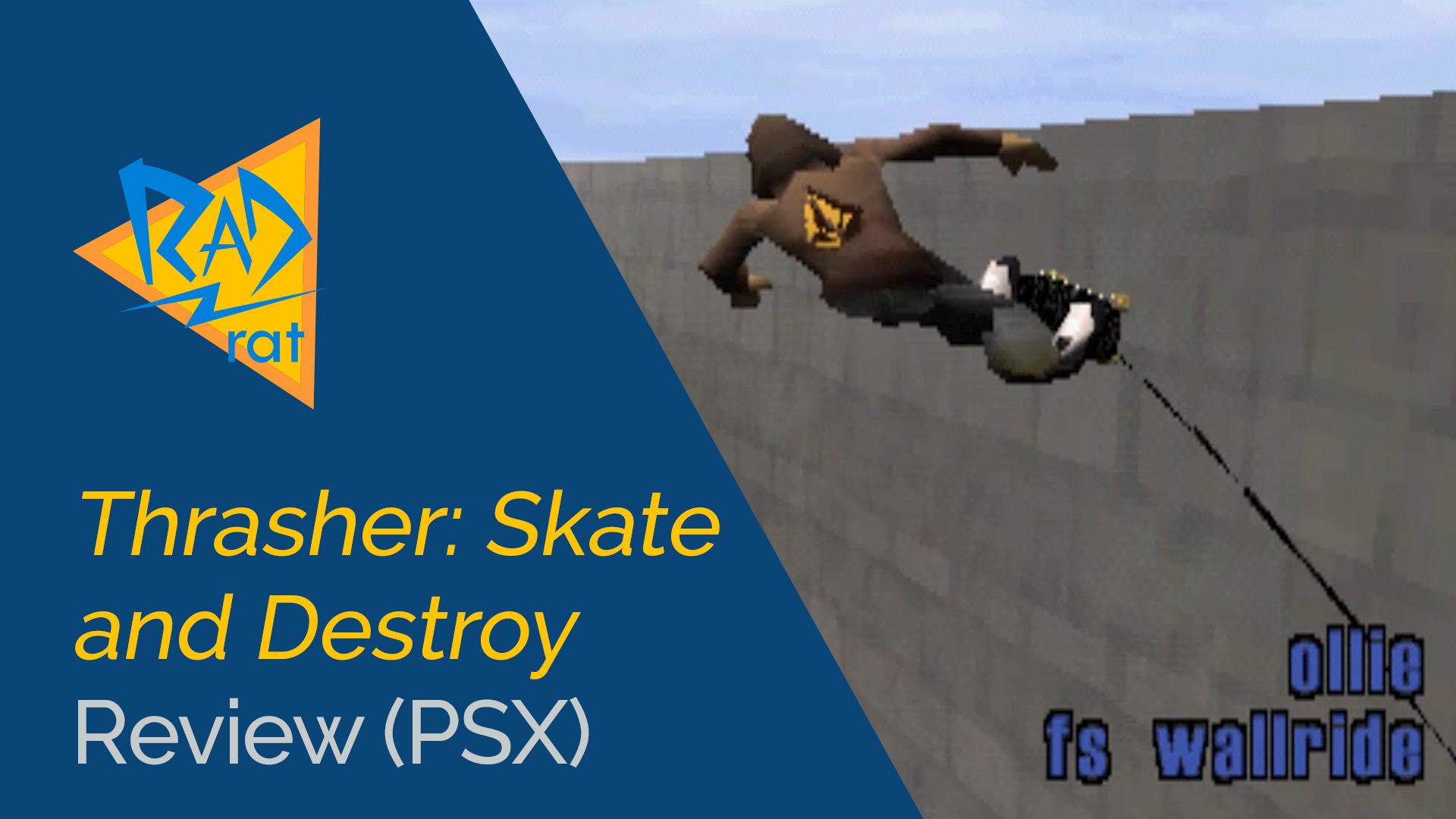 Long before there was Skate, there was Thrasher, the most realistic skateboarding sim of the PlayStation era. I loved this game back in the day, but does it still hold up? Let’s take a look and find out.

Thrasher: Skate and Destroy came out in September 1999, about a month after Tony Hawk 1 hit the shelves. Because it was so early, it’s completely free of influence from the Pro Skater series, which is something that hardly any other game can say. This is obvious the second you pick up the controller.

Thrasher is a straight up skateboarding sim. It’s more realistic than any other skateboarding game ever made. It’s got the obvious stuff, like grind physics that actually feel like grinds, but it’s also got something you don’t see in other games: you have to learn tricks. I’m not talking about special tricks… You start the game with kickflips, heelflips, shove its and 360 shoves. And the nollie versions of them. You learn varial flips, 360 flips, method grabs, wallrides and stuff like that as you complete levels. And just look at that wallride! It’s the most satisfying wallride in a video game.

Just because you learned a trick in normal stance doesn’t mean you can do it nollie. You actually unlock regular and nollie tricks separately, and it’s up to you to keep track of it all. This helps cut down on button-mashing combos. It you try to do a trick that you didn’t learn yet, you don’t just do something else, you do nothing.

Everything is assigned a button, even rotations. You can turn in the air to make sure you land straight, but if you do a 180 like that, it doesn’t count it. You have to actually hit the 180 button. Although this further limits the amount of tricks in the game, it makes sense from a realism standpoint. Just because you can do a 360 flip doesn’t mean that you can do it during a McTwist on vert, right? So instead of doing a 180 and a varial flip, for example, you can actually do a bigspin flip as a separate trick. Backside heelflips, half cab flips and stuff like that are the same way.

The controls work a lot different from any other skateboarding game. You push with x, which is also your grind button. Circle is the spin button, square is the ollie button, triangle is the flip button, and you can use the shoulder buttons for modifiers. Unlike in Tony Hawk, you don’t ollie, and then do a trick. You actually set up for the trick. For example, hold triangle, then hold left and you’ll do a heelflip. The screen tells you what you have lined up.

But here’s the thing. Putting in directions on the d-pad will make you turn. So you actually have to plan ahead, and come at the ledge at an angle, knowing that you’ll turn a little at the last second. This kind of seems like bad design, but I think it was on purpose. Every skater knows that real tricks don’t all work the same, especially spinning ones. You wouldn’t approach a ledge the same way for a frontside shove to back 50-50 as you would a backside shove to back 50-50. This means that you actually need to know your tricks and how they react. Even in Skate, where you need to certain level of skill to do the right trick, they’re still all the same. You can do any flip trick at the same angle and still land in a grind the same way.

For the career mode, you have a few skaters to choose from, and they all have different stats. You can never upgrade these stats, so it’s important to plan for what kind of skating you’ll do. I usually go with one of the tech guys, because you get more points doing tech ledge combos than you do by doing big gaps.

The game works like Skate, where it tries to determine how big a gap was, and it will give you points for things that are “risky”, “big air” all the way up to “suicidal”. It’s just that getting those extra points is a little less predictable and it’s more fun to do tech stuff anyway. But if you skate with a tech skater, there are some gaps you’ll never be able to do.

There are 2 different types of levels, street and contest.

In the street levels, you’re given a score total that you need to beat. That’s it. There’s nothing to collect, nothing to find or unlock – you just have to skate. It will penalize you for repeating tricks or staying in the same place too much. You can free skate for as long as you want, then hit the select button to start your run. To advance, you just need to get in a good run at that spot… And you need to avoid… the cop.

The timer isn’t just a random countdown for no reason like in Tony Hawk. In Thrasher, the countdown is for when the cops will show up. Or in Venice, the mugger. Or in San Francisco, the dog. You can exit the level at any time, but if you’re still skating when time runs out, the camera jumps back to the cop’s perspective, and you either have to lose him by getting really far away, or finding one of the level exits. If he catches you, you get tased, and you have to start the level over.

This is a good gameplay element because you get a three times multiplier if you do tricks while running away. If you didn’t quite reach the score you needed, you can gamble, and try to squeeze in some more tricks. But, it’s a lot harder to do that because the camera pulls back.

The other level type is contests. It’s basically the same, except you lose 500 points if you bail, and there’s no cop or dog or anything. It plays the same, and you can still exit your run early if you reach your score.

After every few levels, you’ll unlock sponsors, and you can change your outfit. It’s cool, but also really weird that you just pick the color from a menu instead of actually seeing the shirts first. But it’s probably trying to cut down on extra load time.

After you beat 11 levels, you get to Das Kolloseum, a contest that will turn you pro if you win. When you do, you also unlock an exclusive trick for your character. Then… it tells you to start over and go back and play again on hard mode. There are a few differences in hard mode, like the fact that there’s a landing button. Now you have to hit square before you land, or you’ll land really sketchy and start turning uncontrollably. If you run into something or roll off of a ledge, you’ll bail. This just makes it even more important to plan your tricks. If you throw a trick at a ledge and try to grind it, you better land on the coping, because you hit the grind button instead of the landing button, and you’ll bail if you miss.

The other change is that you have to hold a button down longer to do tricks higher. It’s a little tougher to flip into grinds and go up ledges if you don’t plan ahead.

So you get through the hard mode, turn pro, and then it tells you to go back AGAIN and destroy every level, and shoot cover shots for Thrasher. This time, you don’t actually start over, you just go back and beat a new high score.

So far, the game has been pretty easy, but these new scores are a LOT higher. Some levels, like the L.A. River, suddenly become very tough. The banks on this level do nothing for you. It’s the same points as doing stuff on flat, so they basically just get in your way. And if you skate the same area too much, you get fewer points for every trick, so you end up just trying to do laps and throw a few tricks here and there. It will take you a few tries, and you’ll be happy when it’s over. The LA River also is the only level with poisonous sludge in it. If you roll through this mud at the bottom, it will cause damage to your board. If you fall in it, it’s pretty much guaranteed to make you lose the level. Big bails will rack up damage on your board too. Playing as a tech skater, this wasn’t a big issue for me, but it’s something to keep an eye out for.

Playing through every level a few times sounds repetitive, but playing the earlier levels takes one or two tries. You beat it quickly enough that you don’t really have time to get sick of them. It’s not like playing Tony Hawk and doing 5 runs trying to figure out where all the VB transfers are. And there are 12 levels that all look and feel pretty different, which is great. And when you destroy a location, you get to take a screenshot from your replay and put it on the cover of Thrasher. When you beat Das Kolloseum again, you become skater of the year!

Overall, this game is excellent in almost every way… Except for the load times. You’ll stare at this screen trying to figure out if this frontside flip is regular or fakie for minutes at a time while playing through the game. A few times, I was sure that the game froze. Luckily, in an original PlayStation, the disc reading is so loud that you know it’s at least doing something. I don’t know what it is about this game – maybe the type of disc, or how the data is physically laid out on it, but it’s like being next to a dot matrix printer the whole time. And it happens a lot. When you beat a level, it will load the save screen, then it will load the sponsor screen where you can edit your outfit. Then it will load the level select, then it will load the level. And if you beat the last level in an area, it will also load a really short video with some tricks in it. This is a cool thought, but the video quality is so bad that it’s unwatchable.

So your other options for playing this game to cut down on load times would be in a PS2 – which has Fast Disc Speed mode. But that requires you to still have a functioning system. PS3 is also an option… It will be quiet, but not noticeably faster.

Honestly, I think the best option is just emulating it. I usually don’t recommend that over the original version, but the load times are so bad that having save states is a real game changer.

Whatever method you choose, just make sure you play Thrasher. No, it’s not as polished as Skate, but it’s a great game, and there’s nothing else like it. Plus, I can guarantee you own a device somewhere capable of playing it.

That’s all for this review. Have you ever played Thrasher? How do you think it stacks up against other PlayStation era skateboard games? I think it’s the best skateboarding game of the time, although the Tony Hawk games were better GAMES in general, just with the different things you can unlock, and all the different modes, and the fun factor.