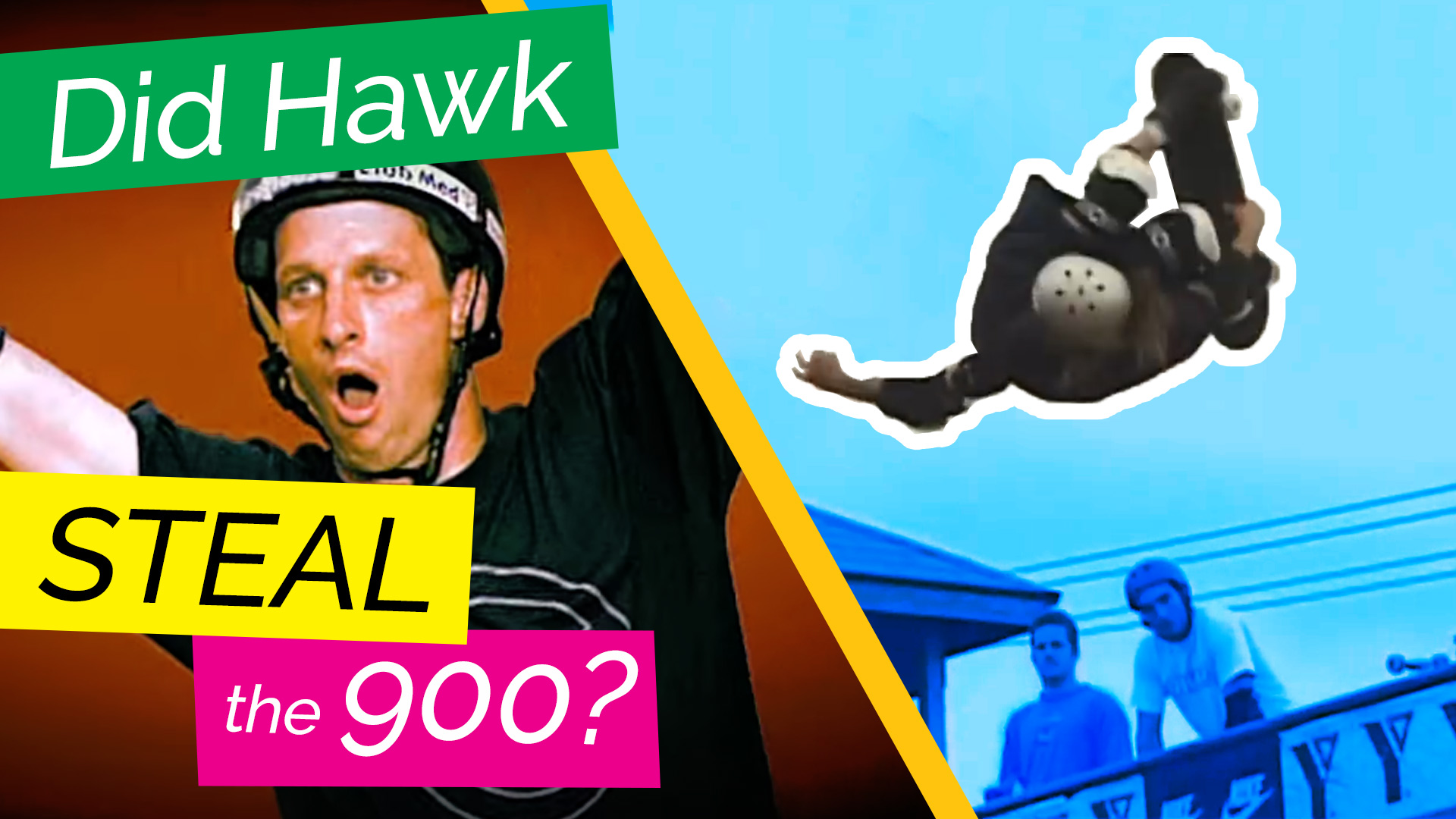 Back in 2014, Vice made a documentary about Tas Pappas called All This Mayhem, which is basically his life story.

It’s really about how he and his brother get caught up in drugs and how his brother tragically died. So it’s not really ABOUT Tony Hawk, but he does come up a lot, and the movie does make a lot of claims. He says Tony Hawk stole the 900 from him. At first glance, that sounds completely ridiculous. He doesn’t even deny that Hawk did it first, so how did he steal it? But when you watch the documentary, it kind of makes sense. I watched it on Netflix.

And if you don’t know about the Pappas brothers, they were really big for a while in the 90s. They were some of the first people really pushing flip tricks on vert, along with guys like Danny Way.

So the basic story here is that Pappas says Hawk got him banned from the best trick contest in 1999, which is when Hawk stepped in and did the 900. And the reason he got him kicked out was because he knew Pappas would probably do it first. So let’s take a look at the specifics here.

Tas says he was getting really close to the 900 leading up to the X Games that year, and he had a sequence published in Transworld. He was planning on trying it again at the X Games that year. Hawk must have studied his technique and figured out how to do it from there.

Let’s see what Tony has to say about that. He actually started them in ‘87 for a while, but didn’t get too close and started them again in 94 and 95. He mentions being inspired by Danny Way getting close in Risk It from 1990. This attempt was really close, but it’s super slow motion and it cuts way too fast. Pretty obvious that he didn’t roll away, but he at least put wheels down. So Way and Hawk were attempting it first, then Sluggo and Tas started getting close later. And Hawk says he was watching Sluggo closer because he was a gymnast. There was a sequence of Sluggo getting close too.

So yeah, Hawk was taking influence from others on how to do it, but Tas makes it sound like he was the only guy doing it, and that’s just not true. Tony put wheels down in 96 – 3 years before actually landing it. Plus, I don’t think taking inspiration from someone’s technique is the worst thing in the world anyway. Or else nobody other than mike mcgill would be allowed to do inverted 540s.

Anyway, not only were a few people trying 900s, but there were 900 challenge events in the 90s. I had never heard of these before. Apparently Globe sponsored a 900 challenge at ASR and there was another one in Australia. Globe was Tas’s sponsor, and the events were built for Tas to land the trick. But he never did. So it’s not like Tony overshadowed him and took his opportunity to do it. He was one of many who could have been first.

Next, he claims that he wasn’t allowed in the Best Trick contest, despite qualifying for every other one for the past couple years. Maybe Tony’s wife, who worked at ESPN, had something to do with it?

So Tony’s motive for doing this would be to get him out of the way and do the 900. Hawk says that he only went in planning to do a varial 720, but since he landed that with a lot of time left over, he decided on the spot to try the 9. He also says the announcer, Dave Duncan, egged him on and that’s what got him thinking about doing it. Of course, that’s just his word there. Let’s see how the rest of the facts line up.

Why wasn’t Tas invited to that Best Trick contest? Simply – he didn’t qualify. He was trying 900s at every event leading up to the X Games, but never landed it, meaning that he didn’t place in the event. So on paper, he just wasn’t qualified. Tas didn’t land a safety trick and then go big, he would only do the 9. This really makes a lot of sense to me.

I found an interview with Don Bostick, the guy who did event planning for the skateboard events back then. He said there was a committee of 5 people, and they picked the top 5 skaters for the event. Tas was 8th place that year. Sure, vert standings and best trick aren’t the same, but that’s how it looked on paper.

Maybe someone more in tune with skateboarding would have put him in there for the potential, but a huge event like the X Games is probably going to go with the black and white numbers and put in the people who are performing. ESPN made a lot of bad decisions back then. They paid people terribly. I’ve heard that even the winner would probably lose money paying for their own travel to the event that was more than the prize money. So it’s possible that Tas was kept out because of some marketing reason, but even if that’s the case, it doesn’t seem to have anything to do with Hawk.

But what about Hawk’s wife? Didn’t she work for ESPN? No, she didn’t. This is one of the more ridiculous parts of the whole thing. Hawk’s SECOND wife worked at ESPN, but that was years after this all happened. His first wife Erin actually just gave birth a few months before the event and was there with the baby Spencer. Now Tas doesn’t outright say that she had something to do with it, but he implies it. And the fact that this was left in the documentary really says something about the fact checking here. This is an obvious error and there’s really no excuse for it. So what other errors are there? Tony points out the fact that a lot of the big names that were approached to be in the documentary, like Danny Way, turned it down. Why did all these people get a bad feeling about it? Was it an obvious bias? Maybe.

Some of the guys at Globe didn’t want to be in the video, and they basically said they didn’t feel comfortable with the team. They were worried they’d use stuff out of context and build their own story instead of sticking to the facts.

There is a chance that Tony was a jerk to him in some way… Tas was supposedly kicked out of a few events by Hawk, long after this 900 stuff went down. But the thing is, Tas fully admits to being heavily into drugs back then, like crack. There’s a scene in the documentary where Tas has people chanting his name and he’s doing a product toss from a halfpipe… WHILE a contest run is currently going on that same ramp. He wasn’t even competing that day, and he was too stoned to care. So maybe Tony was a jerk and kicked him out of stuff, or maybe he kicked him out of stuff for a good reason… or maybe it didn’t happen at all.

But it’s clear that Tas really believes this stuff. Bostick, the event coordinator guy I mentioned earlier, he says that he remembers Tas staring him down after Hawk landed the 9. This is something he believed in the moment, not something he just made up as a sob story or anything.

Since the documentary came out, Tas hasn’t taken anything back, but he did say that he wished he hadn’t put that in there, because all the negative attention overshadowed the real story, which was about his brother. And Hawk too, initially he didn’t want to comment because he said the organization of a contest in the 90s wasn’t nearly as important as the death of Ben Pappas. He only addressed it because it wasn’t going away.

Also, since the doc came out, Tas actually landed a 900. On a megaramp though, which is surprising. He complained about mega ramps in the X Games and said they were only for privileged people. But either way, it’s cool to see him finally conquer this thing that’s been hanging over his head for 20 years.

What do you think about this? Is there any chance Tas actually has a real argument here? Is Tony Hawk a liar who’s really good at covering his tracks? I don’t think so, but if I’m wrong, let me know.