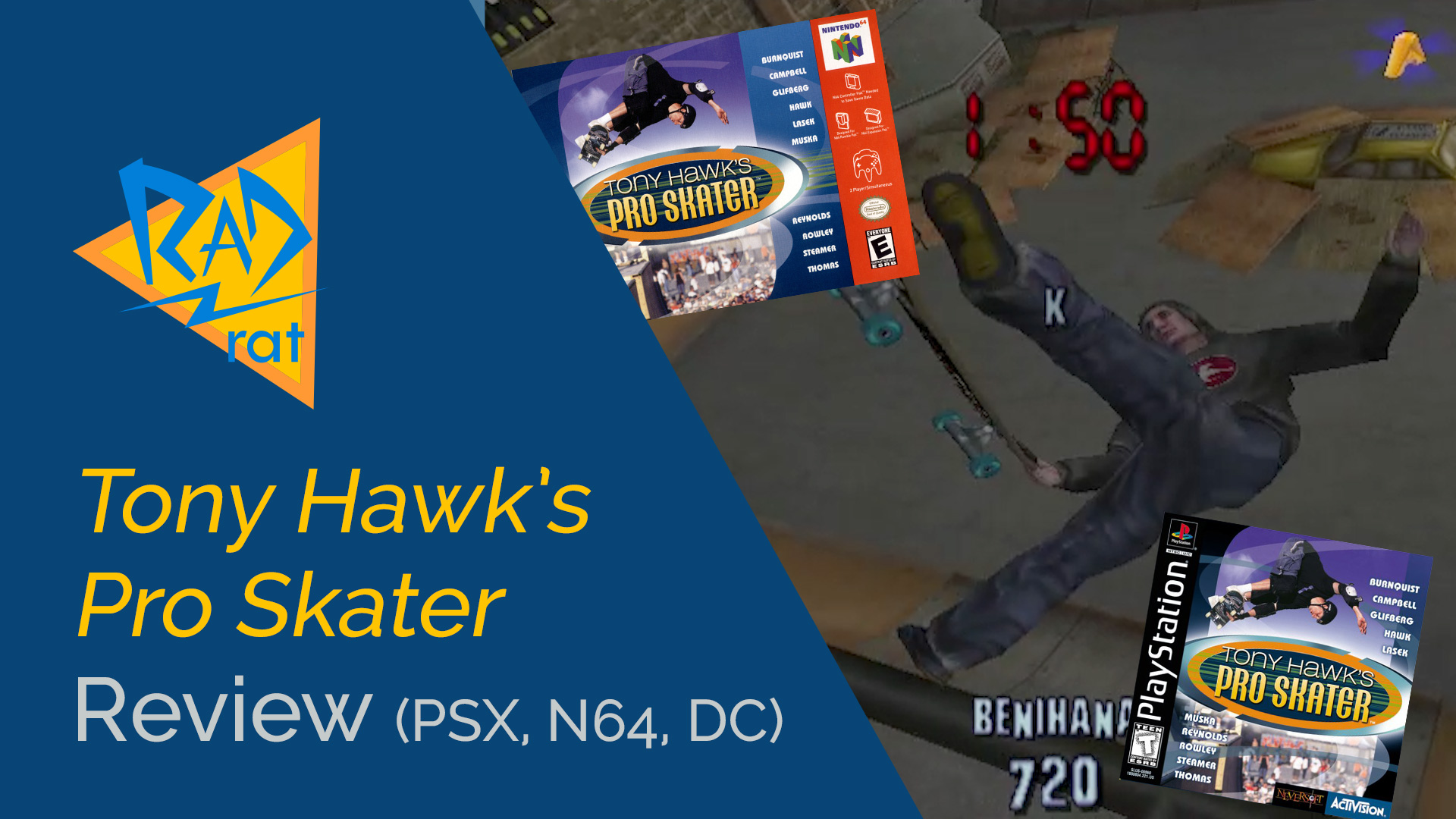 If you want to play Tony Hawk 1 these days, you’ve got 4 – more like 3.5 – choices. PS1, N64, Dreamcast, or Xbox. We can kind of rule out the Xbox version right away though. The career mode from Pro Skater 1 is included in Tony Hawk 2X, but you unlock it after you beat the Tony Hawk 2 career, meaning that your stats are really high when you start. And you can do manuals, which makes all of the score challenges way too easy. It’s cool to have as a bonus, but it’s not the best way to play Pro Skater 1.

Back in the day, the biggest debate was between the N64 and the Playstation. Load times versus soundtrack. The N64 version had to cut a lot of corners to fit onto a cartridge. They removed a lot of the songs or just the lyrics from the songs, and looped the ones that are left, and they removed FMV. That means no ending videos, and no video screens in the levels. A lot of the effects are missing too, like they way things interact when you skate them. They also removed the blood. But, the framerate is a bit more stable, the graphics are sharper, and the load times are much better.

Now, the Playstation version is the original, and it’s got a lot more content than the N64, but it’s also got the weird PS1 issues, like the texture glitching, so don’t forget about the Dreamcast. The Dreamcast version is identical to the PS1, except it looks a lot better. The only downside is that the game was designed for a PS1 controller. Personally, I stick to the Playstation, but that’s mostly for nostalgia. I’m going to use footage from every version and you can decide for yourself which one to try.

I’ll set the scene for you, it came out in August 1999. Bill Clinton was still President. ‘The Matrix’, ‘Fight Club’ and ‘The Phantom Menace’ were the big movies of that year. The X-Games just started the year before, and skateboarding was beginning to recover from the lull of the mid 90s. Street Sk8er 1 had come out already, but there still hadn’t been a major skateboarding game since the days of Skate or Die on the NES. All these games had some element of racing in them, and Pro Skater was the first one to be score and goal based.

Part of the reason this game felt so different is because of the tight collaboration with Tony Hawk. Planet Tony Hawk says, “With each new build of the game, he was given a copy to go through. If something didn’t feel true to skateboarding, or if it looked off, he would report back to Neversoft.” He was also involved in motion capture. This game had a lot of skateboarding clout behind it, and is the most authentic game possible at the time.

So if you’ve never played the original game, you may be in for a surprise. There are no manuals. At all. Playing it now, I kept hitting up-down when I landed everything. It takes a long time to get used to playing like that. Getting high scores is pretty hard because you can’t really count on getting a high multiplier. It’s all about just holding grabs really long and mixing up your tricks.This completely changes the gameplay.

There are also a few major differences in the controls. Instead of no complies and bonelesses, you have nollies and fastplants. The nollies are sort of an independent thing – and there’s a weird animation where you kind of do it with one foot. You nollie, and then just do your regular stance trick. They didn’t re-animate everything off the nose. AND, you can do switch nollies! You’d think that would be easy to fix, but there it is. There are also no double-tap tricks, like down down square for 360 flips. So you only have 8 flip tricks and 8 grabs.

The line between flip and grab is a little blurrier in this game. Kickflip indies, fingerflips, and other air tricks that have a flip in them are counted as flip tricks, even though you can hold them like a grab. I wasn’t used to not being able to do all my flip tricks on flat. In this game, you definitely need to know all your tricks and how long they take. They aren’t as interchangeable as they are in later games. So for that reason, it’s a little easier to play as a street skater instead of a vert one.

There are a couple more rough edges too, like not being able to land ‘perfect’ like in Tony Hawk 2. That’s always really satisfying and it felt weird that it was missing here. Also, when you come to a stop, it sometimes takes you forever to actually get going again. You don’t push, like like in other skateboarding games, so you just hold X and wait. Also, I can’t figure out where in the menu you can see your special tricks. Every time I did one, it was completely on accident. I could look it up in the manual, but I just didn’t bother.

Each of the 9 stages in Pro Skater 1 is very similar – you have 5 challenges, or ‘tapes’ that you need to unlock. Find SKATE, collect/destroy 5 more level-specific things, get a high score and get the secret tape.

So there are much fewer goals, and even fewer stats that you can’t edit. Those floating things in the levels? They aren’t stat points from Pro Skater 3, they aren’t cash icons from 2… They’re just extra points. That’s right, you have gaps that give you a bonus… and you also have point icons. It’s a little strange.

Just like the next couple games, there are also contests that you need to medal in. There’s nothing that should be too challenging for Tony Hawk pros out there, but the level design definitely gets in the way of any massive combos. In later games, you can wallride up to a grind on top of a wall, transfer over to a power cord, grind that to the other side of the level, transfer into a grind on a building, and just keep a combo going forever. But look at the Chicago level here – If you try that, you just run into a pole. Basically, just hit one rail, and it’s over.

In part, I think this is kind of cool. You know, starting around Pro Skater 4, the series started to try including more realistic places again, but the problem was that the physics don’t really let you skate stuff the way it is in real life. Like this street section in the Kona level. You just fly right over everything, and even grinding the whole box end to end is basically worthless. To get points, you end up just grinding power cables and bleachers and ignoring the actual ramps that were designed for skateboarding. In Tony Hawk 1, things were more simple. In the skatepark, you skate the ramps and rails designed for skateboarding. Isn’t that a crazy concept?

Something about Pro Skater 1 just feels more pure. There’s no Bam Margera, there’s no Free Ballin’, there’s no weird non-skating characters… it’s a skateboarding game. It’s not exactly realistic, especially the vert stuff. It’s a Tony Hawk game. You can do a 720 kickflip plus kickflip plus 360 flip. Still, I think it’s got a good balance.

But is the game worth playing today? Yeah. Well, at least, I think it’s interesting. And it really helps give perspective on the later games in the series and just helps you see how off-track they got. The less they were about skating and the more they were about… destroying property, pushing tourists in the water, knocking over kegs, feeding sea lions…. The worse the games got. But we’ll get to that later when I review those games.

The game is dirt cheap now, and I definitely think it’s worth having at least as a collectible.

That’s all for this one. Which Tony Hawk game was your favorite? I’m planning on reviewing the whole series eventually, but I want to cover them in order so I can bring up new features and stuff as they were introduced.