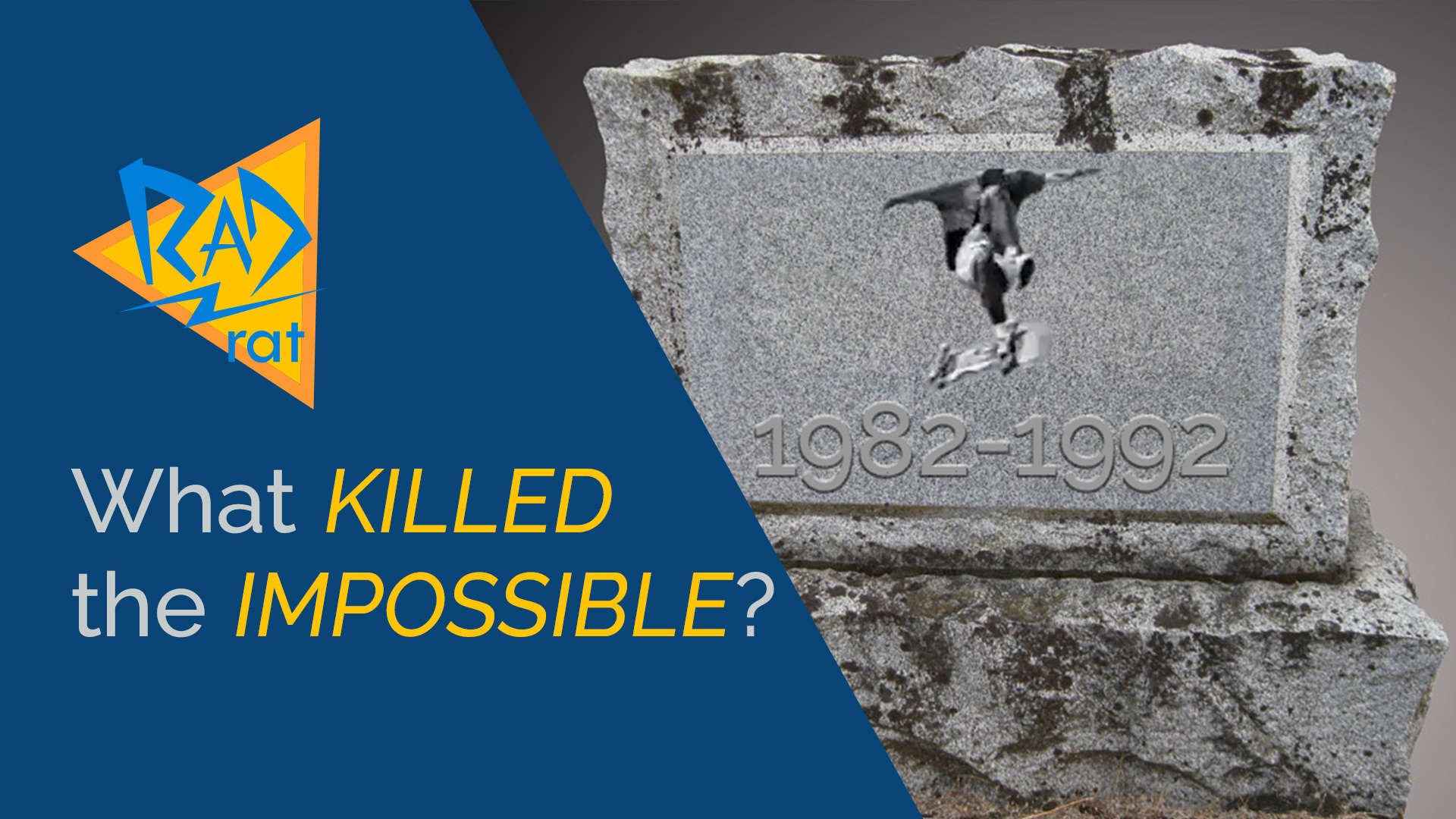 The impossible is one of the coolest tricks in skateboarding. It’s unique, stylish and a lot of fun to do. This is the story of the impossible, from rise to sudden fall in the 90s.

Just like most classic flip tricks, the impossible can be traced back to Rodney Mullen in the early 80s… but maybe not in the way you’d expect.

He says that he was in the car with some of the Bones Brigade guys, and they were talking about how a board tumbling forward in the air was impossible. Of course, an impossible as we know it flips backward, but regardless, it got the gears turning in his head. Mullen was out with an injury around that time, and he started playing around in the carpet, and figured out the wrap for the impossible. He says that he landed the first one a few days later when we started skating again. He doesn’t give a date for this, and there wasn’t a lot of footage from that time. The earliest we can say for sure is 82, but we’ll get to that in a second.

Here’s the thing. This impossible is not the trick that you’re used to. He was doing it with his hand, from tailstop position. He hadn’t even invented the Ollie yet. In 1982, Powell Peralta released this video, called “Skateboarding in the 80s”. It’s pretty rare. Only about 10 percent of households had VCRs in those days, so there probably wasn’t that big of a market for it. Anyway, he does an impossible in that video. Here’s what it looks like.

So it’s got the wrap, but it’s just thrown by hand instead of popped. These days, that trick is called a godzilla flip… not to be confused with a godzilla RAILflip, which is totally unrelated.

I’m sure a lot of you have seen lists of tricks that Mullen invented, and the dates never really make sense. This is why. Trick names changed, or one trick name might have applied to multiple tricks at different times. It was the wild west back then. Everyone was still figuring things out.

So a few months after Mullen started doing impossibles, he started hooking them with his foot instead of his hand. These days, we call that a nosehook impossible, for obvious reasons. But that name came later. In the 80s, Rodney Mullen had a trick tip column in Thrasher magazine. In January 84, he showed off the nosehook impossible, but it was simply called: the impossible trick.

He came up with a few variations of the trick, like half cabs. Even decades later, he still ends footwork lines with a half cab impossible. In 84, he was doing a half impossible to truck. And in 89, he even did a full cab nosehook, with a mute grab.

As we know, in 83, Mullen invented the Ollie. Even though the impossible isn’t really an Ollie trick, it still opened the door to the regular impossible, just because there was no early grabbing or hooking the board or anything – so it’s in the same category. So when he first did it, it was called the Ollie impossible. You’ll hear freestylers still call it that to this day. It’s tough to say when he invented it, but that first clip was from 84. It probably wasn’t too much earlier.

By 88, he was even doing them nollie – nobody was doing nollie at that time, and in 89 he even did one up a bench and even up a curb, on a street board. So Mullen not only invented the trick, but every variation of the trick and also was one of the first guys to do them on street!

By 88 and 89 though, street skaters were starting to catch up, with Ed Templeton being a standout. Ray Simmonds even did a front foot impossible around that time. In 1990, pretty much every skate video that came out had an impossible in it. You couldn’t have a street part without one or two. It was the biggest trick in the world.

In 91, Daryl Grogan, one of the best impossiblers of all time, was doing 540 impossibles.

Rodney came back in 92 and showed everyone he was still the champ with the most technical impossible variation ever seen – ollie impossible late varial kickflip. Whew. He basically shut down impossibles in general with that.

Shortly after 92, impossibles died out entirely, and weren’t seen again by pros for at least 10 years, maybe more.

If you saw my Merlin Twist video, you would recognize Ocean Howell. He had some of the best front foot impossible tricks. He says “Impossibles were cool. Then pressure flips got cool. But then all of them kind of disappeared. Anything that had that scoop feeling was out.”

Rodney Mullen agrees. He said, “It has a real scooping, dragging nature, and it was pushed out, a to a degree, along with pressure flips.”

I’m going to cover pressure flips more thoroughly in the future, but basically what happened is that they got out of hand.

Big Brother magazine talks about pressure flips in 92, and basically complains that they’re low and awkward compared to a cleanly popped ollie-based trick. You can see what they’re talking about a few pages later with this sequence. I found actual footage of this trick too. Just look at it. He just tips the board over and uses the air time of the ledge for it to flip twice, then just kind of falls on top of it.

Pressure flips can be done well, like this one by my friend Tony. But weird stuff like this was just so lame that the whole category of scooped tricks became uncool. Impossibles got thrown in with that, and suddenly, pros wouldn’t be caught dead doing one.

The mid 90s were a really judgmental time. Try to do an impossible, no comply or varial kickflip in a video and you’ll probably get laughed off of your pro team.

So that’s what happened to impossibles. When I would do them in the mid 2000s, people would stare, like it was some crazy unknown trick. I’m happy to see them come back.

If you want to learn the trick, I made a trick tip video for it about 10 years ago. It’s a great one to learn and you should definitely give it a try.

Well that’s all for this time. What do you think about impossibles? Did they deserve to get banished from skateboarding? Are there any other old school tricks you wish would make a comeback? Let me know in the comments.

1 thought on “What KILLED the IMPOSSIBLE?”