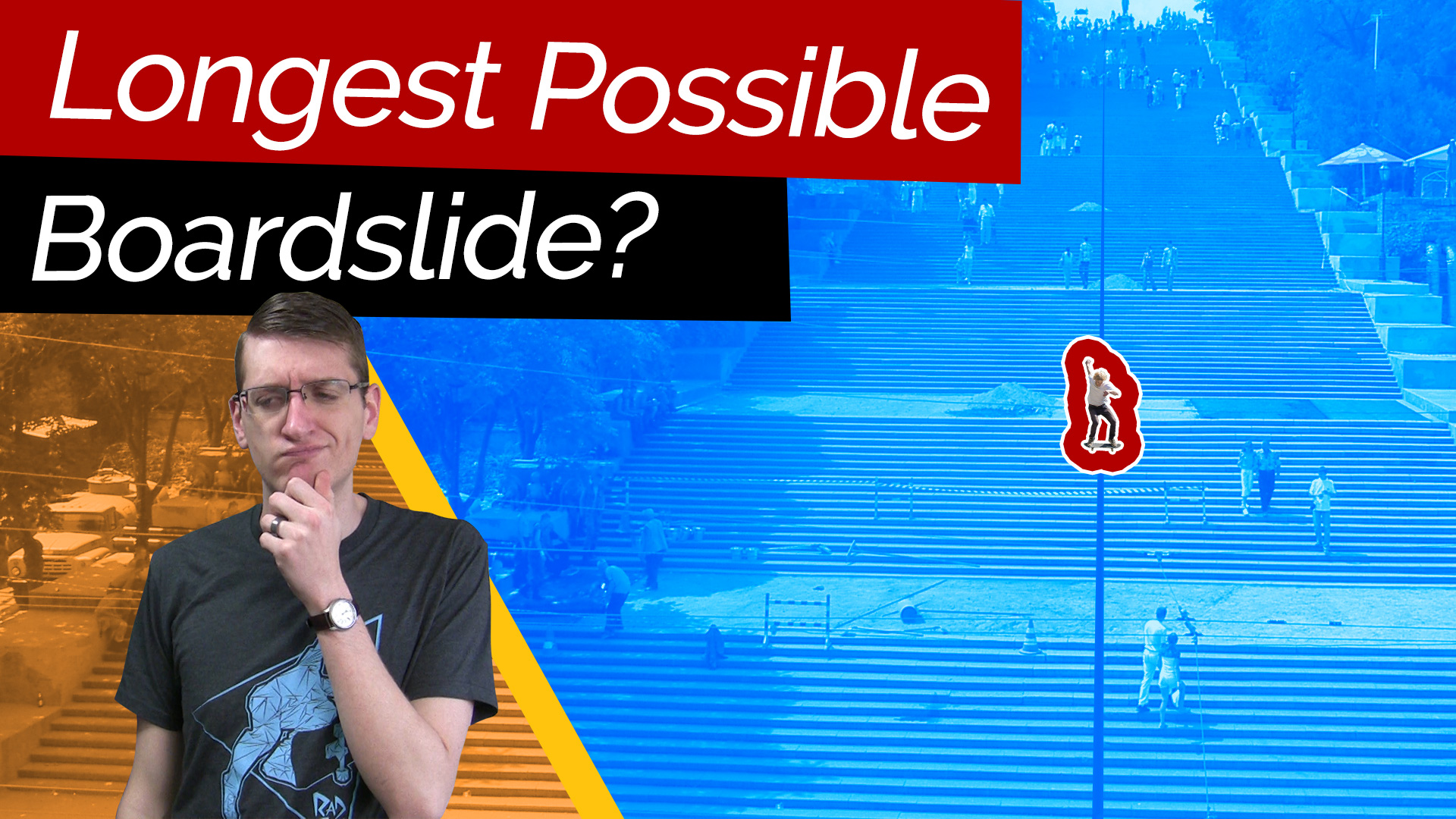 In the last video about impact and physics, I calculated how much of a drop you could handle before getting hurt.

There were a couple of comments from last time that I wanted to talk about up front because I’m going to be using the same numbers this time. A few people asked for clarification on the distance aspect of the gaps. And yeah, if you were landing on a bank tilted up like this, it would make a big difference because you would have to absorb the forward impact too and land completely stopped.

That would make a difference if you bailed too, because you’d absorb that impact with your face. And I think this is why a lot of people get tripped up. Ollie a stair set, bail out and land on your feet, and you hit the ground harder than if you rolled away. But that’s because your feet and ankles are absorbing your speed.

But for a land, it doesn’t matter because you keep that forward momentum. Other people were wondering if the speed would affect the impact somehow. That’s not how it works. If you were to shoot a gun and drop a bullet at the same time, they would hit the ground at the same time.

Here’s a chart I found. Apparently they tested this on mythbusters. In practice, the fired bullet was .009 seconds later, because of wind resistance. If you are bullet shaped and you’re going a few hundred miles an hour, then yes, your impact will be a thousandth of a percent less.

Yeah the bullet would have more impact, but that’s because it stops. If it rolled away at the same speed, there would be no difference. Yeah, bullets have rifling, tennis balls have top spin, basketballs have bottom spin, but a skater has none of that, so it’s pretty simple.

I’ve also had a lot of comments about how gravity has to chase you down and less of it can grab you if you move fast enough. And that’s sort of true, if you’re following the curvature of the earth and it’s falling from below you as you fall toward it. But that’s called being in orbit and you have to go about a thousand times faster than the speeds we’re talking about here. For gravity itself to change, we’re talking about either being miles up in the air, or going close to the speed of light. So there’s no need to get too fancy with it. We can stick to regular Netownian physics for a person going 20 miles an hour.

The only way the speed affects you is if you lose some of it. Land kind of sideways and roll away slow. Land so hard your wheels deform and that takes some of your speed, then sure, there’s a small effect. But again, we’re talking about perfect technique here. Landing straight, absorbing impact smoothly.

Another question: doesn’t this spread out the impact? That’s how it works in parkour, right? Yeah, but you aren’t covering any ground. You’re always on your skateboard. You aren’t absorbing some impact in your legs, then some on your shoulders and back and then your feet again. So that doesn’t really apply.

Imagine being in a train car. You’re standing on some cargo boxes and you jump off. Then the train starts moving, you climb up and do it again. Is it going to feel different because you covered distance this time? Are you going to fall slower because gravity doesn’t catch you? No.

The other thing people were asking about is Jaime Thomas. How did he survive the leap of faith? Well this actually fits the numbers pretty well. The leap of faith is over 18 feet. I’d say he had about a 75% chance of injury based on what we talked about in the last video. And a dude broke his leg doing it, so that tells you something.

I found a compilation of people trying the gap, mostly inliners. Nobody rolls away from it, but they don’t seem to get horribly injured. But it’s less impact when you bail in this case, because you don’t have to go crazy fast. You can absorb impact with your legs, then down to your hands, then just a little bit on your face. But a solid landing would be very very hard. You can always tweak the numbers in the last video though. If you are really tall and you land in a super squat, you can get a little bit more slow down time, and that would lower the average force of the landing.

OK, so now that we’re all on the same page, let’s take a look at the numbers.

In the last video, I calculated that you can hit the ground going downward at about 22.5 miles per hour. But to go that fast down, how fast are you going overall?

Here are my assumptions. I’m going to be using El Toro as a model here. There are a ton of different handrails with different materials and angles. A steep metal rail is different from a mellow concrete one or something like that. So this is going to be answered in how many extra steps you could have on El Toro, basically.

First step is to get some numbers. I took the chart by tenterhooks, which I used last time, and I got about 32.5 degrees as the slope of the rail. So let’s bust out our trigonometry skills. I found this calculator and plugged in what we have, 22.5 miles per hour down and an angle of 32.5. This is what we get.

The actual speed of your slide is 41.9 miles per hour. That will mean that you absorb that maximum 22.5 going down. That’s completely ridiculous. Can you imagine a 42 mile per hour boardslide? That would be absolutely terrifying.

I want to point out too, that I’m going to round out the 3 foot drop at the end. We’re assuming you just slide all the way to the ground and land it perfectly. It’s not going to make much difference, and it’s a whole lot simpler to do without it, but I wanted to point that out.

But how fast do you start, and how long do you have to be on that slope to get up to speed?

I found this footage of Arto Saari doing a front board, and I examined the footage to try to figure out how fast his approach was. It’s gonna take some guesswork, but it’ll get us in the ballpark at least.

I took a look at this spot on the ground, and watched how many frames it would take for him to pass it. Here it is lined up with his front wheels. When does it match the back ones? 3 frames is too little, 4 is too much. Let’s call it 3.5 frames. That’s .11 of a second, and he’s traveling one board wheelbase, which is about 17 inches. That works out to be 154 inches per second, of 8.75 miles per hour. And that seems about right.

But… There’s something missing. That’s completely frictionless. That would make you accelerate a lot faster than you really would during a slide. So I tried to look up friction numbers that might help. Unsurprisingly, there isn’t a lot of good info about skateboards in particular, but I found this engineering website, and it says that wood on clean metal is about .2 to .6 coefficient of friction. I’m going to go with .2, on the lower end, because the varnish and polish on your board is going to be lower than just raw wood, like it’s talking about here.

So I plugged that back in and got a new acceleration number of 3.61 m/s2. Plugging that back in, the number jumps up to 46.5m, which is 152.6 feet. That’s the length of a boardslide down an El Toro style rail that will give the maximum amount of impact you can handle. Landing this would be very close to the Lyon 25 in impact. But how many stairs is that?

Before we look at that, I wanted to look into a couple other things. Would your board burst into flames from all of the friction, or maybe even wear all the way through?

I looked up some formulas for this, and it’s pretty much out of control. I don’t think I could get a real answer on how many degrees your board would warm up during a slide this long, but the more I read, the more obvious that it would only be a few degrees. You’re safe as far as that’s concerned. Ok, back to the stair count.

Let’s go back to the Arto Saari footage. This is the spot where he first touches the rail. This is where that 153 feet would start, but that’s not the top stair. So it’s going to be a bit bigger. It looks like he lands about 6 stairs down. That’s about 6 feet. Running that through our trig calculator again, we’re looking at about 7.1 feet of rail. Making the actual length of the rail 159.7 feet.

What does that look like? It’s the width of a football field, and just a few inches short of an Olympic sized swimming pool. It’s about half of a city block. This number is going to be huge.

So here’s what we’re looking at. The rail itself is about 160 feet, but you’re actually landing about here and sliding a bit less of it. And remember, we’re assuming the rail goes all the way to the ground to help us have a nice triangle to work with. In reality, the path of the landing would curve down slightly, but it’s so little that it doesn’t really help. I’ve rounded enough stuff off here that the couple of extra inches isn’t going to make it any more accurate.

Plugging this back into our trig calculator, we get a total height of the rail to be 85.8 feet. Looking at the footage, it looks like the rail is right around 3 feet tall, so we can subtract that out. I mean, it looks like more to me, but the California law for handrails is no more than 38 inches, which is 3 foot 2. So I’m going to call it 3.

So the height of the stairs alone is 82.8 feet. How big is that in stairs?

The stairs at El Toro are about 7.4 inches according to the chart. I missed out on this Jenkem article with real measurements of some of the spots I talked about last time, but it doesn’t have El Toro. The California state law is a maximum of 7.5 inches, so I think we can run with 7.4.

This set in the Ukraine is 192 stairs, but the stairs are smaller. It’s only a couple feet taller, but much less steep. So our imaginary staircase is actually MORE intimidating than this one.

Yeah. So we’re really close to the limit on actual drops, but on rails, there’s a ways to go. But nobody is going to do this. The danger is just too high. Hang up half way down while you’re going 30 miles an hour, gap down another 10 feet and then firecracker the last 20 steps with your face? You could die. So, perfect technique, one try – it’s possible. But don’t count on seeing anything like this soon.