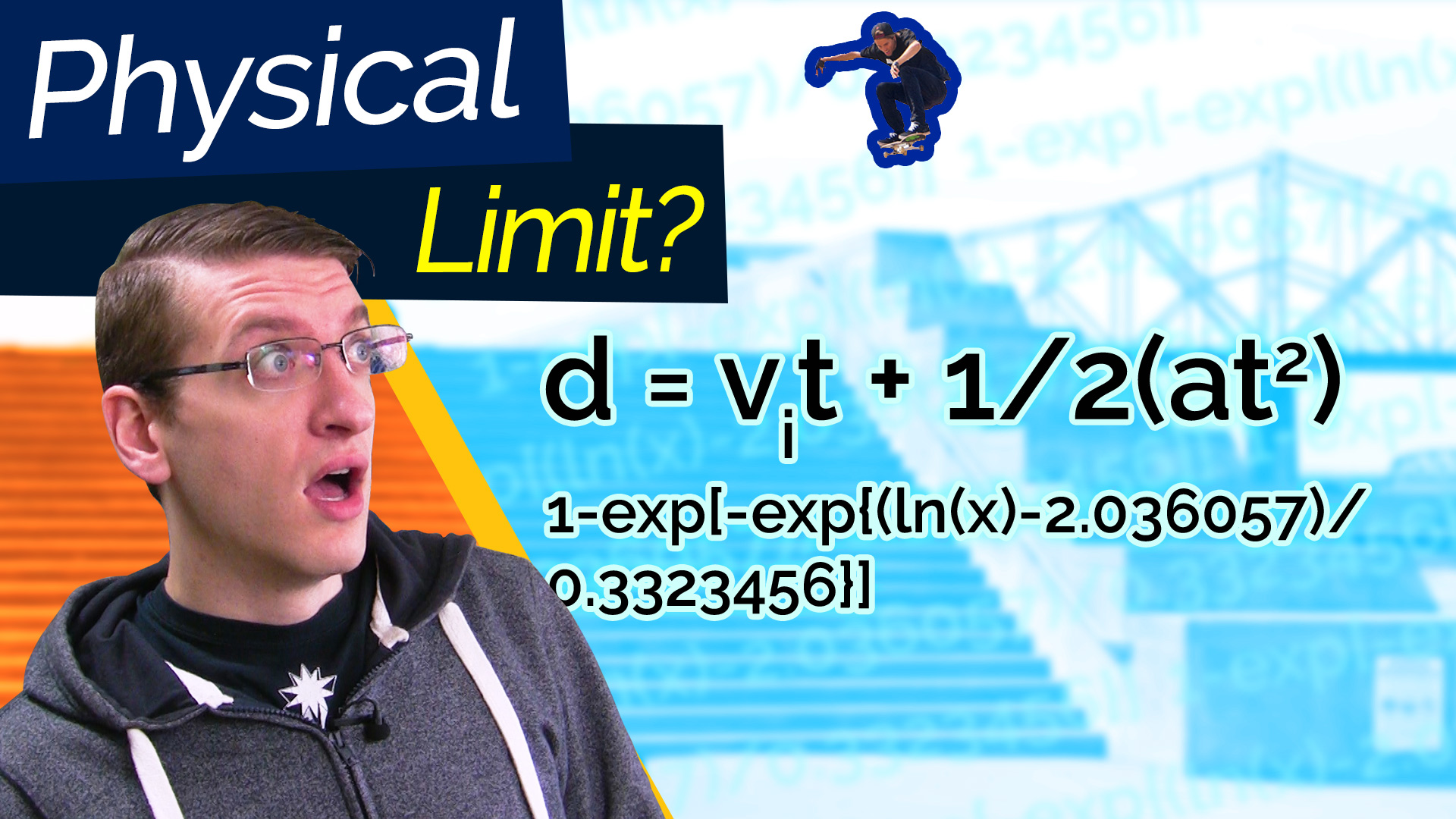 What’s the maximum distance you can drop before you break something? Here are the rules – Our imaginary skater has perfect skills and lands everything first try. His technique is perfect. So how high can he ollie from before he breaks something? What’s the limit of the human body when you take out skill and guts?

Keep in mind, different bone densities and stuff can have an effect on these numbers. This chart shows the strength of different bones over time, and it gets a lot lower as you get older. So keep in mind that there’s a bit of fudge factor here.

There’s also bone fatigue. The more stress you get over and over, the weaker the bone will be.

First thing to consider is the ankle. You’d think that would be the most likely to break. It’s what you hear about most. But I found a few articles. Luckily for me, there’s a lot of research on car accidents, where your feet are forward, and you rear end someone, so it’s similar impact to skateboarding.

And yes, your ankle can break really easily if you twist it, but it won’t twist if you’re landing the drop perfectly. So what we need to look at is fracture through dorsiflexion, or bending like this. And according to this article I found, the ankle is actually the strongest part of that equation. You’re much more likely to crush your heel bone, or calcaneus, tear your achilles tendon, or break your tibia, or shin bone. So let’s look at all of those and see what you can actually sustain.

First up is the tibia. I found a research article hosted by MIT in 2002. They take a very engineering, physics based approach to looking at how high you could fall without breaking your tibia. They assume you’re 60kg, or 132 pounds, and they run some numbers. The weakest part of the tibia is around the top of the ankle, and it can handle about 10000 Newtons. You can spread that force out by bending your knees though. A 1cm bend will let you survive a drop of about 1.7m or 5.5ft, but bending them half a meter, and you can get all the way up to 87m, or 285ft!

There’s a building in Ohio that’s 87m tall, called the Motorists Mutual Building. It’s 21 floors. No, you can’t ollie off a 21 floor building.

OK, this is pretty ridiculous, and clearly not right. Yes, maybe with perfect technique, you could absorb the impact from that without breaking your legs, but you’ll break 10 other things. This is the issue with trying to handle this like a physics problem. There’s too much other stuff going on. Could your muscles put out the amount of force it takes to slow down over that half meter? What about crushing all your foot bones?

I found a book called ‘Accidental Injury: Biomechanics and Prevention’. Yes, this is the type of stuff I read for you guys.

It talks about Achilles preload, which is about how much muscle stress you have when going into an accident. You may have heard that drunk people are less likely to get hurt in an accident because they don’t tighten up in anticipation. There’s something to be said for that, in certain cases.

So, back to your tibia. Yeah, it can survive 21 stories. But not if your muscles are tensed. That might hurt the strength of your tibia, but help your ankle… it’s a whole thing.

So how do you figure all this out with math? You don’t. You throw some cadavers into cars and crash them into walls and look at them afterward. And you end up with this chart, which is the probability of injury. It’s expressed as this formula:

I ran a few numbers, and 6.4kN gave an injury chance of 40%, which I felt was reasonable.

I reverse engineered the MIT calculations from earlier, but updated the weight to 160 pounds, and plugged in the new number. And I got…. 45.5m. Or 149 feet. Which doesn’t seem right at all. Can you ollie a 12 story building and roll away? Was Tony Hawk’s Pro Skater right all along?

Let’s go back to the book. I realized that 25 year olds are actually higher, but there’s no updated formula for what that exact difference is. It looks like about 40% chance at 9.2kN. And that’s just going to make it go higher. There must be something wrong with the MIT calculations. And there was. Georgia State University has a calculator buried deep on their physics site. I plugged in some numbers, and this is what I found. For a 160 pound man, he can fall 6.5 m, and absorb the last .5, meaning that he’s actually falling 6 meters. In English, that’s 19 feet 8 inches. And you’d hit the ground going about 25 miles per hour. That’s insane. How does that compare to spots that people have done?

Here’s a chart I found on the Slap forums by a user called tenterhooks. He’s mapped out some major spots. It’s not perfect, but people have been going out and measuring spots to get a realistic approximate on a lot of these. The dots on the side are feet. The Lyon 25 comes in at about 14.5 feet. Which is completely dead-on if every step is 7 inches, which is what you’d expect.

What about speed? It makes a gap gnarlier and scarier, and makes the falls worse, but doesn’t have much effect in an actual land.

No, because that force number is counting loose muscles, completely untensed for landing – since they were testing with cadavers. We’ve got to look back at the achilles tension issue. I re-read this a bunch of times and finally figured it out. This is saying that the the achilles tension, or preload, adds about 2000 newtons to the force. It says it ‘decreased the external force needed to effect an injury.’ That’s what this part is saying. In a 5066 N impact, the tibia actually received 7,293N, which was enough to fracture it. Later, it says that you can break a bone during electrocution because your muscles tense that much.

You aren’t going to land a trick loose, so let’s see what happens when we subtract the 2000N of muscle tension.

The new number is 5.1 m with a half meter of that being absorbed, down to 4.6 or 15’1”. Add in the height of the ollie, and Lyon is actually above this amount. This other gap in Louisville actually looks bigger.

So, we’re basically at the limit of human ability right now. These numbers were for average people, after all. Add in some really good genes and great bone structure, and your risk tolerance to 50 or 60%, and you might get another couple of feet. But our imaginary skater here does everything first try and doesn’t have stress cracks growing.