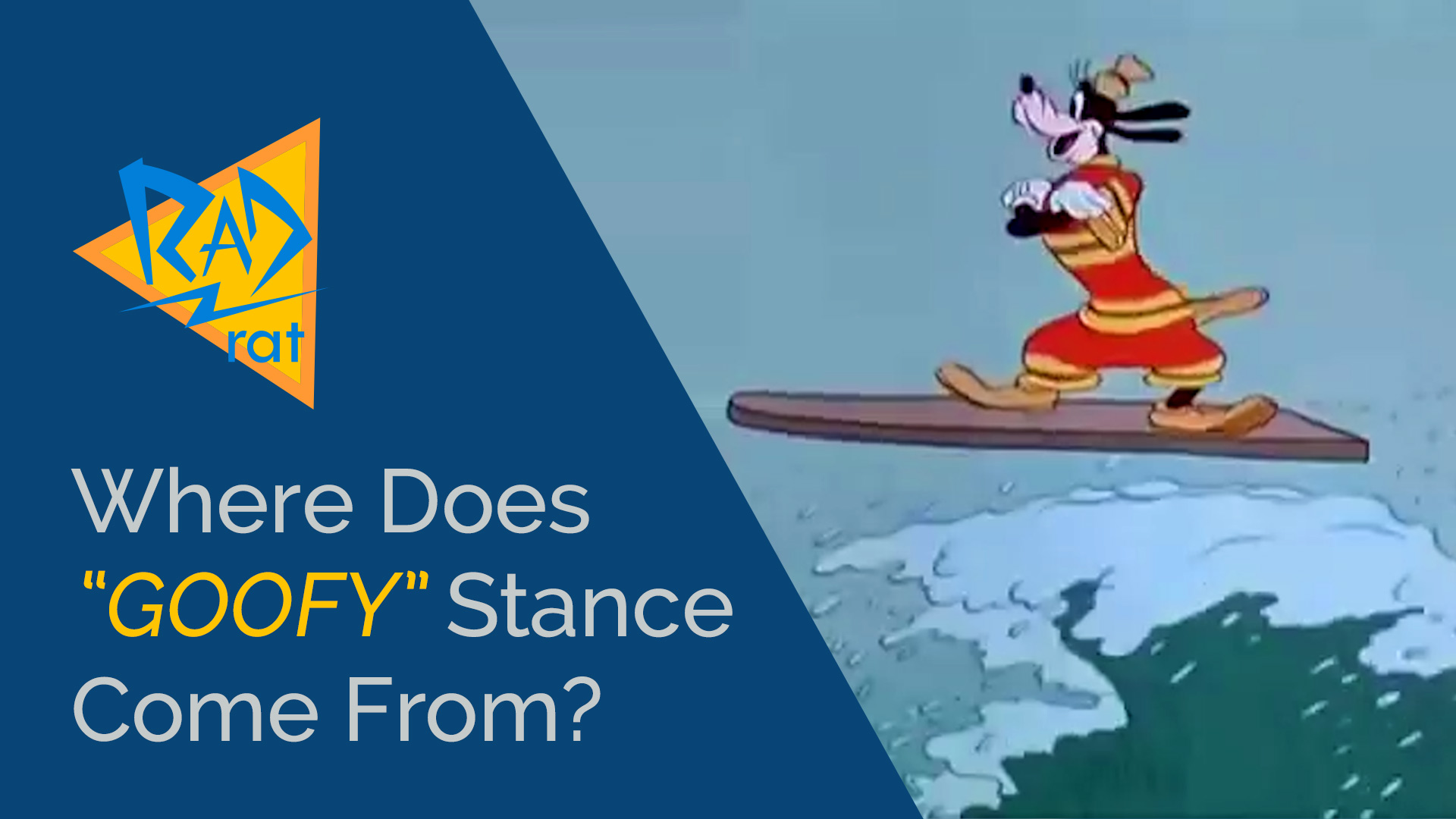 If you do any research about the term ‘goofy foot’, you’ll very quickly find that it’s not meant to be offensive at all, and that the word ‘goofy’ wasn’t even a bad thing at the time. It’s not meant to be an insult or derogatory in any way. In fact, it’s simply named after Goofy, the Disney character.

Here’s what the Goofy Foot Surf School has to say:

“Goofy Foot” is one of the oldest terms still current in surfing jargon. It describes a right foot forward surfing stance and was coined from a Walt Disney film in the 1950s in which Goofy surfed with his right foot forward.

The problem is, all of that is completely wrong.

The movie that they’re talking about is called Hawaiian Holiday, from 1937, not the 50s. And in the movie, Goofy does indeed ride in goofy stance. But the problem is, he also rides regular. He’s mostly unsuccessful in his surfing attempts in the movie, but he just stays facing the audience. There’s really no concept of which stance he’s in. It’s just like Bart Simpson. On top of that, the other characters in the movie switch stances too… So riding right foot forward could be called Mickey stance for what it’s worth. He and Donald Duck are surfing goofy right on the poster.

Also, the word “goofy” has always been a negative thing – coming from the word “goff”, which made its way to English around 1570 and meant “fool”. So both the Disney character and the stance are meant to mean ‘silly’ or ‘weird’ in some way.

So if goofy stance doesn’t come from Disney, then where does it come from?

The term seemed to become popular around 1962. Possibly a little earlier. This is 25 years after the Disney movie came out. So unless our dads and grandpas had the world’s first VCR, they only would have seen the movie on TV or a re-run at a drive in theater.

People who put their right foot forward are called ‘goofy foots’. This is a quote from Desmond Muirhead’s “Surfing in Hawaii: a personal memoir”, which was released in 1962.

The Concise New Partridge Dictionary of Slang and Unconventional English agrees with the 1962 date. It says: goofy foot noun a surfer who surfs with the right foot forward. Most surfers surf with their left foot forward. AUSTRALIA 1962

A year later in ‘63, the magazine Paradise of the Pacific helpfully defines some surfing terms for us like “kook” and “hodad”. For Goofy, it defines it as “a strange type”. No mention of it having to do with stance. Maybe the writer didn’t really understand what was strange about them.

The term was common by then, and in fact there were two songs referencing goofy stance in 1963 – “Goofy Footer Ho-Dad”. And another one simply called “Goofy Foot”.

OK, so that’s when the word comes from, but why? Is it really that uncommon and weird to be goofy? I looked up some numbers.

Mpora estimates it being about 70/30 in snowboarding. Of course, they also think it comes from the Goofy character, and they don’t cite any sources. But they do point out the interesting theory that since the right foot is controlled by the left brain hemisphere – which is used for spatial awareness – that that’s why it’s usually in the back for control.

I’m not so sure that works for skateboarding though. Your back foot is more about power, and the precise flicks and movements are with your front foot a lot of the time.

I found some better numbers on skateboarding though. In a poll with over 1500 responses on Skater’s Cafe, the number is about 56% regular.

The Skatepark of Tampa keeps a database on skaters who have come to their park, and they have stance information on over 4000 of them. That number is actually exactly the same – 56% regular, 44% goofy. In other words, not very uncommon or weird. At least these days.

Back in the 60s, there was still a big problem being left handed. It was illegal in some countries. Even here, you might get beaten with a ruler in school for writing with the wrong hand. There was a lot of effort made to correct it. You might be accused of being connected to the Devil, or even communism for some reason.

I don’t have any hard numbers on handedness versus stance, but there doesn’t seem to be a strong connection there. 44% of people are goofy, but only 10% are left handed, so it’s not that all left handers are goofy and righties are regular. But the point is more about being in the minority group. Being a minority group in the 60s wasn’t always a comfortable place to be.

So think about surfing. If it’s more common to be regular stance – and it was. Just think of the name ‘regular’ or sometimes ‘natural stance’ – then a lot of surfers were probably pressured into riding regular who wouldn’t have otherwise. I bet, if there were numbers on this kind of thing, it was more like 1 in 5 or 1 in 10 who actually stuck to riding goofy back in those days.

Plus, there are some other issues that we might not think about as skateboarders. Now, I’ve never lived by an ocean and I’ve never gone surfing before, but I can imagine that if 5 guys all want to surf together and one dude is facing the wrong way, it could cause some problems. Maybe you’re more likely to get blindsided by one if you ride too close and you’re facing opposite directions, or he wants to ride the wave the opposite way. You could see how that one guy might be singled out and labeled with something like ‘goofy’.

This is all summed up in the book Studies in English from 1970, which says, “Surfers who have a right foot forward stance are known as goofy-footers, or simply goofy surfers. This is doubtless derived from the older American expression ‘goofy’, which means ‘ridiculous, silly, . . . nutty.’”

1 thought on “Where Does “Goofy” Stance Come From?”