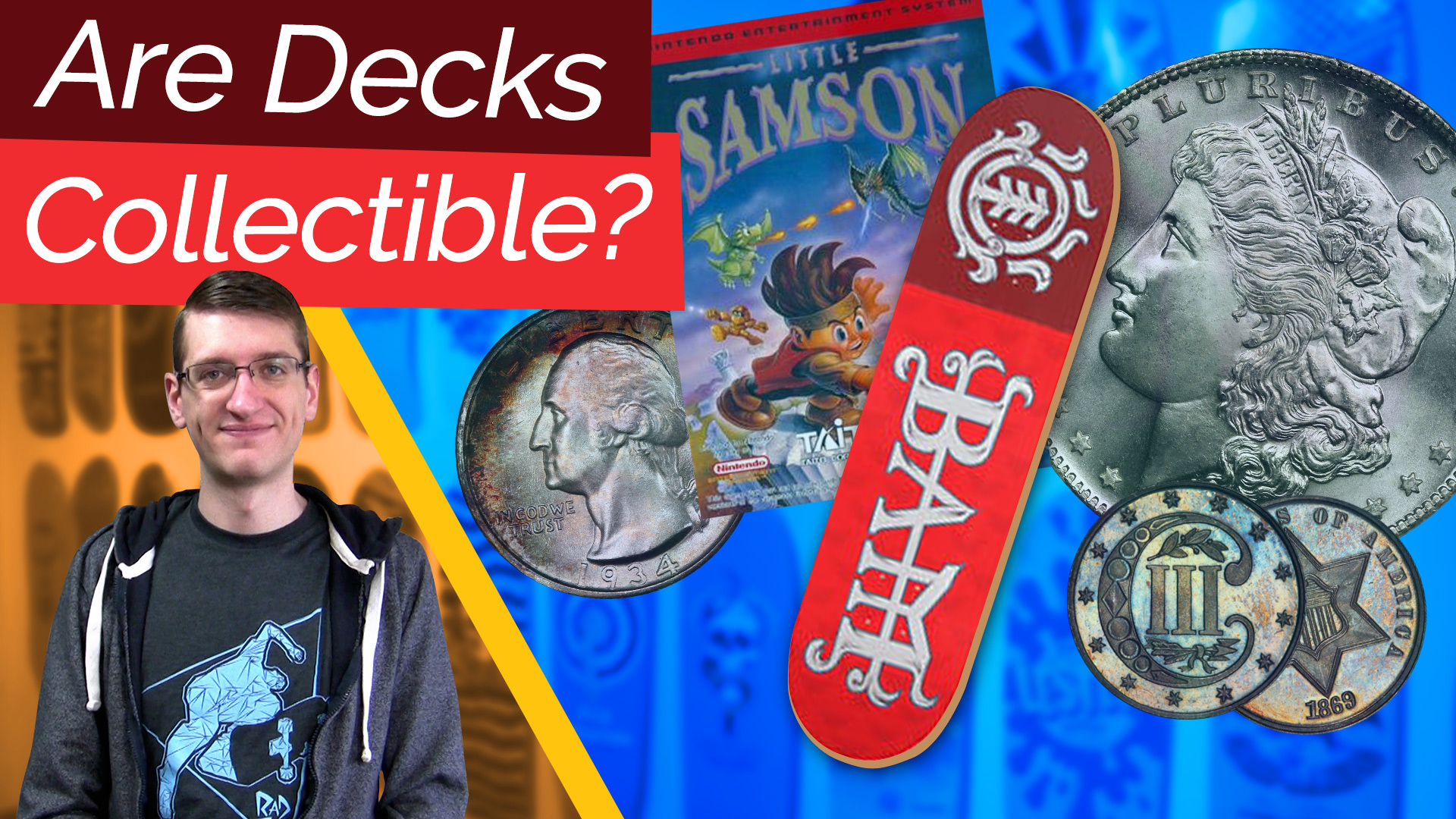 Greetings,
My question…
In your opinion will skateboard decks and skateboarding related items from 1995 to present day like shoes, wheels, trucks, ect. ever be highly collectible like the stuff from the late 70’s and 80’s?

You’re definitely not wrong. I looked up Tony Hawk and Rodney Mullen decks on eBay, and it’s not uncommon to see decks getting in the high hundreds or a little over a thousand. Smaller names can still easily get into the hundreds without a problem.

Will the 2000s boards get expensive too?

Yeah, they will, and pretty soon. If I were to make a retro rippers video on Mike McGill, I don’t think it would do that well. Most of my viewers are in their 20s, with a few getting into their 30s and a handful over that. Not a lot of people who watch remember the 80s when him and Lance Mountain and everyone were big. If I were to do one on Jamie Thomas or Chad Muska, I think it would be a lot more popular. And so I think there’s a lot of demand for late 90s decks, but there were also a lot more of them compared to the 80s. Skateboarding was huge in the 90s, so there’s just more supply to go with the added demand. The only real downside for 90s stuff is that they’re all popsicle shapes with different graphics printed on them. In the 80s, you at least had signature shapes that are a little more interesting to hang on the wall as an art piece.

So what I wanted to do is take a look at a couple of other types of collectibles and see what we can learn.

Let’s look at another collectible – coins. People have been collecting these for thousands of years. Ancient coins are still very collectible and valuable. But at some point, roughly 1933, we reach the modern era of coins, and the amount they made every year went through the roof. A quarter from 1932 is really expensive. They didn’t make any in 33, but ones from 34 are pretty cheap. There are a lot of collectors who hate modern stuff, because it’s just too common. You go from having maybe a few thousand of something during the civil war, to being a billion quarters in 1965. Keep an eye out, and you’ll see a 1965 quarter in your change within a week or two. They’re worthless as a collectible. Even in nearly perfect shape. With a billion of them out there, even a hundredth of a percent that are still nearly perfect are common.

But there’s more to collectible value than just how rare they are. In coin collecting, you have something called the trime. This is a 3 cent coin that they made around the civil war. At the time, they made these because stamps cost 3 cents, so the government thought it would be really handy. But everyone hated them, and they never got popular. Being unpopular at the time, they didn’t end up making a lot of them. You can find some seriously rare coins in that series… but nobody cares. One of the big reasons why is because they’re just so small. It’s 30% the size of a dime. Silver coins were valued based on their weight. But collecting tiny little coins isn’t popular because you need to get the magnifying glass out just to read the date.

So that makes me think about the obscure pro from 1994 that nobody remembers. He had one pro deck and it didn’t really take off. He got out of skateboarding soon and never left a mark. He has very few decks out there, and they’re rare, but they’ll never be valuable.

On the other hand, this is the most popular collectible coin – a Morgan silver dollar. It’s popular because it’s the opposite of the trime. It’s really big, bright and flashy. And it’s also pretty common. The government was legally obligated to buy a bunch of silver back in the day, and they made millions of these that just sat in vaults. So there’s an abundance of them available in almost perfect condition. Because of that, they’re more collectible. There are rare ones too, of course, and there’s always competition to get the best one. But the important thing is, they’re popular. Tom Penny, Bam Margera, Tony Hawk. Guys like that will have boards that are popular enough to be collectible.

So I think that’s really helpful to think about, but coin collecting is more about history than nostalgia.

But let’s take a second and look at video games, because it’s another type of collectible with basically the same life span. Both got started around the same time. There’s a point where the people who enjoyed something as a kid are old, have some disposable income, and they are nostalgic for that time. It seems to be about 20 years. So, NES stuff was super expensive and popular, then attention started to shift to super nintendo. Now it seems like the hot thing that’s really starting to gain some momentum is N64.

So I could see skateboarding being pretty similar. I started in 2001. I stuck mostly to blanks at that time, but I could imagine wanting to track down one of my early decks to hang on the wall. It might not be 20 years like video games, but there’s probably a time span where that makes sense.

There are some differences of course. You don’t use collectible decks like you do games. You can’t collect in bulk either, just because they’re so big.

And the other big difference is that you don’t really collect sets. Maybe you’d want all of the decks by your favorite skater – or every Flip deck from 2002. But I don’t see that really being the same thing. But there are a million people trying to collect every single NES game, even the ones that suck and that they hate and are only worth a dollar. Deck collecting is never going to be like that exactly.

The other major difference is that skateboarding is relatively small. Every kid played video games growing up. Not as many people skated. And I think a smaller percentage really care to recover their old disposable decks.

So I can’t tell you exactly how deck collecting is going to go. But I think that it’s going to keep expanding. If you’ve got a 15 year old deck sitting around, I’d hold onto it instead of gripping it up next time you need a new one.

13 thoughts on “Will Your Old Decks be Worth Big Bucks? Are Decks Collectible?”