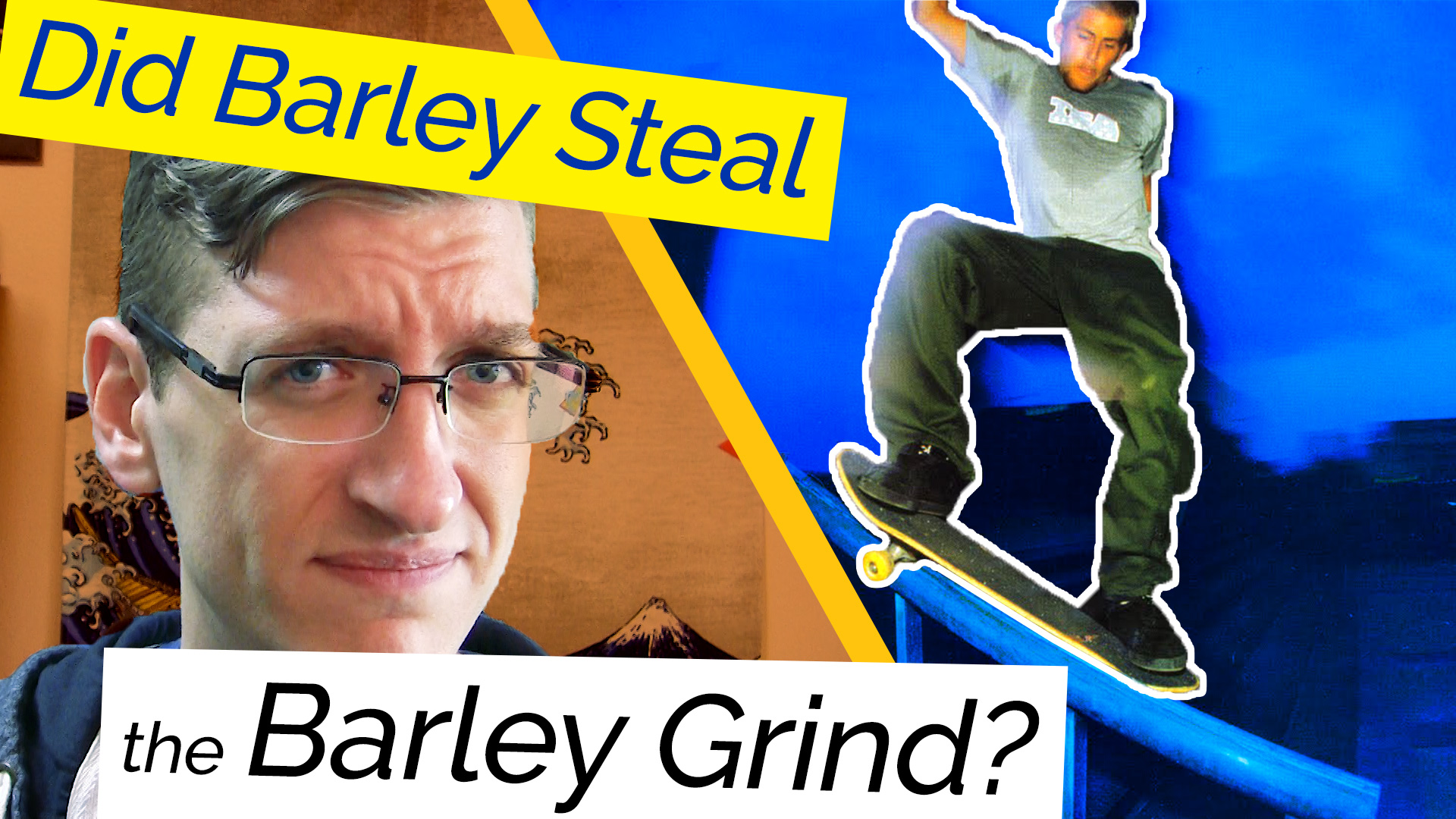 Today, we’re talking about some of the more obscure smith and feeble variations, including Barley grinds and Bennett grinds. But first, let’s all get on the same page because this stuff can get confusing quick.

Ollieing over the rail into a willy on the other side is called a few different things. Older transworlds used to call that a ‘baglady’, and I think snowboarders still use that. Others call it a Losi grind, but Losi himself called it a Whatchamajig on vert.

Now that we’ve got that figured out, let’s look at the spinning variations, when it can get confusing. Only 3 (and a half) of them have names, even though there are 80 variations. Yeah, 80. Think about it. You can approach frontside or backside – so 2. You can spin frontside or backside, meaning boardslide or lipslide direction. That’s 4. You can land on the front or back truck – 8. And you can land on either the smith side or the feeble side. That’s 16. Add in the 4 straight ones – smith, feeble, Willy and Losi, and you’ve got 20. 4 stances is 80. That’s a ton of different variations – some of which have never been done before. They’re all possible though.

Hurricanes are a 180 into a fakie feeble[curtis mccann]. You’ve seen this one a million times and it’s pretty popular. It’s like boardslide, but you spin just a little bit too far. Backside hurricanes were invented by Neil Blender in 85, and done first on video by Lance Mountain. [future primitive]The frontside version was invented by Tony Hawk in 1988.

Next is sugarcanes. The name is just a play off of hurricane, and the trick is a 180 to fakie smith, like a lipslide, but a little bit too far. This can be done both ways too, but you usually see them backside, and a lot of times you’ll see a lipslide to sugarcane. [danny minnick]

Lastly are Barleys and Bennetts, which are just like a hurricane, but instead of landing in a fakie feeble, you land in a fakie Willy grind – or a switch smith.

Weirdly though, there are only two ways to do a Barley grind – regular and switch. They ALWAYS approach backside and spin frontside. And that’s because that’s the only way Barley did them… despite the fact that he actually didn’t invent the trick. We’ll talk about that soon.

Lastly is the Bennett grind. A Bennett grind is just a frontside Barley grind. In other words, approach frontside and spin backside into a switch smith. Like a frontside hurricane, but on the other truck. Supposedly invented by Matt Bennett. But we’ll get to that.

OK, hopefully that clears everything up.

But back to the Barley – who really invented it?

Let’s look at his story. This is a quote from Donny Barley: “It’s really an extension of what Mark Gonzales was doing with all those controlled tricks in Video Days… in the garage on the metal beam. That little section was so impressively innovative to me. When I was living with Ed, I’d go skate the park in Huntington Beach every morning. I remember trying to learn all these different ledge tricks and it just came out of that. I don’t know at what point it became the “Barley grind” but I really enjoy doing them… the lock of a switch smith just feels so good.”

There’s another account of this in “Skateboarding: Legendary Tricks 2”, which helps fill in some of the gaps. It specifically calls out that he learned them on a flatbar in 95. It goes on to say: “The Barley Grind is a Switch Frontside 180 Ollie into a Smith Grind, and it is also a Frontside 180 Ollie into a Switch Smith Grind. It is a trick that can be done two ways. That is partly why the Barley Grind is legendary. When Donny Barley first did these grinds in the Welcome to Hell video, it blew people’s minds. It showed that there were still new grinds to be invented and also that the use of combinations of tricks together can create new moves.”

OK, so Barley mentioned Gonz’s Video Days part, so let’s take a quick look at it. He does have some really cool stuff in this parking garage section, like this alley oop 180 to 50-50, a 180 50-50 to lipslide, and then this – most importantly. It’s an alley oop 180 to switch feeble. Sort of like a Barley grind, but actually harder because both trucks have to clear it. This is one of those variations I mentioned earlier that doesn’t have a name – it’s just a frontside 180 over to switch feeble. I guess some people are calling it a novacane, but that hasn’t really caught on. Or this one – backside 180 to switch feeble. This could be called a Sieben grind, but that name was kind of a joke from Thrasher in 2005. The writer, Sieben, “invented” it in his mind but never landed it. Haslam did the “Seiben” grind the opposite way in United by Fate. There’s also this one by Danny Minnick in 92 that doesn’t have a name.

So that Gonz video was in 91. In 95, Barley landed it on a flatbar, and in 96, he released this video part in Welcome to Hell. This is a sick line – switch barley grind, and a regular barley grind, back to back on rails. The first time the trick had ever been done on a handrail.

But was he actually first to land it in general? To find out, I asked the SECOND guy to land it on a handrail, Dan MacFarlane. He was able to give me a bit more information about it.

This is Curtis McCann in Celebraty Tropical Fish, the Powell video from 91. He’s got a few different smith variations, including this one… a Barley Grind. This is 4 years before Barley learned it on a flatbar, and 5 years before it was in a video part.

Is Curtis the inventor? Well, it’s tough to say – there’s another contender.

This is Rick Ibaseta in New Deal’s video 1281 – which should be required viewing for everyone who skates. If you think you invented something, it’s probably already in here.

Right here, toward the beginning of the part, he does one. It’s straight on, and you could argue that it was more like Gonz’s trick than a Barley grind…. But don’t worry, here’s another one. And he does it switch too, as you can tell from the quick 180 that they used to do back then to make it more obvious. There’s really no denying that that’s a Barley grind.

So, who was first? One of the biggest issues with my research is that I wasn’t actually skating back then. I was 3 in 1991. So I don’t know exactly when these videos came out. You can get the year pretty easily, but the month is harder to come by. But Dan MacFarlane WAS around back then, and he confirmed that Ibaseta’s was actually first.

So, if Barley wasn’t first, does that mean that he stole the trick? Let’s go back to that book I quoted from earlier, “Donny does not know if he was truly the first one to do this grind, but he is stoked that his name is linked to the trick. Michael Burnett, who is a famous skate photographer, is credited with actually naming it the Barley Grind.”

So there you go. No, he didn’t invent the trick, and he also doesn’t really take credit for it. He came up with the idea himself, but he doesn’t claim to be the first person to come up with it. And he also didn’t name it after himself, Michael Burnett did. So I’d say he’s off the hook as far as stealing the trick is concerned, but the credit truly belongs to Ibaseta.

Now what about the Bennett grind? Again, this is a Barley grind the other way, approaching frontside.
A lot of people will debate if this trick even needs its own name. It’s just the opposite direction of a trick that’s already out there. The problem is that it’s named after a guy who didn’t do them this way. So it would be kind of weird. Of course, I don’t think Steve Caballero invented the FRONTSIDE cab. Let me know what you think about this in the comments. Just like Barley, Bennett says that the name came from someone else. It was named in a caption in Thrasher. So we can’t blame him too much for that.

The only benefit of having the name is that you don’t have to argue whether it’s frontside or backside. A lot of people will call a Bennett a backside Barley, even though you approach frontside. Again, it’s just like a frontside hurricane but on the other truck. And Bennett himself even calls it frontside.

But whether it deserves a name or not, it still has an inventor. Was it Bennett?

I tried to track down a date for when he invented the trick. The best reference I could find was on the Ride channel, where the author says he was doing it before he met him at Damn Am in 2001. I can’t find much more than that. If you know more, let me know.

Here’s the thing – there were 10 years (or so) between Ibaseta and McCann doing the Barley grind, and when Bennett came out with his version. Is it really possible that nobody on planet earth thought to do it first? It seems pretty unlikely. There might be someone out there with footage on a tape in their attic that was never released of them doing the trick. It just seems unlikely.

Chris Haslam agrees. When asked about taking credit for NBDs, he said, “For me, dudes like Brian Lotti and Ocean Howell make it hard for me to claim a trick because they did so much. If it happens for somebody like Matt Bennett (Bennett Grind) or Donny Barley (Barley Grind) they are lucky because they did tricks that people thought sucked and were able to make them cool and because of that it became their signature move.”

So what he’s saying is that these tricks were done already – they just were named after the first person to really make something out of them – like Barley taking them to handrails.

It’s kind of like K-Grinds, after Koston. I have a video about that here. No, he didn’t invent them, but he made them popular and took them to the next level with more variations. So it’s not too bad to give him props for THAT, as long as you don’t call him the inventor.

But although it might seem obvious that someone did it at some point in the 90s, the fact is – I haven’t seen any footage of it. I did a ton of research and just couldn’t find anything. Dan, who I mentioned earlier, never saw anyone do it before him either.

After I made a video about this, the truth finally came out…. It was Aron Lucier in 1991: