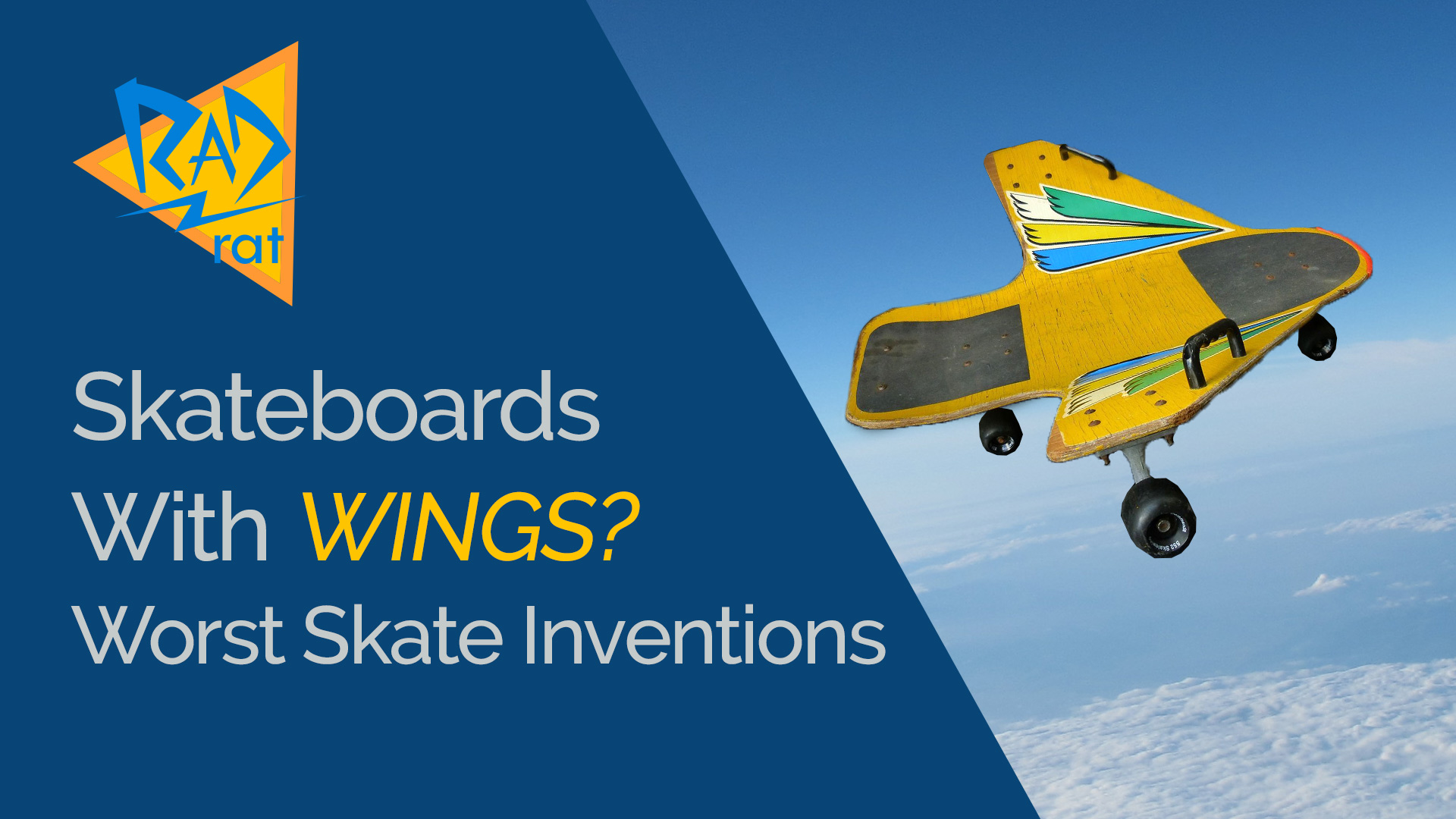 In my research, I’ve come across a lot of really weird products that have been made for skateboarders over the years. For the sake of this video, these gimmicks are random skate products that don’t really do anything useful, or were at least way overblown.

A good example is my first one, the Skate wing. Just look at this thing! Can you imagine carrying this thing around? You’d have to carry it in the back of your truck and dump it out in the street.

The Skate wing is an Australian invention. Apparently they made them out of wood, but later made plastic too. Probably because the price was too high. They’re apparently also known for getting a lot of stress cracks because of the weird shape. It was designed by a yacht racer. For some reason. It’s 33 inches long and 30 inches wide. It’s got skids and even RAILS on it, as if you’ll be doing boards slides on this thing! Can you believe that?

So it’s got handles and extra wheels on the sides. I guess you can crouch down and carve so hard that you tip over. It might be fun for about 10 minutes or so.

That’s not the only weird specialty board either. How about this one? The Wheelee board. It’s got this super long kicktail with a third truck on it. And then, of course, a little third anti-kicktail at the end of that. So what’s the point? Spinning 360s, supposedly. They already make special steel wheels for spinning 360s. But at least you can swap those out when you’re done. This thing you have to live with looking like that. Oh, and you can do ‘power turns’, whatever that means.

But it comes textured, so you don’t need grip tape, which is nice.

Next up is bridge bolts. They clip over your deck and take the place of 2 bolts each. I have no idea why. It saves you, what? 1 second each when you set up a board. Apparently some people set them up sideways so they’d catch more on ollies and give you more air, but that doesn’t seem to be their purpose. I couldn’t tell exactly what they were for. It seems like it would do nothing but get in the way. By the way, notice the doubled holes on the nose here. That’s an adjustable wheelbase. I wouldn’t call that a gimmick because it was helpful for making the board adaptable for street and vert. You could choose one set of holes or the other.

Next is lappers, which were actually really popular. You might have heard about them before and wondered what they were. Here’s a picture. They’re these really weird plastic sliders that cover up the kingpin and the rest of the hanger. The idea is, on lipslides or disasters, you’re less likely to hang up because they’ll ease you back into the transition. I’m sure it would help every now and then, but they encourage bad style where you can just kind of flop in and put, and they add a bit of needless weight to your setup. I saw an interview with a pro from back then, I don’t remember who, and when he stopped using them, he said he never got why he started in the first place. They were pointless.

I have two more weird truck add-ons for you. First is copers. They’re just plastic covers for the grinding surface of your trucks. A lot of this stuff would have helped make your board last longer, but man. One of the most satisfying things about skating is grinding stuff. Forcing your board to grind along the concrete or whatever. And it sounds awesome too. But copers ruin all of that. Plus, again, they add weight. So what’s the point?

The other one is z rollers. Kind of the same thing, but built in, and metal. They had these rollers that would actually roll along the coping. Again, these must have felt horrible, like screeching rusty grinds.

At the same time these weird things were popular, Grind King invented inverted kingpins, and guess what? They didn’t catch on for a long time.

That’s just the start of the protective gear though. Of course there are tail skids, nose guards and rails, which I get. The nose guard is weird, but I don’t think it’s too crazy.

But did you know there was a tail skid for the TOP of the tail? They were called heel bones by Powell Peralta. The idea was that they would help with your precision? So you get the steeper tail without the unwanted benefit of actually getting any pop out of it. But I don’t think you would grip over it, so it would actually hurt your skating more than it could possibly help it.

Also, we’ve got lace savers. These actually made sense to a degree, but obviously didn’t stick around for very long. These weren’t too terrible of an idea, but shoelaces are pretty cheap. They remind me of this shoe cover product I’ve talked about before in my new technologies video. But I think in any case, adding something extra to your shoes and giving you less board feel is generally a bad thing, you know?

But they didn’t just try to protect your board and shoes, you could also protect your fingers. Those awesome 80s fingerless gloves would leave your poor little fingies in danger, so Santa Cruz invented Rip Grip. These are stickers that are thick and spongy and you would put them in places that you grabbed the board for some extra cushion and grip. These were hugely popular back then in the late 80s – and they came in all kinds of crazy bright 80s designs.

It’s kind of crazy – a decent complete back then would have run you almost a hundred bucks – not too far off from today. But once you buy a few packs of Rip Grip, tail bones, nose bones, rib bones, and heel bones from Powell, lappers and copers, bridge bolts… you could have almost doubled that cost. But to be fair – that board would have lasted forever. I see boards like this at antique shops from time to time. If I ever see a good one, I want to buy it and try to skate it. Usually they’re either painted over, or they’re off brand Walmart stuff from back then. And they want 60 bucks for them. BUT – they’re still standing. These boards could take a serious beating.

OK, I’ve got a few more left for you. First, single-bearing wheels. These came out in the early 90s. On paper, they kind of seem like a good idea. Use half the bearings – right? But in practice, they didn’t work all that well. Apparently, the bearing would pop pretty easily. Which makes sense. There’s just a spacer in there, which doesn’t really seem to lock in all that well. Plus, the single bearing is taking the stress and force of both bearings together. So think about doing a bluntslide. You ollie in, and the wheels stop. Then your axle nut on this side and the truck on this side slam into them and force them to slide forward. That’s a lot of force for a single bearing with some spacers in it. It’s no surprise they didn’t work out.

Next is skyhooks! I’m sure everyone has tried something like this when they first started skating. These are devices that attach to your nose and tail and lock your feet in. Then you can jump and the board stays with you. It’s fun to do by tying your shoelaces to the board or duct taping your shoes down. But this was an actual product that you would buy and use permanently. It’s really weird. It seems like they came out in the 80s, even though both vert and flatground ollies were already invented. I mean, this picture looks like it’s from the 70s, so I guess I’m not entirely sure about that, but they lasted into the 80s at least. Weirdly, these have caught on with longboarding a bit more these days. You can find a lot of people using them. Maybe they help you stay locked in when you’re rolling over rough surfaces or something. Or you can powerslide with them without slipping off. I’m not entirely sure. If you use skyhooks these days, let me know in the comments.

Lastly, and worst-ly, is these. So, there are scooters, which are bad enough as it is. But at least they’re a thing. You can turn the handlebars and carve around on it I guess. But this is just a way to attach handlebars to a regular skateboard. You can’t turn with them, and they do absolutely nothing except make it impossible to do any tricks at all. I’ll never understand these. Is skateboarding really so hard that you need to lean on something while you’re riding around? And the worst part? You would see ads for these in legit skateboard magazines back in the day. It’s just embarrassing. Believe it or not, these still exist. There’s a brand called CaliBars that is still making skateboard handlebars. Supposedly they’re for helping kids learn how to skate, and they kind of take the high ground over scooters, saying that it’s at least a skateboard. As long as it’s 4-year-olds, it might not be the worst thing, but come on.

So those are the ones I found for this time. Let me know what I missed in the comments. I know there was a ton of crap back then that I’ve only started to scratch the surface. Let me know if you’ve ever used any of these things before too. I’d especially like to know about the bridge bolts. I just don’t get the point of those.

1 thought on “A Skateboard with WINGS? Worst Skateboard Inventions of All Time”