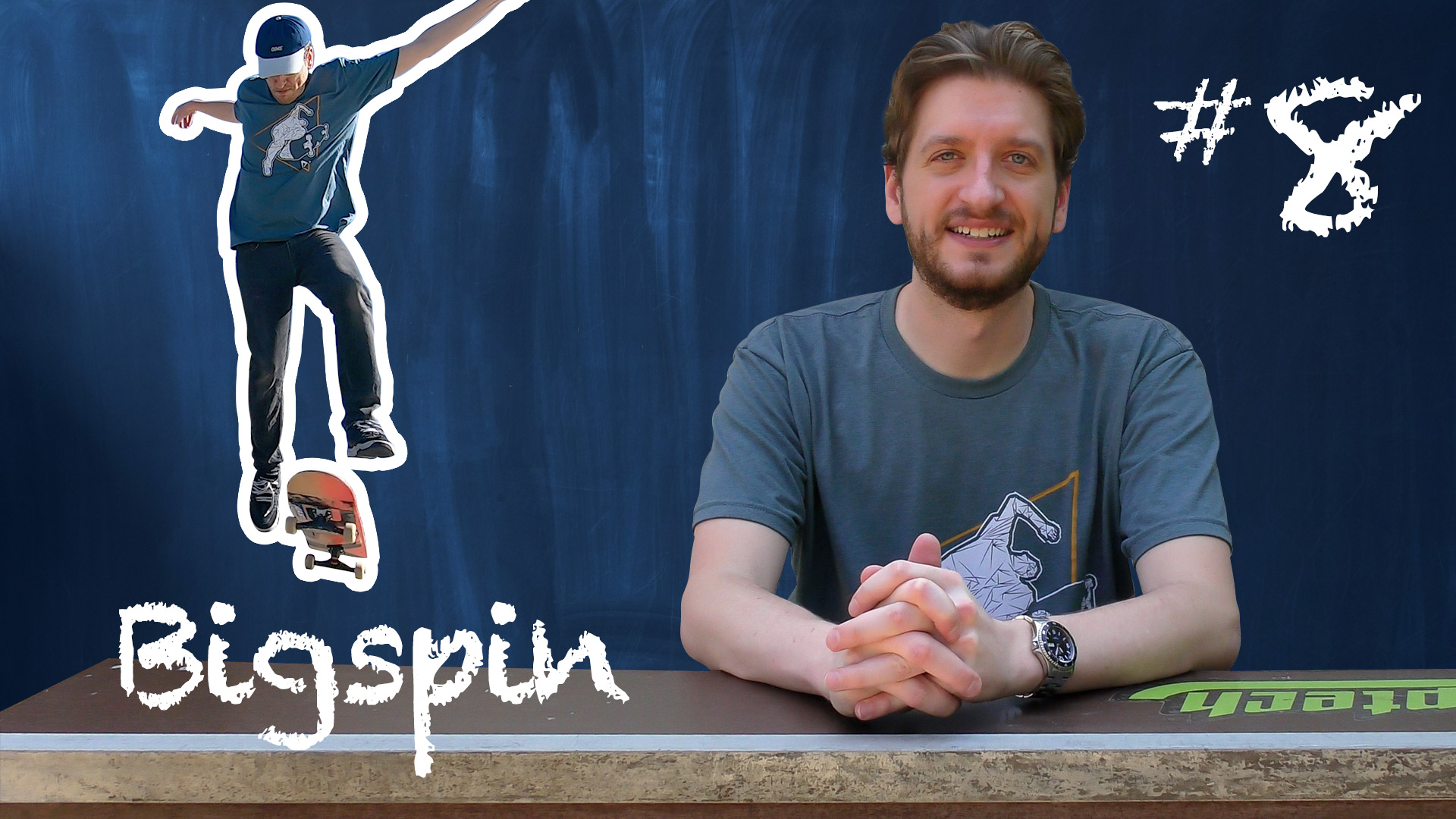 You need to be comfortable with shove its, of course, but you don’t technically need to know half cabs. This trick doesn’t have a pop, so it’s not directly built off of it, but it’ll definitely help! At the least, learn how to roll fakie and pivot around to forward.

So while we are combining two tricks, don’t worry too much, since we picked the easiest ones.

Set your feet up like you do for your shove its. I tend to move my back foot a little more centered on the tail so it’s easier to land back on it. Your front foot should be in about the same place as normal, but you might need to tilt it a bit less so it’s easier to see where you’re going.

Get rolling fakie, and wind up your shoulders. You might have to do even more than you would for a half cab, since you’re adding in the board’s spin to yours, which requires a bit more energy.

The strategy here is to do the fakie shove it and land into a pivot. In theory, you could do it exactly like that, but ideally, we’re going to only do a little bit of a pivot at the end.

As you unwind your shoulders, start the shove it and spin your shoulders along with it. At first, it’s okay to land however you land, even if it’s sideways. Don’t worry about it too much yet. But pay attention to your foot position. If you’re landing back on the tail, which is technically the nose now, then you’re in good shape.

The full thing feels like a one foot jump. You jump and do the shove it off your back foot, then land with most of your weight back on that foot to land in the pivot. The pivot itself is not very complicated. It’s mostly having the momentum and weight balanced correctly. If you anticipate it right, it should come together.

Even though the trick is simple, that doesn’t mean it’s easy. There are some issues you can run into, like adding an accidental flip. This is never fun, because you never get so lucky that you get a full flip. It’s always a quarter or a half and you end up tripping over the board in the air.

For the most part, you can fix this with your foot position. Having your back foot flat and covering as much of the tail as possible is your best bet to correct this. Since we’re not popping this, there isn’t much reason to be on the ball of your foot, so you can use this to be more stable.

The next thing that happens is under or over rotating. The hardest I slammed while recording for this whole series was doing this trick. My body was underrotated and the board was completely straight. When I landed, the board shot out and I slammed directly on my knee and turned it purple the next day.

A good move to try, while learning, is to aim to do about 75% of the trick. You can still land and roll away, but you’ll lose a lot of your speed, which is a bit safer than landing perfectly straight, and it’s easier than doing the whole thing, so you have a better chance of getting it done. Make sure you wind your shoulders up enough. Don’t be afraid to exaggerate it a bit to make sure you rule that out as an issue.

But what if the board flies away from you when you do it? Pay attention to your weight placement. You don’t want your weight completely over the back truck, but it should be close. If it’s too far over the tail, the board will probably stop, or at least fly back the way you came.

The only way to take this trick further is to land it cleaner and faster. Doing a bigspin rolling forward is much, much harder, and I wouldn’t worry about that for now. But when you’re ready to try it, I made a trick tip for it a few years ago.

Set up a skate bag. I just take a reusable shopping bag with me, but you could use a backpack or whatever else you’ve got. I bring a candle with me to wax stuff. A skate tool, extra batteries and power banks for my cameras. It’s not a bad idea to have some extra hardware and maybe a spare bearing or two.

Do some street skating. If you’ve been skating in a driveway or a skatepark, try to find a new location. Find a bank to do tricks on, or a curb that you’ll need later, and skate there. Even if you’re just doing the same stuff for now, finding spots and knowing the best places to skate is an important skill in skateboarding.

Next week, we’re doing our first ever slide trick, the noseslide. Get ready!