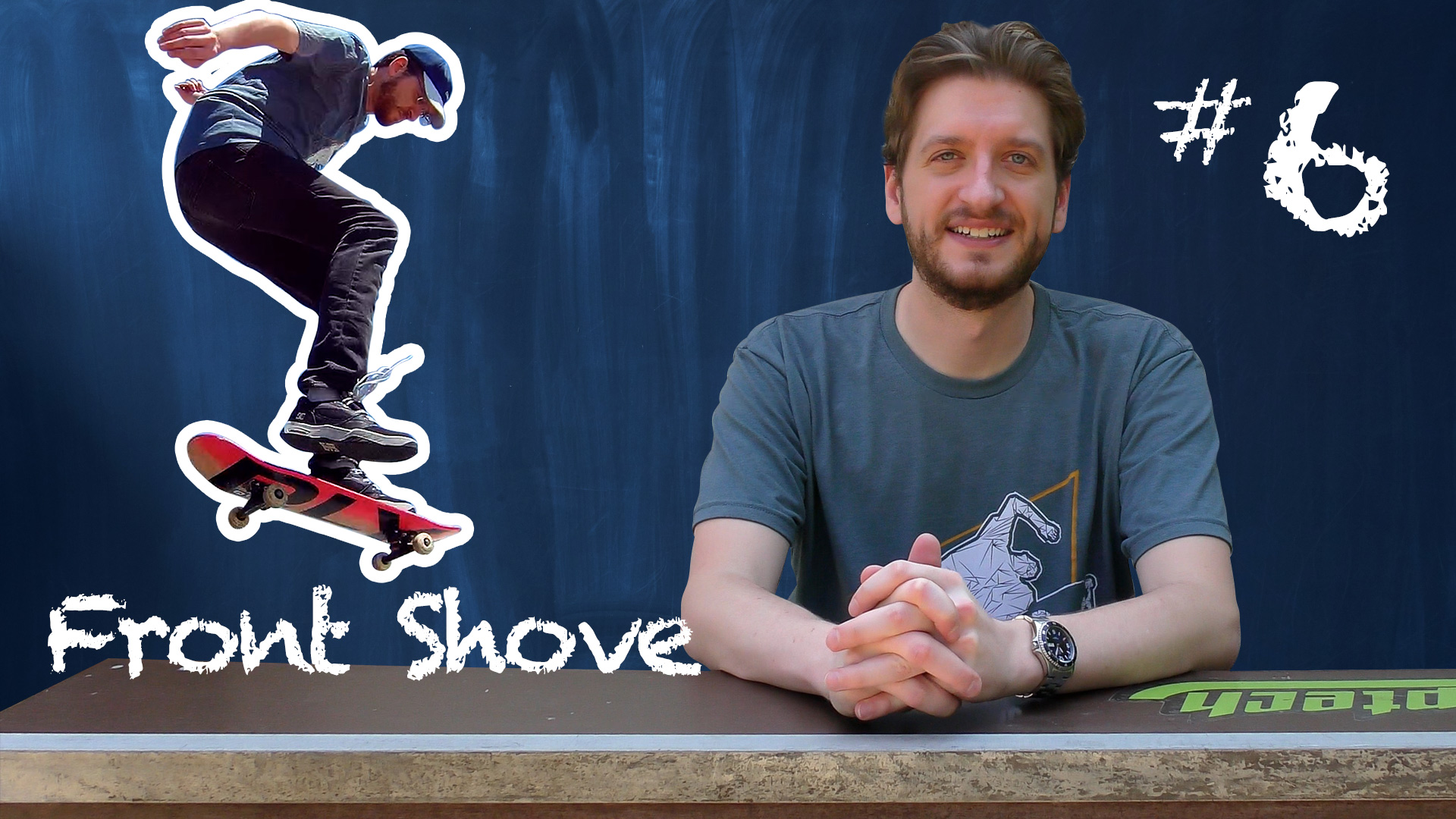 Today, we’re going to mix things up and try shove its going the other way, frontside. It’s a bit tougher, but hopefully you’ll get the hang of it.

Pop shove its and frontside 180s are going to be a big help, although, you could theoretically do this as your first trick. In fact, it was invented before the ollie, despite having the pop in it.

Put your front foot a little bit before the bolts, with your toe hanging off slightly. Just like with the regular shove it, this foot’s job is just to get out of the way. Hanging your toe off makes that a bit easier, and it also helps balance out your back foot, which hangs off the heel side of the tail. You can exaggerate this as much as you want, even by having just the tip of your toe on the edge of the tail. There’s some experimentation you can do with that, and the amount you pop. My foot position might not be the most comfortable for you, or maybe it will be. Make it your own.

If you’re comfortable with the pop shove it, you’ll know how this trick works. This version is a bit tougher because you’re scooping ahead of you, and most of it is blind. Something else to point out is that this trick really should be popped, at least a little. Just throwing it into the spin without at least a slight pop is a bit tougher, and probably not worth doing.

So, as you start the jump, point your toe and slice it down and forward pretty quickly. At the same time, hop backward a little bit. With time, the trick stays with you a bit better. But at first, you’ll most likely have to follow it in the air.

The board will spin around, and keep your front foot up, since it can get in the way as it comes around. In my case, I tend to keep my foot closer to the board so I can catch it quickly and help make sure it doesn’t flip. But trying to learn that as you learn the trick itself might be too tough.

At this point, it’s all about commitment. You can’t see the board all that much, so you have to just trust in yourself and put your feet down. Hopefully the board is there waiting for you.

So what can go wrong with this one?

The first problem you might run into is just having the board fly away from you. Keep in mind, you have to overcome the pivot of the wheels. It’s not like you’re starting to do a kickturn and then jumping off the board. You have to force the tail forward. Don’t think about the nose going backward, think about the tail going forward. And work on your foot position. If your heel is down below the surface of the board, it’s a lot easier to throw it out ahead.

What if the board flips though? Keep your front foot flat. As the trick starts, your front foot is keeping the board stable. You can have quite a bit of contact with the board as the spin starts, but be careful to not poke your heel out and do a bit of a heelflip.

How about landings? With backside pop shove its, it’s really easy to do half of the spin and catch up to it by spinning your body the other way. With front shoves, it’s a little more difficult because you’ll be spinning and landing backward. But it’s worth a shot if you want to ease your way into doing the trick. In my case, I think it’s a bit easier to spin the board too hard and over rotate it a little. If you land at an angle and slow down, you’re less likely to slip out. But you don’t want to make a habit of landing badly on purpose. That’s just a crutch you can use if you have to.

The only thing to do with this one is get a little more speed and a little more pop. We’re not at a point where you should be trying this into or out of grinds or manuals, so just work on consistency.

Have fun! And yes, that’s advice. We’re doing a very structured trick learning system here, but once it’s over and you’ve got these basics, I’d much rather see you practice on trying what you think will be fun instead of what you think you’re supposed to do. This isn’t your job! If you like cruising around and doing weird stuff, then do weird stuff! There’s nothing wrong with that.

Practice your kickflips a bit more this week. Hopefully, with these last two tricks, you’ve found some time to get a bit better at them. You’ll need a bit of flip trick practice for what’s coming next week, so try to get that practice time in.

We’re going to try heelflips. They can be tough! But for some people, they’re easier than kickflips. So we’ll have to dive in and see how it goes.